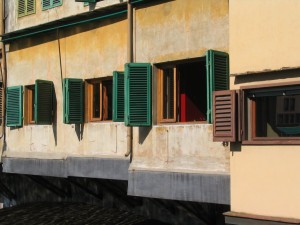 The cacophony of broken glass punctuated the seemingly endless monologue by the inebriated character outside our hotel window in Florence. His animated voice echoed up and down Via Faenza, bouncing off centuries-old blocks of buildings in this area situated only blocks from the Duomo and the Stazione (central train station).

We arrived without any difficulties after a long flight originating in Medford, changing in San Francisco and Munich, and finally terminating in Florence the following evening. While not really a 24-hour flight (time zones wreck havoc with international travel), our sleep patterns will be impacted for a couple days while we adjust.

The Florence airport is quite small, but after SF and Munich, it was a delight. After retrieving our bags (we were the only / last flight of the day), we exited the terminal onto a busy street. Waiting near the taxi stand was the Airport Shuttle we’d read about somewhere, and for 4 Euros each we rode the 20 minutes to the Stazione in central Florence. It was only a 15-minute walk along cobblestoned streets to our modest hotel (Hotel Nuova Italia, Via Faenza 26) and quiet –except for the broken beer bottles, now being swept up in the narrow street below.

The most interesting sounds accompany foot traffic, particularly embellished when one is wide awake in the middle of the night (morning?). The rhythmic stride of a man wearing hard-soled shoes along the cobblestoned street below our window. The voices of a passing group of girls, animated with the excitement of the evening (now early morning) slowing rising from the distance. Coming within earshot, it becomes evident that several separate conversations are going on simultaneously, with all of them speaking louder than the other trying to be heard. And heard they were, creating quite a racket! A phrase here, a word there (“whatever” and “like…” come to mind) easily identified their nationality. As they continue on their merry way, all chattering with the same intensity, their echo fades off as would a train passing by. In fact, I thought of the Air National Guard “fly over” each year at the Ashland 4th of July parade.

Motor bikes are plentiful here, partly due to their fuel economy but more so because of the narrow streets and their ease of maneuverability. Their industrial cousin is a 3-wheeled variety referred to locally as an “APE” and pronounced “ah-peh” (unlike their primate cousins), equipped with a flat bed and plenty of torque. One parked just up the block, and its driver methodically removed something metallic – they sounded like trash cans (but everything sounds like trash cans at 4am). As each was unloaded and noisily wheeled to its destination, I wondered why s/he would be working so early in the morning with such determination. This went on for quite a while, and I guess I faded off.

As we left this morning after a traditional “continental” breakfast, I observed a newly constructed outdoor metal-floored terrace constructed in front of the trattoria (family-style restaurant – bar) just across from our hotel, complete with iron railings and flowers galore. What a difference a night makes!

PS: The photo is a close-up of the Ponte Vecchio Sooney and I took while walking in the Oltrarno (the “other side of the Arno River”)

PPS: I guess the big lesson for today is to make sure you request an “interior” room from ANY hotel in Florence. Other than that, the place is very nice.