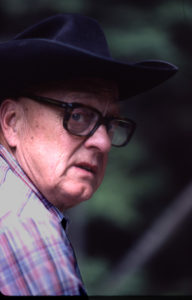 Sooney quietly spoke with her mother over the five thousand mile phone cable, her expression announcing grave news. Our daughter Alicia’s only Grandpa Don had died. With the news, a period of reflection began; anguishing with guilt at our having chosen to teach overseas, limiting the quality time spent with Don. Then there was a tearful journey through the photo album, an anecdote forthcoming with each snapshot.

One picture immortalized Don’s dogs, Sandy and Schultz, panting out the window of his car, ready to ride. He loved those dogs, and spoiled them accordingly. Another photo showed Don proudly displaying a Great Northern Pike; seven pounds of fighting fish, still attached to the lure that finished him. Perhaps it was this “slide show” of wonderful memories that gently eased us through the pain and bound our collection of wonderful times spent together—most recently the previous fall.

The manifest beauty of autumn colors in Montana is overwhelming, and the earthy smells of decaying leaves lingers on, penetrating the years. My first 22 years in Los Angeles never prepared me for the exhilaration that accompanies seasonal change in the Rockies.

Following 5 years of overseas teaching in Indonesia, we decided to return with our 1-year-old daughter to the US and spend some time in possible areas of relocation. We were determined not to return to southern California where my parents lived, so our choice of giving Montana a shot was pretty simply. Helping us make the decision was the fact that Sooney’s parents had retired to Whitefish years earlier, had offered us space in their spacious home with recreational amenities literally in their back yard, and that air pollution wasn’t yet a part of the local dialect. So it was good-bye tropics and a mighty big “howdy” to big sky country.

With the fervor of born-again pioneers, we tackled autumn tasks. Putting up fruits and vegetables, airing out the camphor-smelling winter clothes and refilling trunks with summer wear were all activities that had never meant much to foreigners like us. Overseeing the whole show was Don, my father-in-law. A retired administrator, he eased us through the ritualistic preparation of several months of heavy snow. He was relieved to have help collecting firewood, although he wouldn’t likely tell you so to your face. His back hurt considerably and in our eagerness to pick up some mountain lore, he comfortably slipped into the role of foreman.

We’d search hours for dead larch trees to fuel our stove. There was plenty of fir and the quick-burning Lodgepole Pine, but they were inefficient for heating. The hard, dry Larch, usually the victim of lightning, would elusively stand ghost-like among living neighbors. There was jubilation whenever we discovered a skag, and chainsaws reduced our treasure into stove-sized morsels. Don would pause during the stacking, admiring the rising pile.

It wasn’t the type of work I remember hating as a teenager; those hours of chores that always seemed to conflict with my free time. Plundering the forest is invigorating, and we always found time to feed the chipmunks who scampered about among newly fallen leaves.

It’s easy for me to evoke Don’s image; tall, skinny, and bald as Glacier Eagles. As if to accentuate his lean frame, he affected gaudy western shirts, complete with flapped pockets and mother-of-pearl buttons. Coupled with Tony Lama boots peeking out of dark polyester slacks, and topped by a black Stetson that complemented his horned-rim glasses, he was a stereotypical metaphor for the ubiquitous stand of trees, punctuated only by the Marlboro cigarette he habitually sucked.

Not much of a sleeper, Don would lounge on his plywood reinforced mattress, filling ashtrays and mimicking Jimmy Swaggert evangelizing from the television. He loved reading historical biography, and there was always a book nearby. Many an idle hour was spent reliving the past while Big Band music swooned from the stereo.

“Boy, can that gal sing,” he’d remind us. “They don’t make music like that anymore. Play it again, Tommy.”

We learned that he was a radio show “junkie” during his younger days in North Dakota. Don would imitate the orchestra leaders from his extensive vinyl collection of “radio checks,” uncannily recalling the names of the singers, featured musicians, and the locations of the broadcasts. His enthusiasm made those decades come alive for us, and we encouraged him to broadcast his tales on Whitefish radio, sharing romantic evenings at the Palladium or Catalina’s Avalon Ballroom. It never happened.

Hoster, as Don was known to his poker pals in town, was a regular at the Hanging Tree and Bucky’s Bulldog, both local saloons. He always held his own in card games, but abstained from the heavy drinking that went on. An reformed alcoholic, Don preferred Coke as his companion throughout the evening.

Each morning, he’d accompany Schultz, the graying Schnauzer affectionately nicknamed “Fartsy,” on walks to the rickety cluster of mailboxes down the road. The return was mostly uphill, and Schultz would leisurely retrieve tennis balls during the frequent pauses. He’d pore through stacks of junk mail, munching on his habitual snack of salted peanuts.

Occasionally Don and Myrle, his wife of thirty years, went out of state. Don was undergoing treatment for myeloma, a terminal form of cancer affecting the bone marrow in his lower back. Sooney speculates he got fatally zapped while witnessing nuclear test sites back in the 50’s. He was a press photographer for the LA Daily Mirror at the time, and there’s a family photo somewhere of him getting scanned with a Geiger counter. The surprised expression on his face in that photograph may have been a bit of foreshadowing. We’ll never know, but it’s reasonable. Don never burdened us with his illness, but a deteriorating lower disk, made raw by massive doses of x-ray, caused him excruciating pain. Difficulty sleeping had resulted in Don relocating to the small apartment above the garage so as not to disturb Myrle during his fitful night’s sleep. Before each trip south, he’d carefully go over the list of things we had to watch out for around the house. After all, Montana was “Big Sky” country and we were rookies.

A week after one of his departures, a cold snap hit the local area and temperatures plummeted. Don must have heard about it on the news, for he called that evening to have Sooney check out the water lines in the apartment. Without having to open the door, she realized there was a fire inside and the volunteer fire brigade saved the rest of the house from going up. The insurance inspector later confided how lucky we were since the whole place could have blown up there was so much heat in there. Apparently an electric blanket, neatly folded in preparation for leaving, had been left turned on high, and the small apartment became an oven. It was a week before things started melting; a shower cap left hanging on the faucet in the upright stall was practically touching the floor. The bathroom counter featured misshapen globs of plastic of former juice cups. The place was trashed, and about all that was salvageable were the studs and roof.

So we became carpenters—first stripping and then replacing the smoke-damaged remains. Don was overseeing the retrofit, smoking “cigareets” and constantly munching those peanuts. He’d painfully climb the stairs to the construction site and chat a bit while looking for something to salvage.

“Hey, Don, what do you want to do with these bathroom fixtures?”

“What?” he’d initially reply, again having refused to wear the uncomfortable hearing aid.

“The bathroom fixtures,” somebody would repeat, a few decibels louder. “They’re pretty messed up. You gonna replace ’em?”

“You know, Myrle and I brought those faucets all the way back from Mexico. Solid brass. Got a hell-of-a-deal. They’re four times the price in town. Go ahead and take ’em off. I’ll try a little solvent on ’em.” And then he’d get lost in the garage where he spent a lot of time. Later, we began finding empty vodka bottles stashed in the strangest places. Inside summer tires coiled snake-like in the rafters, behind the chain saw under the work bench, or under rags in the Goodwill bin. And always empty peanut wrappers, companions for the cigarette butts he thoughtlessly flicked away. He’d come on up to where we were working, have a look around, pound a nail or two, and then retire to the garage for one reason or the other. And so it went through early spring, the beginning of “slush,” and the end of our sabbatical from teaching.

We accepted new positions teaching in Kobe, Japan and, while international teaching satisfied our professional goals, Asia was a long way from loved ones. Don’s condition had gotten progressively worse, and he and Myrle barely managed through the following winter before he died in ’85. Fortunately, we got to spend that year with Don, we learned how much the cold northwest meant to him, and we learned that Montana wasn’t as compelling to us as it was to him. We sold our property outside Whitefish and eventually settled in southern Oregon. Nonetheless, that year with Don was profoundly important to our family, and his helping us make that decision was his special gift to us.