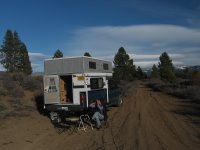 Here we are on “The Loneliest Highway in America,” Hwy 50 from Ely (eee-lee) Nevada to Reno and who knows what else. And lonely it is; 325 miles of desert with a couple towns thrown in for amusement—barely. But we had each other, Alice Munro reading her short stories from our iPod, and memories from 30 years of marriage to entertain us—some of them doozies!

Zion National Park was a day behind us, and the drive from the park’s entrance to northbound I-15 was only an hour or so through some beautiful country that resembled Zion but on a smaller scale. Traveling north on I-15 was pleasant driving for a change, considering we hadn’t shared lanes with anyone other than oncoming traffic since Flagstaff several days earlier. It was back to single-lane driving after another hour when we returned to desert conditions on the nation’s second loneliest road—Panaca to Ely. As we neared our destination, the lure of hot showers compelled us to spring for a clean room at a small motel that catered mostly to transient miners and gamblers. Being neither, we scored nonetheless and enjoyed the excitement of Saturday night in small town, Nevada.

After walking the length of downtown Ely a couple times, we chose an Asian restaurant for dinner, and were generally pleased. Our server was a sophomore at the local high school and, having worked there for a mere 3 weeks, entertained us with her goofy cluelessness.

“Does jasmine tea come in a pot?” she noisily asked the other server with a twist of her hips and a glance over her shoulder. “Can she have her choice of soup without ordering the dinner?” she asked again with the same movement. Her colleague calmly answered the second question while a customer helped her with the one about tea. Everyone was eager to help out, and our meal was delicious.

It was only after we’d finished that Sooney began feeling numb across her cheeks and into her forehead. She’d had an MSG (monosodium glutamate) experience years earlier after eating in a small diner in Indonesia. That reaction grabbed her chest and she thought she was about to die. I remember her pleading with me to rush her home so she could see infant Alicia one last time.

So here we were in Ely, Sooney flushing and rubbing her temples, and up comes our server. “How was everything?” she asked sweetly, and when Sooney asked if they used MSG in the food, she blanched. “MS what? We were the only customers left, there’s wasn’t anyone within hearing distance, so she muttered, “Hold on,” and disappeared.

The chef returned, noticeably alarmed, and admitted that yes, they did use MSG in the hot and sour soup. Nothing else. He ordered our server to fetch a glass of milk for Sooney as an antidote and remained with us until her symptoms subsided. This friendly man shared cooking experiences that began in Hong Kong and later at 5-star hotels in San Francisco. He informed us that more MSG is used in “steak house” cuisine than in Asian food, most notably the “au jus” served with prime rib. “Pure MSG,” he assured us as if we were being lectured by a health practitioner. The milk did the trick, and we walked the quiet boulevard back to the White Pine Motel, our WiFi connection, and a real bed after a week of camping in our wonderful camper.

Fast forward to about 4 pm the following day. We’d been driving forever and saw a massive dust storm in the distance. Just off the highway, an encampment of hundreds of white RVs were parked bumper-to-bumper in the middle of nowhere. Of course, the residents of nearby Fallon, NV, would take exception to that. We learned later that this was the scene of a weekly 35-mile dirt bike race. We’d seen another of these transient desert communities earlier that day, but had dismissed it as yet another of those vinyl oasises popular with nomadic retirees.

The setting sun backlit everything in sight as we approached Reno. Alas, there wasn’t any compelling reason for us to stop, wedding anniversary or not, and on we continued to Truckee, CA. We never made it, however, and headed north on Hwy 89 toward Quincy with plans to overnight in a National Forest campground en-route. No dice. Every campground was closed until May or something, so we bounced on a dirt road a mile or so and found a delightful campsite on Presser Lake—well, sort of. Presser Lake was, in fact, a river waiting for spring snow-melt to regain its glory. But a private river to us, and we slept soundly through a hard frost that rendered our external gray-water system dysfunctional. Come on, where’s the warm?