Trudging up the 14th fairway at Matoa Nasional golf course in Jakarta, Indonesia, I was nearly overwhelmed by the combination of heat and humidity. Although we teed off at 6:30 a.m., here it was pushing 10:30 and it had to be in the mid-nineties.

Matoa does not permit electric golf cars and, like Bandon Dunes, the Oregon gem, golfers employ caddies to carry the sticks. This works out just fine, because they know the course, give helpful advise, and make quite a sum for their services (at least the caddies in our foursome). It’s a good thing our round finished before noon, because the caddies were also fasting as part of the Islamic tradition of Ramadan.

Ramadan impacts nearly every aspect of daily life. Muslim or not, we are all awakened at 2 a.m. by loud broadcasts from the local mosques, of which there are several within hearing distance. The devout then take their final meal of the day and the closer you get to 4:30 a.m., the louder the cacophony, crescendoing into a finale that would, for sheer emotional value, rival that scene in Apocalypse Now with the helicopters flying into battle, Wagner blaring from huge speakers attached to their underbellies. Only every mosque is blaring something different (yikes!) and then, suddenly, all is calm. And this goes on, night after night, for several weeks. Although sunrise on the equator isn’t until around 6 a.m., eating must stop at 4 so that by sunrise no residual food remains in the stomach. Those fasting are not permitted to consume ANYTHING during daylight hours (including water). Our caddies nevertheless performed splendidly, and were equally grateful for the early tee-time.

A particularly memorable thing about the round were the other players in the group who were long-time Indonesian friends from our teaching days in Balikpapan, Kaimantan Timor (Eastern Borneo) and who now live in Jakarta. Our seven-day reunion with Rachmat and his extended family, coupled by our reentry into the complex social structure of affluent Indonesians, wasn’t that much of a shock. It was, after all, in this environment that we spent 5 wonderful years teaching in Balikpapan (1977-1982), and the service-sector employees (drivers, cooks, chambermaids, nannies, gardeners, pool-boys, etc.) perform essential roles in these households. In fact, those employed by our hosts are also provided a benefit package similar to those extended to expatriate overseas hires: health, pensions, vacations, travel allowances, and a family setting. Our dear friend, Sujilah, who cared for Alicia 25 years ago when we lived with Rachmat, continued to work in his household after we relocated to Oregon. She moved from Kalimantan (Borneo) to Java when he was relocated, and treated all children as if they were her own (including Alicia). Alas, our visit was a couple years too late, but she was able to leave a mortgage-free house to her beneficiaries that most other household staff could only dream of. 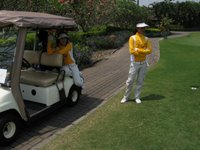 The round at Matoa was actually my second in 2 days. After completing our 28-hour journey (Medford > SF > Hong Kong > Singapore > Jakarta), Rachmat awakened me at 6 a.m. for the hour-and-a-half ride to Bogor, where we played the Klub Golf Bogor Raya. The driver then returned to Jakarta to pick up Emma and Sooney and they were awaiting us in the “Klub” restaurant when we finished a glorious round and had showered in the Bali-flavored locker room. The Bogor club is one of Indonesian’s best and, like stateside courses, had houses nestled back from the fairways. Some of the larger ones are allegedly gifts extended by the course developers to the mayor, chief-of-police, and head prosecutor. Wink, wink, nod, nod. Unlike the Matoa course, the caddies (all cute young women) didn’t carry your bag but drove the golf cars while we preferred to walk, which was often due to Bogor’s cooler weather. Their other jobs were fetching your club choice, marking your golf balls on the greens, fixing and reseeding divots, and staying awake (they were also fasting).

My biggest disappointment at both courses is the deplorable condition of the range balls (now there’s a nice problem to have). Perhaps due to unwanted additional exposure, little time is spent on the range practicing. In fact, it isn’t uncommon for players to meet in the café and, after a morning snack, head right to the tee box. There are putting greens near the clubhouse, and they’re used traditionally while awaiting your turn to begin. But I would think that with very little expense, the clubs could hire ball retrievers whose exclusive jobs would be to fetch errant shots that somehow found the dense rough. Easy for me to say, because there’s another important cottage industry on every golf course; reselling those same errant golf balls back to the golfers who hit ’em.

Saving best for last, the round at Bogor was a so-so 44-40, with the greens proving challenging due to the cut. The course, however, was impeccable, and Sooney theorized that walking a round of golf course is probably the least toxic place to get any outdoor exercise in this terribly polluted city. The round at Matoa was much better: avoiding difficult pot-bunkers plus a couple of 20-foot birdies set up the final tap-in birdie on the 18th that paid double skins. When the bets were settled, I had a stack of over 300,000 rupees in front of me. Remove the final 4 zeros to keep that in per$pective. Then, being the medalist (40-40), I got to pay for everyone’s lunch. So, in addition to a glorious day on the links, I went home with about 67 cents in my pocket. How’s that for a win-win day!