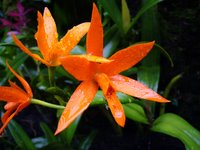 “I’m sorry, Mr. Viani, but your ticket from Jakarta, Indonesia, to Tokyo, Narita, is scheduled for 21 June. Today is June 20. I’m afraid you’ll have to come back tomorrow.”

Now I’ve been late for some flights, and have even missed one or two. But to arrive 24 hours EARLY for anything (not to mention at 4 in the morning!) is pretty damned unbelievable. Sooney and I looked dumbfounded at each other, dreadfully aware of the consequences of what the Singapore Airlines agent was telling us and madly processing what we were going to do about it. It was 4:45 a.m. and we’d just dispatched our friend’s driver who’d dropped us off at Jakarta International Airport in plenty of time for the 6:20 a.m. flight to Japan. And here we were—no flight, no transportation back to the city (an unpleasant thought), and numb with embarrassment.

We’d purchased our tickets using United Mileage Plus, and it turns out those tickets aren’t modifiable without a United Airlines manager’s approval. The Jakarta office opens at 10 a.m., and so the likelihood of catching our “scheduled” flight was nil. We decided to hang around in the departure lounge in the unlikely chance an agent in Singapore would intervene in our favor. When the 6:20 departed as scheduled, our belief in miracles plummeted. Hours sitting in the lounge did, however, provide us the opportunity for light reflection, taking our minds off the more dire matters at hand.

For instance, the drive to the airport shed more information about the religious observance of Ramadan. We’d seen entire villages out in the street, working off their final meal of the Ramadan fasting schedule. Hundreds of children were playing soccer in the buses-only express lane in the middle of the street. This is a popular playing field because there’s a curb designed to keep ineligible vehicles out and soccer balls in. Mind you, it was 4:15 a.m. when we drove through their game, still plenty dark, and nobody seemed particularly bothered by it. Ramadan profoundly affects all aspects of ordinary life.

Meanwhile, back at the airport, our friendly Singapore Airlines agent was making things happen, and she succeeded in getting us seats on the 9:30 a.m. flight to Singapore. Later that evening, we’d catch a red-eye connector to Tokyo at 11:45 p.m., and in the interim, we had a surprise day to play in Singapore. Sometimes solutions are more complex than the problems.

We arrived in Singapore at 10 a.m., gaining an hour because someone knew how much we looked forward to waiting until 11:45 p.m. What resulted was a smorgasbord of different modes of transportation cementing diverse activities together; planes, taxis, buses, and subways all played a part in our unexpected day in Alicia’s birthplace. The day unfolded pretty much as follows: we immediately visited the Singapore Tourist Office at Changi Airport, and got maps and enough information for a rough plan. We then took a taxi to the Singapore Botanical Garden and its lovely National Orchid Garden. The taxi driver was really friendly and helped us plan, making sure it included a visit to Chinatown after the botanical garden visit. Dodging from shady spot to shady spot for an hour, we discovered the “Mist House” and hung out there for a while, reveling in the cool spray and surrounded by thousands of gorgeous, fragrant orchids. We had a coffee in the d’liteful café and exited the huge garden near the Tanglin Gate bus stop for our ride down memory lane to Chinatown.

When we taught in Indonesian Borneo, Union Oil scheduled a twice-weekly charter jet between Singapore and Balikpapan. The plane was primarily used to transport the roughnecks that worked a 2-week on / 2-week off rotation out on the Union rigs. Teachers and other expats were permitted to fly for free on space-available status, and we often spent long weekends dealing with medical exams and shopping sprees in the then-affordable Singapore. The city we recalled from the late-seventies did not resemble the beauty that is Singapore now. We were particularly impressed by the huge trees and luscious foliage that had grown since our last visit 20 something years ago. Perhaps even more notable was the absence of the terrible diesel exhaust fumes that made walking from air-conditioned shopping mall to shopping mall hard to navigate back in the late seventies. The city is lovely, and the ease and affordability of public transportation adds to the marvel. 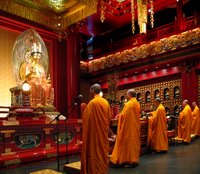 Our destination in Chinatown was the temple of the “Buddha Tooth Relic.” Restored recently in the authentic red lacquered style, Buddha bestows affluence to a few deserving believers, and we were able to help send influential vibes to the cluster who’d purchased candles, flower offerings, even small statues to leave in adulation to the benevolent Buddha. Chinatown is also near the traditional food stalls on Maxwell road, so we had some noodles and a beer for a couple dollars and savored the smells, colors, and atmosphere of colonial Singapore.

It was dusk, the weather was delightful, and we began searching for the bus that would deposit us (after an hour-long trip) at the International airport for our evening flight to Tokyo. Unsure where to catch the bus, we inquired at a “boutique” hotel (The Scarlet) and the bell captain asked us whether we’d ridden Singapore’s subway system. “Then you must!” was his decision, and off we went, his instructions and map in hand. For the price of a bus ticket (S$1.80,) the subway delivers passengers to Changi International in half the time, including a transfer. The event was marvelous, the trains first class, and the platforms impeccably clean. But we were in Singapore, after all, where they fine you S$1,000 for spitting on the sidewalk. Money is a powerful motivator, and we were genuinely impressed with how much has improved since our last visit.

The next morning we arrived in Narita, Tokyo, and resumed our journey in a more orderly fashion. It just goes to show you that there’s a first time for everything. That being said, I plan on making sure that this little episode doesn’t reoccur again. Perhaps an occasional glance at a calendar might help?