Like Zion National Park, Kamikochi is accessible only by bus. Located in the Chubusangaku National Park in Japan’s Nagano prefecture, visitors to tiny Kamikochi, elevation 5,000′, are dwarfed by majestic peaks in the 10,000′ range on both sides of a narrow valley, carved patiently by the Azusagawa River over the last couple million years.

Rather than a conventional city, Kamikochi more closely resembles a collection of lodges, most within walking distance from the end-of-the-line bus terminal that serves as exclusive transportation for all travelers. A visitors’ information center, a nature exhibit, and a small market are all clustered together in the bus terminal, and from here guests walk 10-15 minutes to their respective lodge. Cheap, they’re not, but these hotels offer 2 fabulous meals, spotless rooms, and impeccable service. At the end of a day’s outing, the hot sauna and Japanese soak calm one’s body, disposition, and prepare the body for the starched yukata (robe) that you wear around the lodge—even to dinner if you’re so inclined. We really appreciated the provided yukata, because it’s best to wear or carry everything you’ll need in a small daypack. I saw a couple trying to maneuver their huge Samsonite storage lockers-on-wheels along the dirt path to their lodge. Not fun.

Getting here was a snap, and any time from late April to the end of October is great as long as you avoid August. Thousands of day trippers invade this lovely place, and with so many other months to visit, why hassle the crowds. Heavy snows close Kamikochi from November to April, although our lodge’s owner said he snowshoes in the several kilometers to a small house he retains behind the lodge. From there, he skis up and down the valley in what must be a pristine alpine environment. We took the Shinkansen (“bullet train”) from Kobe and transferred at Nagoya for Takayama. These trains are so easy to access and are especially affordable due to the JR Pass program. Japan Rail offers foreigners a discounted 7-, 14-, or 21-day pass that allows users unlimited use of most trains covering Japan, including free reservations (that usually require a surcharge). These trains run precisely on schedule, and our 5-minute layover in Nagoya was easily executed with a couple minutes to spare. A word of caution here: on our return to Kobe later in the week, we got on the wrong Shinkansen, even though it was following our route. We later learned that ours would follow in 7 minutes, and we merely saw the destination, not the time or train number. This could have been expensive because we inadvertently boarded the Nozomi train (high-velocity bullet train) on which JR Pass users must pay a premium. It took us to our destination, albeit MUCH faster, and fortunately we weren’t asked for our tickets. I learned from our friends that the Osaka subway commuter line runs efficiently every 90 seconds. The platform fills with waves of people who enter (or are pushed by rail employees with handkerchiefs on their shoes) into the cars. For a moment, the platform is calm and empty, and then, predictable as a tidal flow, another zillion people arrive.

The reason we passed through Takayama is because it was a major commercial center when Kyoto was the center of the empire around the mid-1500’s. Commercialism meant tax revenue, and Takayama flourished. The merchants lived in beautiful homes crafted by expert carpenters, and block upon block of these ancient homes remain standing as affirmative arguments for quality construction.

The Takayama train station is adjacent to the bus terminal, so a quick visit to the English-speaking tourist information guides assures you that you’re in the right place and merely minutes away from the next leg of your journey to the mountains—this time by bus. The JR Pass doesn’t cover bus fares and, on the surface, the 2,000 yen (about $20) may seem a bit steep for the hour-and-a-half bus ride. We have learned that you get what you pay for when traveling in Japan; their penchant for quality and efficiency is extremely comforting, and the accompanying peace-of-mind is difficult to compromise quantitatively.

On our first morning in Kamikochi, we awakened to blue skies and a mild frost. Considering the whole area will be closed due to heavy snowfall in a little over a month, we’re extremely fortunate. In fact, I hiked in short sleeves all day, even though much of our route was canopied by deciduous trees. This place will be ablaze in gorgeous colors in a couple weeks; just don’t plan your next Thanksgiving here, ’cause it simply won’t happen. After a scrumptious Japanese breakfast (granola and oatmeal it ain’t), we headed up river for about 4 miles to campgrounds and river crossings (for those interested in heading back on the other side of the Azusagawa River). At each of these suspension bridges, there were wash rooms, tiny markets, and accommodating noodle shops where exhausted travelers noisily suck down a bowl-full and wash that down with a cold beer. Like Italians, the Japanese are never far from food, which is a good thing. We crossed over the river on the 80 meter Shinmura suspension bridge, and headed down river. 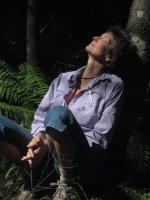 About 3 km. from Kappa Bridge (and our accommodations), we paused at the lovely shrine adjacent to Myojin Pond. While Sooney soaked in the radiating warmth of a large boulder, I noodled around taking about a million photos of rich mosses, reflections of towering peaks in crystal-clear water, and delicate waterfalls. Digital photography is SO cool; later that evening I purged all but about 20 photos that merited sharing and Sooney and I enjoyed a slide show of the day’s highlights while sipping cool sake in anticipation for dinner.

Kamikochi is one of those places you don’t want to limit yourself to one night, but all we could afford was two. We filled our second morning with a brisk hike up Dakesawa Pass that is half-way up the panorama most tourists photograph from Kappa Bridge. After about 45 minutes in the canopy of fir, cedar, and birch, we broke through onto a field of scree (small softball-sized rock) that made walking precarious, especially since we weren’t traveling with ankle-high boots. It’s not as scary as it looks but you do need to be careful. That was about all the time we had for this outing, so I photographed the moment and we headed down. En-route, we spotted a couple nestled in some boulders, patiently waiting while their cook stove heated water for “tea time.” Cute.

After collecting our stuff at the lodge, we walked to the terminal for our return to Kobe and reunion with long-time friends from our teaching days in Japan. Thanks to our JR Pass, we decided to return via another route (Kamikochi > Shinshimashima > Matsumoto > Nagoya > Kobe). Matsumoto is another place worth exploring, and we’ll just have to fit it in on a subsequent trip. (1180)