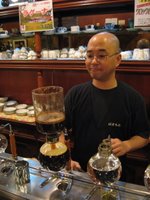 We have finally found the quintessential example of packaged food—individually-wrapped marshmallows. Or perhaps the small packet of dried fish served as munchies at the local coffee bar? Whichever, Japan is the source of innumerable surprises and we’ve not been disappointed. But why, for goodness sake, are we having such trouble purchasing a simple loaf of good bread? Ah, the anomalies of Japan.

After our gastronomical feast at the ryokan in Kamikochi, we’ve relocated to a quiet neighborhood in Kyoto where we’re sharing a house with long-time friends, Tim and Jane. A scant 2 blocks from the incredible Ryoanji temple (and its famous rock garden), this neighborhood features amenities essential to one’s basic needs: a grocery store, a sento (the public bath), and a couple of family-run restaurants specializing in bowls of noodles and grilled yummies (okonomiyaki, and yakisoba—soba noodles, cabbage, and some herbs tossed in a sweet/sour sauce). The “yaki” part of their names implies food prepared on a grill. 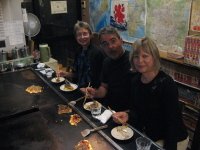 What sets these service businesses apart from their foreign counterparts is the opportunity for patrons to sit opposite the grill or coffee preparer (barrista they’re not) and monitor the creation of your order. In the case of grilled items, you may sit right at the grill and your cooked dish is slid in front of you to keep warm. You then serve yourself into tiny dishes that barely fit on the 8″ deep counter that serves as your table. In the case of okonomiyaki, the ingredients are assembled off the grill and consist of a batter, some ginger, cabbage, a little soy sauce, and an egg and, when everything is whipped together, it’s shaped into a 10″ diameter “pancake” (for loss of another descriptor) on the grill. After 7-8 minutes (or about the time to get into a beer or some delicious sake), the extras are added. These may be pork, beef, veggies, or a variety of fish: grilled octopus (taco), shrimp (ebi), or squid (ika). After adding the extras, the okonomiyaki is flipped for the final cook and a delicious sweet/sour sauce, some ginger, and fish flakes are spread on top. The whole thing is cut as you would a pizza and slid in front of you with an outpouring of thanks, “enjoy our humble offerings,” and that sort of thing. Sooney has adapted this recipe at home by adding tofu to the batter before grilling.

Noodles come in 3 shapes: ramen, which resemble spaghetti, soba noodles that are larger than spaghetti, are round, and are often made with buckwheat, and, finally, udon, white, starchy, noodles that are considerably larger than either of the others. Ramen is usually served in a broth, augmented with slices of pork, scallions and bean sprouts, and is eaten with chopsticks and drunk with loud, slurping noises. This is extremely important and is a highly revered compliment to the ramen chef.

Soba is often served cold on a bamboo tray and is dipped in an accompanying broth (either hot or cold, depending on the season). Soba (the same noodles grilled in yakisoba) can also be served in a bowl similar to udon. Udon dishes are served in a variety of ways: some with a miso broth, others with a curry sauce, and sometimes with deep-fried tempura or pork cutlets on top. All these dishes basically constitute Japanese fast food, but distance themselves from traditional franchised (read American) fast foods as they’re far more nutritious and delicious. If a café menu is preferred, you’re best to leave the neighborhood and search around train or subway stations. These noodle/broth dishes may also, by foreign standards, seem a little expensive—I’d guess the average dish to be around 800 yen, and drinks adding about 500-600 yen more. On a local scale, they’re affordable.

The upscale meals in Japan are the ones most foreigners rarely experience because the venue is a smallish place with elaborate (and indecipherable) kanji characters describing the fresh seasonal vegetables, fish, and meats available that day. Alas, there is rarely any plastic food in the window illustrating in 3-D what you’ll get. Entering those places is always risky, because the portions are small, delicious, and usually expensive. In addition to that, you rarely know what you’re going to get unless a Japanese-speaking companion is along to assist. The atmosphere is usually similar to that of the noodle joints, and patrons are great friends at the end of the meal. The only difference is the bill: often 6-7,000 yen for 2 (including drinks).

We’ve been fortunate to be traveling at a time when juicy apples and Asian pears (nashi) are plentiful. These (and some VERY expensive grapes), are tasty treats to savor before retiring.

We’ve found that for the memorable Japanese meal, it’s practical to take your meal as part of overnight accommodations at a traditional ryokan. That way you get the whole experience: beautiful tatami room, hot bath followed by freshly-starched yukata robe, and a wonderful meal to cap the evening. OK, you’re dropping a couple hundred bucks for two in this configuration, but at least you know what you’re getting: bliss.