This onsen, or Japanese bath, was one not to miss. We’d traveled an hour on local trains to reach Ibutsuki from Kagoshima, and at the train station went immediately to the information desk. Our maps and brochures efficiently communicate our objectives and the wonderful agents provide us with local bus schedules, city maps, and other helpful information. In this case, it was the Ibutsuki Sand Bath onsen, and we had a quarter hour until the city bus arrived. We noted most Japanese tourists simply jump into taxis for the short ride, and when traveling in groups of 3-4 that made sense. The bus fare is about a third of the taxi fare so, while waiting, we spied a wonderful sculpture of a family, lifesize, nude, and anatomically perfect. The sculpture was surrounded by a shallow pool of hot water, and several persons were seated on well worn wooden benches designed for soaking feet in the therapeutic bath. A tasteful introduction to a spa town; and what a view!

After arriving at the onsen, we were give a yukata, a souvenir towel, and were directed to the gender-specific changing room. After stripping and placing everything into lockers, we donned our yukata and reconnected outside on the boardwalk overlooking a placid sea and lovely sunset. There were several other bathers, and everyone was animated, partly in anticipation of the procedure intended to “comfort the heart, mind, and soul” as stated in the brochure. We followed the crowd down a ramp to the beach and were instructed to lie in a prepared trough of warm, dark sand. Sooney went first so I could photograph the event and, frankly, it was momentarily unnerving to see her laid out in that monochromatic setting. Lying with arms by her side and shrouded only in her yukata and the white towel over her hair, she was emotionally braced for the experience as the assistants began shoveling sand over her, beginning at her neck and quickly heading south. When only her face was exposed, they kept shoveling, and she opened her eyes with a slightly startled look that read, “How heavy is this going to be?” For best results, bathers are buried in about 4″ of sand that is heated from underground thermal sources. They repeatedly turn the sand as if rototilling a garden to keep the temperature at about 80° and you feel the heat immediately on your backside. We were instructed to wiggle our fingers and toes to expose them if we felt too hot, and when I was “buried” we compared our heartbeats that were surprisingly in synch. What was weird was how we both felt our our pulse in our legs!

After the recommended 10-12 minutes (to prevent burning the skin), we slowly exhumed ourselves, one extremity at a time, and lay there, blissfully relaxed, enjoying the lovely view of a calm sea while other bodiless heads basked in the course, volcanic, sand. We slowly made our way back to the spa, and spent another hour separately bathing, scrubbing, and soaking in the large bath. It took several shampooings to remove the last grains of our sand “bath” and we returned to the JR station for the hour-long ride back to our ryokan in Kagoshima. 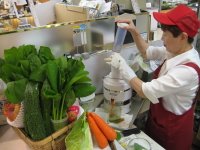 Events leading up to our bath were equally interesting, although not as unique. We’d begun the day walking around the shopping area near our ryokan in anticipation for the opening of the Yakanataya department store (hence the name, depato, in Japanese). At precisely 10 a.m., the store opened with staff bowing greetings to patrons as they filed past. We followed the crowd, and salesperson after salesperson stood formally at their counter, bowing as customers passed. Japan is clearly a consumer-based society, and it works. None of these employees appeared humiliated by their role; on the contrary, there is extreme pride in their work, from the tidiness of their uniforms and work area to their loud greeting to every person within earshot. We made our way to the basement where the food departments are commonly found, and purchased our bakery items for the day. These are not necessarily sweets (although sweets are plentiful) but rolls stuffed with healthy ingredients that make terrific snacks. Sooney spied a pile of fresh greens, vegetables, and fruits, and discovered the juice bar. Green drinks, Japanese style! As it was barely opening, her stock was fresh and we took a chance to taste her wares. Carrots, greens, pineapple, and other ingredients disappeared into her juicer, and the result was delicious. When we were nearly finished, she mischievously looked around and refilled our glass (no plastic in this operation) with what remained in her juicer cup, gushing something like, “I’m not supposed to do this, but nobody’s looking. Enjoy!” 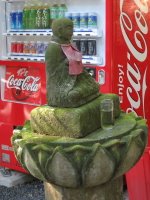 Snacks packed for our day trip, we headed to our mid-day stop at Jigenji Temple and its ancient park. Not knowing what to expect other than a badly-needed walk to offset our food intake, we found the park to be lovely, isolated, and plush with birds, those huge yellow and black garden spiders in their three layers of intricate webs, and an egret poised by the stream patiently awaiting a fishy meal. After snacking on our bakery items in the shadow of your basic 1,000-year-old stone bridge, we continued on a well-beaten path to points unknown. It proved to be a re-creation in miniature of the 88-buddha pilgrimage the pious used to travel to Shikoku to accomplish. Enthusiasts not wanting to travel that far helped a benevolent monk create this reproduction. Every 15-20′ a stone statue sat in an auspicious notch in the rock wall, canopied by maples that would soon be turning into a wild variety of autumn colors. We’d read that this park was also an perfect place to consume local somen noodles (there’s that food thread again—about as subtle as a flying mallet). 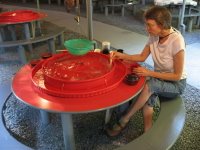 At about Buddha 47 we came to a highly unusual restaurant where we enjoyed the local specialty, but not before learning how. You dump your noodles into a 3′ in diameter and 4″ high plastic pan with cold spring water flowing from a spigot in the middle. Gravity then takes charge, and your noodles flow counter-clockwise, rinsing in the fancy water. Ever try grabbing boiling spaghetti with chopsticks? It’s tough. But grab you don’t in this operation; you merely place your ohashi (chopsticks) straight down in the water to capture a mouthful. As a pier gathers seaweed flowing with the tide, your noodles accumulate on your ohashi that you then drop into some seasoned broth on your tray. They’re then consumed, with a chaser of pickled somethings and some onogiri (rice balls wrapped in dried seaweed). This was yet another first for us, and the surprise was not having a clue what we’d find down the trail. But then that’s been the tone of this entire holiday, hasn’t it?