As we wind down our journey through Japan, it’s clear that the connections we’ve made at a local level with this intriguing country is in part attributed to us not driving. Longer distances were reduced to a scant 4 hours due to incredibly fast shinkansen trains and their slower siblings, the limited express trains (traveling a measly 120 per hour). When in urban areas, buses, streetcars, local trains, and an occasional taxi had us elbow-to-elbow with principally Japanese travelers and commuters as we navigated, maps in hand, from one side of town to the other. On more than one occurrence, bikes prevailed and, whenever we didn’t want to miss a single fragrance, nuance, or anomaly, we traveled on foot.

Considering how we Yanks are so dependent on the automobile makes Japan’s public transportation system that much more remarkable, and our dependence on it has heightened our awareness of its efficiency. More than an anomaly, however, is our revelation the Japanese accept this efficiency of their buses, trains, and taxis as the norm, which is the opposite to what we’ve learned to expect in the US. Interestingly, the nation’s business infrastructure supports this expectation; most employers reimburse their employees’ commuting expenses. Since we’ve relied on local transportation (from bikes to “bullet” trains) throughout our visit, we decided to focus the remainder of this entry on various means of getting around.

Prior to leaving the US, we purchased a couple 7-day Japan Rail passes for each of us that allowed us unlimited use of JR trains (from locals to the super-fast shinkansen trains). We used one to visit the northern alps, and the other was 3 weeks later for our trip to Kyushu. These passes are easy to use, available only to tourists, and a great value—their cost was considerably less than conventional tickets covering the same distances, and we were allowed to reserve seats at no extra charge (reservations require a “surcharge” to regular passengers). Riding shinkansen trains in Japan must compare favorably to what I’d assume to be first class on an airline. They’re remarkably on time, impeccably clean, and extremely comfortable. There is a first class called the “Green Car,” but we were neither entitled to that status with our Japan Pass nor did we feel inadequately served by the standard service. Japanese trains are broken into several types: local, limited express, shinkansen (Hikari and Kodama) and Nozumi (a super fast shinkansen, not available for Japan Pass holders, and available for a premium). We did ride the Nozumi once, entirely by accident, and lived to tell about it. 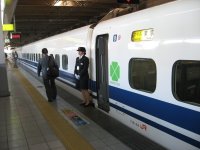 On one shinkansen trip from Nagoya to Osaka, we had a transfer to make. After calling Sumiko to let her know that we weren’t far from their home, we hung up after hearing the announcement for our destination (Osaka), and got in line on the platform marked with our car. That’s another thing about the local trains; they stop exactly at the corresponding platform marked with the train’s door. With everything seemingly under control, we boarded the train and were surprised to see two suited businessmen in our seats. Our puzzled expressions suggested, “Sorry guys, I think you’re in the wrong seats” to which they responded with an kind, “You’re on the wrong train to Osaka.” We had inadvertently jumped on a Nozumi shinkansen bound for our stop that arrived on the right platform 5 minutes before our train. So we grabbed a couple empty seats, prayed (successfully) a conductor wouldn’t notice us and demand a surcharge, and arrived in Osaka well before our scheduled train arrived. It was cool riding first class, and we didn’t make that mistake again.

Shinkansen trains are remarkable. We’ve learned that it’s actually cheaper and faster to fly domestic airlines, but you don’t get the down time so important to tourists. In Kyushu, some trains had leather seats and carpets, others shaped wooden seats and parqueted wooden floors. Unique on all long-range trains, all are equipped with fully-functioning restroom facilities; spotless flush toilets (both “western” and squat varieties), urinals for gentlemen, and separate washrooms with hot and cold-running taps. Another interesting anomaly are the “quiet’ cars, where there are no broadcasts by Japanese and English-speaking robots, just digital messages displayed on a reader-board above the door.

In addition to extraordinary trains, the service was equally memorable. A uniformed server regularly passed through the cars with a cart loaded with drinks, food, and who knows what else, and we were entertained when they bowed to passengers before entering and leaving the coach. The trains remain spotless because Japan Rail cleaning ladies, meticulously outfitted in pink pants and baby blue caps, were positioned near the door as we exited at a train’s scheduled run. They bowed to each departing passenger, and when all were out, scurried on board for a whirlwind cleanup. Passengers apparently also accepted the responsibility of keeping things tidy.

Always a novelty at the end of train travel is the “ticket sucking” machine. Your ticket is validated at the beginning of all travel, and before departure of any station, you insert your validated ticket in the machine. If the fare paid corresponds with that required at your destination, swinging gates open and out you go—without your ticket, of course, because it’s been sucked into the machine. Those with JR passes (or oversized baggage) are obliged to display their tickets to helpful station agents located at all exits. 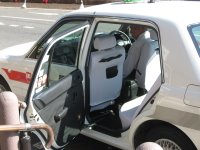 At the end of long distances, it’s often convenient to finish your travel in a taxi. Especially if you’re traveling with companions. Taxis have a flat rate for the first mile (it varies, but most were about 600 yen). Meters function as expected, and at the end of your trip, you pay only what’s displayed—tipping is not expected in Japan and, in some cases, is considered rude. It’s not unusual for drivers to wear dark suits, white shirts and ties, and white gloves that compliment the white cloth seat covers. While waiting in line for rides, drivers nap or read in air-conditioned splendor while the engine idles, and many smoke in their cabs. They therefore often reek of room deodorizers attempting to camouflage the stench, but are otherwise are impeccably clean (you wouldn’t even think of eating in one). Another thing: when entering the rear seat, dismiss any inclination to close the door because the driver controls that from the front seat. 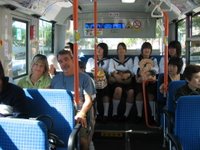 Once settled in our accommodations, we generally use buses to get around. They’re affordable and schedules are available in English. In addition to being consistently on time, the buses (like all public transportation, it seems) were always clean; floors, windows, and shiny seat covers. The seats nearest the entrance were reserved (when necessary) for the elderly, disabled, and parents with children. Payment is made when leaving the bus, either in cash (change machines are on board), or using passes. The fare is about 150-220 yen per ride and, in Kyoto, we often purchased the 500 yen all-day bus pass from the drivers. That allowed us unlimited rides and flexibility. 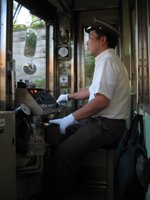 When waiting for your bus in some places in Kyoto, information is radioed ahead and provided in Japanese and English about the progress of the buses scheduled to stop at a particular location. When the bus arrives, passengers enter via the back door and, to facilitate boarding, air shocks lower the bus to approximately curb height. This not only accommodate the elderly, but those with suitcases and other bundles. We noticed that at certain hours, Kyoto buses reduced engine emissions by shutting off their engines at all scheduled stops and stop lights. In Kyushu, streetcars still run and served us well. Like the bus lines that replaced streetcars in other cities (e.g. Kyoto and Kobe), these remnants from the past (and a few brand new ones) continue to ply the major thoroughfares and met our needs as did the buses elsewhere. 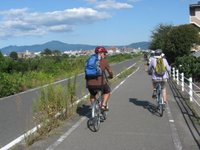 While much of Japan is mountainous, major urban areas are generally concentrated along the coast and available plains. For that reason, many cities are bike friendly and Japanese use often use them in lieu of car for errands or commuting. Automobiles can be purchased considerably less than cars in the US, partly because they’re half the size. But in order to own a car, a person must demonstrate they’ve a designated parking place for the vehicle. Bikes, therefore, are often used by commuters to travel to and from the train station or bus stop. Everyone ride bikes, age doesn’t matter—business persons in suits, monks, parents with bike seats for kids, grandmas and gramps included. One evening as we waited for our bus on a busy shopping street in Kyoto, along came a gal in her twenties, walking her bike while wearing skimpy shorts with black, lacy knee-length leggings and “pretty lady” shoes. The “click-clack” of her high spiked heels on the pavement caught my attention and demonstrated yet another example of how all fashions go with bikes in Japan. Some women go so far as to attach loose-fitting lace grip covers to protect their hands from the sun. Another clever cruiser had installed a bracket on the handlebars to hold an open umbrella above the rider’s head. 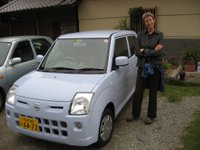 With so many cyclists, parking can become an issue, so every train station has a bike and motor scooter parking area, often covered. Larger shopping arcades also provide bike parking, many with lettered sections so you can easily find your bike among the other hundred or so. They all look identical, by the way, so this system really helps.

We experienced a little culture shock when sharing sidewalks with pedestrians, potted plants, signs, benches, and cyclists; the Japanese ride on the left side of the road, and do so also on bike paths, sidewalks, and escalators. We caused a few close calls when confronted by oncoming cyclists on sidewalks when we instinctively moved to the right, right into their right-of-way. Oops; screeching brakes, close calls, and lots of “excuse me’s” are part of the sidewalk world. It seems odd to have such bike chaos on otherwise highly organized streets with such law-abiding citizens. One thing for sure; bike bells sure help! 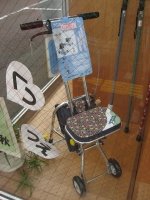 We’ve spent over 5 weeks in Japan, have walked and biked the streets, and thoroughly enjoyed Japan’s public transportation system. We’re pleased to say the stinky, diesel-emitting trucks are rare, and many occupations (e.g. gardeners) have light trucks for their work in towns because they’re far easier to navigate on the often-narrow streets. For the unstable, there are high-end “walkers” for seniors. These devices are adjustable and feature four wheels, comfy handles with brakes, 1 or 2 expandable storage pouches for their shopping and, best of all, a folding seat. We’ve seen different models starting at $150—wish we had room for one! We did not see a SUPER SIZED walker to better accommodate the increasing numbers of the SUPER SIZED humans that seem to be invading the planet.