Following a $300 dinner, our group of 7 proceeded to a night-life zone. Frankly, the wonderful dinner wouldn’t have been typical of a foreigner’s itinerary had it not been organized by long-time Japanese friends. For dessert, Japanese guides leading the way, we walked to the “Ice Bar” that most pedestrians would miss without a thought. This place, however, was “not to be missed” and, after our entire party had packed into the smallish vestibule, we learned that for $35 a head we’d be provided down parkas, gloves, and an ice bench on which to consume a shot of delicious vodka. It turned out that the entire bar was carved out of ice; bar stools, counter, foot rests, everything was solid ice. Hence the down jacket, gloves, and the shot of vodka to process everything. Alas, still reeling from the dinner check, we passed on the Ice Bar experience just in time to make room for 7 women patrons who arrived as we were departing. Donning the requisite apparel, in they went while we observed their frigid behavior through double-paned windows conveniently mounted at street level. Oregon, this was not.

Tokyo is a myriad of experiences, adventures, and delights. We were blessed to have life-long friends living and teaching on a US military base not far from Tokyo’s center and, with them as our guides, we experienced one of the planet’s largest cities through the eyes of locals. Over several days we visited the big buddha at Kamakura, meandered throug busy Tokyo neighborhoods and, probably the most foreign to us, visited a US military base. The latter was like being dropped back into mainstream USA with the exception that purchases could be in both dollars and in Japanese yen. Coffee kiosks, fast food restaurants, even Bank of America ATM machines were remarkably relocated so that any seaman 1st class would feel right at “home.” We learned that many occupants of the bases rarely delved into the adventures awaiting them in Tokyo; the base is home, thank you very much, and we’re just fine living within our fenced communities. But what a world awaited us outside the base! 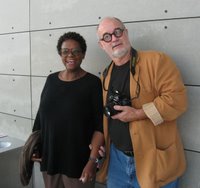 Our teacher friends live off-base in a beautiful house in the countryside. Surrounding their home are fields of seasonal vegetables, nursery growing plots and, surprisingly, a beautiful golf course. We walked the neighborhood extensively during our 4-day visit and, while discovering similarities to the tranquil lifestyle experienced in Kyoto, we missed the glorious fragrance of the Kinmokuse blossoms we’d grown to love. Automobiles also characterized the fabric of a large-city lifestyle, and we were driven to places that would have been tedious had we attempted it on public transportation.

Tokyo suburbs pale in comparison to downtowns anywhere, and once we’d relocated to the New Sanno Hotel in Shinbashi, Tokyo, we might as well have been on another planet. This hotel is operated by the US Dept. of Defense and offers first-rate accommodations to service personnel on a sliding scale; Corporals pay considerably less than Generals (as should be the case) and, since our teacher pals were ranked as navy Captains, our room rate was commiserate to what we’d expect to pay for a nice room in Portland. One couldn’t ask for a better location, and we either walked or were within walking distance to the wonderful Tokyo subway system. As it turned out, we stayed local, sightsaw beyond our wildest dreams, and laughed and laughed over timeless meals with our friends. These, alas, were our final days in Japan and, with wonderful memories stored away, we departed on a United Airlines flight woefully inferior to Singapore Airlines we flew en-route to Asia. I guess we’ll simply have to return for more adventures.