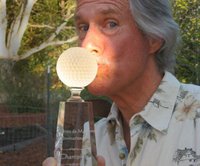 My drive had hooked left into the woods, but the golf ball was setting up nicely in the hazard, a mere 15 feet from the fairway. Between it and the flag was heavy rough, so the only shot was a chip back to the fairway of the long par 5. Clint, a member of our foursome, began the search for another player’s ball, hit considerably deeper into the woods.

“Looks like you’ve got a shot,” he added supportingly as he walked off into the trees.

Surrounding my ball were twigs, some tufts of grass, and a soft, muddy hitting surface. When playing from a hazard, a player is not permitted to remove any obstacles or ground the club, the result of which would earn him a 2-stroke penalty. With trepidation I hovered my wedge behind the ball while establishing my stance and, comfortable that I had enough room for a backswing, I powered through the ball. Alas, I didn’t get under it and, after a brief journey, the ball struck a fallen branch and settled back into the muck maybe 5 feet from where I stood.

“Shit.” I readdressed the ball and this time punched it successfully to a location where I finally had a shot to the distant green.

“I had a double,” I glumly informed no one in particular after holing out the putt for a double bogey 7. “I struggled in the rough and it took me a couple of tries to get out,” I responded to Clint’s curious expression.

This was the final round of the Cinco de Mayo Invitational golf tournament, and the other 3 players and I were in the final foursome, having begun the round as clubhouse leaders. The Cinco is an annual event where 16-20 invitees play 216 holes of golf on three consecutive days, with 4 rounds comprising a 72-hole “Net” tournament where a player’s score is determined by a gross score less the player’s established handicap. After 3 rounds, we four began the round only a few shots apart, and at this point were heading into the final 5 holes of the tournament. 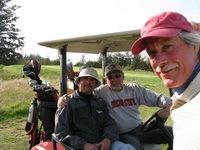 The Cinco began about 15 years ago by a couple of passionate golfers who shared a common birthday on May 5. The first several events had players golfing at more than one course per day—driving madly from course to course in an attempt to complete the second round before dark. The current format focuses on a single location, and the group is housed and fed in vacation accommodations nearby. Good, consistent play is generally considered the best formula for winning the considerable prize money, often totaling several hundred bucks and nearly enough to cover the entry fee.

The downside to winning, if there is one, is the victor’s responsibility to single-handedly organize the following year’s tournament. Bear in mind that this is every serious golfer’s fantasy tournament, and the winner is unquestionably permitted to invite whomever he wishes, call the games, distribute the winnings, so there is little whining from the winners. The pairings in the final round, modeled after professional tournaments, consist of the leaders playing together that adds more than a little excitement to the mix. Cinco wisdom is to finish in second place so you win approximately half the winner’s share of prize money without having to set up the next year’s event. Cinco reality is that second place is, well, second place.

As it turned out, the results of this year’s tournament had three of the four members of our foursome finishing in the money, with Roger and me tying for first. A tie was unprecedented and, because we had a blind-draw scramble to play that afternoon, we agreed to divide the first and second-place prize money evenly and enjoy the year as Co-Champions.

Had I opted to not count the errant shot back there in the hazard, no one would have known—I’d have won the tournament with a one-shot lead. Golf, however, is an unrivaled metaphor for life and perhaps one of the only games where players penalize themselves according to a thick book of rules. What separates golf from normal circumstances is that, while good players take tournament golf seriously, qualities that characterize a good person are a set of rules far “higher” than any compiled in a book. That system constitutes our core, who we are, and how we’re viewed by others and ourselves. So, until this time next year, I kinda like the sound of “Co-Champ.”