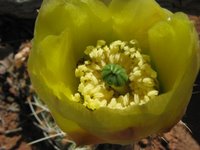 “Shhh,” the park ranger suggested, after having read a short passage from Edward Abbey’s Desert Solitaire. The intent of Arches National Park Ranger Mariah’s request that we all remain silent was for everyone to pause and consider silence as a resource. All 24 of us on the 3-hour interpretive hike obliged and quieted our day packs, coughs, and wondered what the cathedral-like room in the Fiery Furnace called “Surprise” Arch would produce. 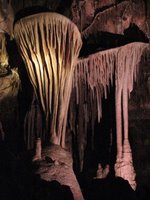 Interestingly, this was the second similar sensual activity we’d enjoyed on our journey. Several days earlier, at Great Basin National Park, we were invited to experience absolute darkness deep in the Lehman Caves when the ranger doused her flashlight and had us imagine what earlier pioneers were faced with if their single candle went out. Absolute darkness is when the eyes are unable to adjust to even the slightest light. There is no light in absolute darkness

On our second day at Arches, we started out on our bikes at about 7 a.m. and arrived at the Devil’s Garden trailhead about 15 minutes later. Given the relative distances from our campgrounds to most daytime activities, we’ve been obliged to drop our pop-top camper and drive. It was nice not have to rely on our truck-camper for transportation this morning. 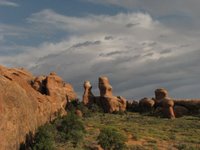 There were only a couple cars in the parking lot when we arrived, and we headed off on the 2 mile trek with the sun still hovering on the eastern horizon, casting long shadows on the sandstone slickrock all around us. Arches National Park features zillions of above-ground features while its cousin, Canyonlands National Park, a mere 35 miles away, protects hundreds of square miles of gorgeous canyons and sub-surface wonders, some with nearly 2,000’ vertical drops into the Green or Colorado Rivers. Today, however, we’re above ground, refreshed in the cool desert air, and striking off in the freshly-blown soft sand for spectacles unknown, surrounded by high, wispy cirrus clouds, dozens of varieties of wildflowers, and the occasional bunny or lizard.

After about a mile, we reached “Landscape” arch, one of the longest in the world, and a testament to the fragility of these natural wonders. In 1991, about 180 tons of excess sandstone cracked off and dropped, leaving the arch a mere 6 feet wide at its narrowest point. Remarkably, the event was filmed by a tourist and is included in the 15-minute orientation video to the park. It’s these potential catastrophes that require visitors to stay off the arches (or under some of them), walk on rock or on paths to protect the crypto-biotic coating that provides a mulch-like coolness to desert plants, and take only photographs. Throughout our journey to these remarkable deserts, “protect the crust” has been the constant mantra because of its biological dependence by plants and the decades required to repair the damage of footprints. The park’s next task is how to train the white-tailed deer.

Several arches later and still blessed by glorious weather, we reached the “Double-O” arch complex, ate a leisurely lunch, and began our return via the same route. We’ve observed that those visitors to National Parks not camping often have considerable distances to travel to trail heads. It’s not surprising, therefore, for the crowds to begin their days at 10-11 a.m., and crowds there were. We’d been in the backcountry for 2-3 hours, and as we departed, scads of visitors were just setting off. Also heading our way was a forecasted weather system that was quite forcefully, we soon learned, and the strong gusts of airborne, reddish sand made progress increasingly more difficult. Places where the trail narrowed between two “fins,” tall, narrow mounds closely resembling a shark’s dorsal fin, the winds intensified, forcing us hand onto our hats and proceed with our downcast eyes. We bore on, however, and Sooney found several Italian tourists that made the walk out far more enjoyable. By the time we reached our bikes at the parking lot, there were probably 100 vehicles parked willy-nilly with every variety of tourist imaginable. It was wonderful to have experienced this glorious country before the hordes arrived.

We made it back to our campground as the first droplets began to fall. Desert rainstorms don’t just drizzle off and on as is common to spring showers in southern Oregon. No, this system blew in with an attitude, and we spent the afternoon in our comfy camper, privately thanking our stars for having upgraded from tent-camping to a hard-shelled pop-up. The temperature dropped rapidly, the rain drenched everything, and the plants loved it. We did too.

After a couple hours, the tempest blew through and we set off to explore another hike originating from the campground. Our destination was “Broken” arch, and our approach on the loop trail was from a different direction than the route taken the previous day. Although we were walking on much of the same terrain, the effects of the recent storm radically changed the condition of the trail and the long, afternoon shadows presented us with a totally different perspective of the area. 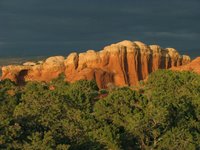 By the time we returned to the campground, the sun was quite low and illuminated nearby formations with an almost eerie light. Dark storm clouds were hovering in the eastern sky and provided a stunning backdrop for these brightly illuminated sandstone monoliths. Fortunately, our campsite backed up to a hill that provided us with a grandstand view of a fabulous sunset. The most compelling attraction wasn’t the sun setting as much as its stunning reflection off the structures all over this remarkable national park.

We’ve packed a lot into our first week on the road, and these three amazing events in a single day pretty much characterize the tone of our journey. And it’s only just begun!