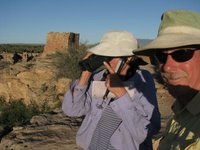 “I saw a bear on my last loop, so keep an eye out for it,” our shuttle driver announced. He smiled in a great-grandfatherly way to the 8-year-old junior ranger sitting next to him. Her job was to make sure everyone in the first tram car had their chains attached, and she took the job seriously. Just the mention of wildlife in a National Park excites visitors and most unconsciously felt for their cameras.

The shuttle was provided at the Wetherill Mesa, a more remote section of Mesa Verde National Park that wisely restricted vehicular traffic. Fortunately, the anticipated crowds at this, the most popular month, were dispersed throughout various areas of the park, making our visit enjoyable. Wetherill Mesa features the “Long House” dwelling where 150-200 inhabitants once flourished around A.D. 1200. Anthropologists are unsure why the ancient Puebloans suddenly (in anthropological years) left these dwellings, and conjecture between drought, a lack of game and fuel, or better agriculture conditions (on top of the mesa). Our ranger guide didn’t include their departure due to an attack by a colony of giant biting gnats, and I kept that theory to myself. WE were run off by those damned critters at the site of another Puebloan civilization, Hovenweep on the Utah-Colorado border, and are still nursing their nasty bites. Our “ounce of prevention” (e.g. bug spray) should have been doubled, I suppose. But they retire at sundown, and the stars in that sacred spot were absolutely remarkable, even with a waxing moon. 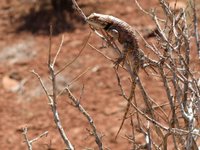 Driving with Sooney as intrepid navigator is always filled with surprises. For example, on the 17-mile dirt road through the “Valley of the Gods” (part of the “Road of the Ancients” near Bluff, UT), I held it at 15 mph due to her frequent commands to “STOP!” Along the journey, I’ve learned to oblige these apparent whims, and from her passenger seat she has correctly spotted a collared lizard sunning itself atop a woody leafless shrub, several songbirds, WAY too much broken glass alongside the road, erect prairie dogs scanning the surroundings from their hilltops (soon-to-be scooped up by predatory birds), and a car-full of Italians.

Italians seem to emanate a secret signal to Sooney’s alert sensors; driving into Natural Bridge National Monument, she pointed to several tourists posing next to the monument’s entry sign and nonchalantly informed me, “They’re Italians.” I mean, we’re driving at a moderate speed, unable to hear any language, their car was presumably a rental from LA, and the basis for her correct conclusion was the old guy’s italian style tank top. Go figure. Another siting was of a young couple, happily snap-shooting about 50+ yards away from where we had parked for a lovely lunch overlooking a deep wash with a few cottonwoods at the base of some gorgeous monoliths. During lunch, a verb (or was it merely a vocal register) floated in the breeze and, catching her attention, she set off, birding binoculars at the ready, ostensibly to view game when in fact she was stalking yet another chance to speak Italian. She happily returned, filled me in, and commented that they wondered why we weren’t afraid camping at remote sites. Whether in campgrounds or dispersed camping, our adventures have all been wonderful—except for those danged biting gnats (our first, and hopefully last, negative experience with bugs). 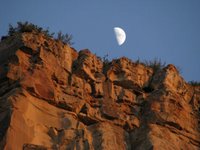 Oh, by the way, the “bear” that volunteer shuttle driver referred to was a small stump from a previous burn that sure did look like a small cub. He added, “For some reason, he’s always there whenever I return.” You could almost hear the collective sigh from the tram-full of expectant photographers.

Photos from this leg of the journey may be viewed at www.viani.us/pix/. We’re sitting in a burger joint devouring chocolate shakes just outside Capitol Reef Nat Park. We’ll be posting an amazing tale of meeting a professor from BYU while we were staying at Natural Bridges. But for now, please enjoy our pictorial compilations from Mesa Verde NP and Hovenweep National Monument. Now that was a pleasant surprise!