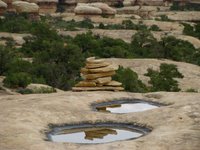 “On, on,” I imagined yelling as we proceeded from one stone cairn to another. A cairn is a pile of 4-5 rocks that defines a trail when hiking on rocky surfaces. Perhaps stretching it a bit, there are similarities between hiking along a canyon ledge in central Utah and running the hash in Indonesia. (Really stretching it.) It’s also entertaining mentioning the hash to newbies because it invariably produces a raised eyebrow in curious recollection of craziness past—but I digress. Hash House Harrier running clubs exist all over the globe in various permutations of the original based in Kuala Lumpur, Malaysia, right after the Second World War. 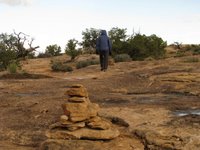 What reminded me of the hash was the cleverly laid-out “Slickrock” trail in the Needles section of Canyonlands National Park, and were it not for those cairns we would have been lost in no time. The 2.4-mile trail is not far from the park campground, and we were hustling along to both complete our hike before sunset and to keep warm (it had been rainy, cold, and windy the last few days making things a bit off). The trail is a terrifically laid-out loop, with four view points along the way to pause, click, snack, and hydrate. On this particular evening, a shot of tequila would have gone down quite nicely.

Advancing along the trail, carefully searching for the next cairn before proceeding, I reminisced running the family hash every Tuesday back in the mid-70’s when we were both teachers in Balikpapan, Indonesia. Only back then we followed trails of shredded paper, toilet paper, powdered chalk, or ground flour. It all depended on the hash club and its supporting infrastructure. Because we were associated with the oil industry, the availability of shredded geological maps and charts made it a free and readily available trail marker. How piles of shredded maps assimilated into the spare, clayish soils over the months is a good question we didn’t address.

The Hash allegedly started when British troops, stationed in the Royal Colony of Malaysia and bored out of their minds, contrived an adaptation to the traditional foxhunt and, retaining the best of colonial tradition, substituted a human for the elusive hare (i.e. fox) and everyone else at the bar for the hounds. The hare would run off into the forest and the hounds would attempt to catch the hare after handicapping themselves with a beer or two for good sport. The challenge for the hare is to get everyone back in more or less an hour.

To keep the pack together, which made for safer running—“Watch out for that root, there”—cunning hares set false trails, or checks, so the fastest runners weren’t always well ahead of the slowpokes. These diversionary paths tend to funnel runners in the wrong direction and, when they discover they’d been tricked, they’re compelled to backtrack, yelling for others to scout other possible routes. Everyone then collectively yells “checking” as they scatter and run tentatively down possible alternatives to the “real” path. When new, freshly dropped paper is found, the discoverer yells “on-on” and becomes the current the leader—until the more competitive runners regain their leader status. Strategically placing these false checks throughout the run effectively slows down the pace of the event and, if set properly, provides the hare ample time to return to the bar, savor a cold one or two while smugly ignoring the whining of the hapless runners as they trickle in.

In Balikpapan, our teaching post for 5 years, the men’s Hash was run on Monday evenings and the family Hash ran on Tuesdays. Both began punctually at 5 p.m. because on the equator, sundown is around 6. The beginning point and finish is determined by the Hare (or team of Hares), and generally consisted of a clearing not much more than 10 miles from town and capable of accommodating about 30-40 vehicles and the beer truck. Because parking was often a challenge, most harriers relied on their Indonesian drivers and car-pooled to the run. Having a designated driver was also prudent because the beer truck was just that: a pickup with a couple 55-gallon drums full of iced Bir Bintang, the half-liter size, and sodas for the Islamic runners and drivers (who usually ran the hash as well). There’s nothing quite like an iced beverage after an hour’s run in an equatorial rainforest.

The family hash evolved because the men’s hash was just that—exclusively men—although both were fundamentally alike. The men’s hash was simply more decadent, bordering on juvenile. The ribaldry that occurred at the men’s on-down often went well into the evening and consisted of singing silly songs around a campfire and “downing” pewter tankards of beer for equally-silly infractions conjured up by the raucous crowd.

A couple times a month, one of the many petroleum service companies sprang for ceremonial tee shirts and food that added to the festivities. Runners were also rewarded with anniversary shirts—both Sooney and I still have our 100-run tees. In fact, I have a 150-run shirt that, when you realize how many Mondays that is, can only be achieved by long-timers. With similar out-of-context souvenirs, it now resides deep in a drawer.

After several, I’m sorry to say, incidents attributed to my brainless participation in the on-downs, it became clear that the Tuesday family runs, with Alicia riding high on my shoulders in her Gerry-pack, was more fulfilling. I still participated in the men’s hash every Monday and, making judicious choices, toned things down a bit. The family hash actually prevailed because we all ran together, the “on-downs” were more moderate, and both Sooney and I benefited from the regular exercise. In fact, I don’t think I’ve ever been in better shape, beer excesses notwithstanding, although I countered any overindulgences with nightly games of squash that burned away licentious calories. 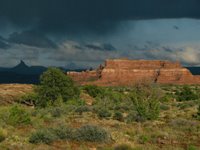 It’s been years since we left Balikpapan and, while there’s an active Hash House Harriers group running Sunday nights in Ashland, we’ve decided not to participate for one reason or the other. Now and then, certain topography or terrain loosely reminiscent of Bornean jungle paths will rekindle the memory of crafty hares setting a challenging course for the enjoyment of over a hundred other runners. Whether by setting a run or running someone else’s trek, there’s usually a way to make exercise fun and our adventures in our wonderful National Parks have been a combo of both. What’s more, we’ve found time to compile a collection of photographs illustrating this leg of our journey. Have a look at www.viani.us/pix/08canyonlands.