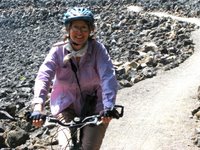 The ride from Fish Lake to Lake of the Woods parallels OR Hwy. 140 for about 7 miles, and aside from the occasional sound of passing vehicles, you wouldn’t even know it was there. Sooney was spending the afternoon visiting and singin’ with members of her choir, Women With Wings, at their annual camporee at Fish Lake. For the next several hours, the trail became my lone companion.

From the Fish Lake campground, the High Mountain Trail (#6200 on maps) proceeds east for about a mile and intersects with the Pacific Crest Trail. At that point begins an approximately 3-mile gradual but constant ascent to the summit of the trail, characterized by a brace of magnificent pines and the remnants of Brown Mountain’s most recent lava flow about 20,000 years ago.

It was to that summit that Sooney and I pedaled the following day, our ride originating at a friend’s cabin on the east shore of Lake of the Woods, and passing along a great hike ‘n’ bike trail through Sunset Bay and Aspen Point campgrounds. From there, the High Mountain Trail is accessible and we rode another 4 or so miles to the summit.

This has to be some of the finest non-technical riding in southern Oregon because the trail is rolled granite, the grade is consistent, and the views are extraordinary. Alas, the peaceful tenor of the previous day’s ride was interrupted by scary shouts from not far off the trail. They were evenly paced and continued with alarming (to me) regularity. At first I considered ignoring them, but considering my proximity to the Pacific Crest Trail I conjured up the image of an injured hiker sending out distress calls from some point near the trail—and certainly within my proximity. It became apparent that continuing my ride was no longer an option, and I backtracked to the source of the shouts. In a moment I met the culprit. It turns out some kids were geocaching about 50 yards off the High Mountain Trail and were bush-whacking their way back to their dad who was walking the path and guiding them with audible signals. When faced with my anxiety (and annoyance) for carrying on with such clueless disregard for others’ tranquility, he apologized and thanked me for my concern. One would think that participants in an activity so integrated with technology might pack walkie-talkies to keep in touch.

Images from this leg of the journey may be viewed at viani.us/pix/08_highmtntrail