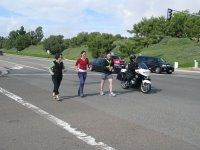 On January 2, 2009, our nephew, Greg Amundson, began a 24-hour mega-marathon run/walk/whatever, beginning from Camp Pendleton, CA. He traveled north on Pacific Coast Highway as far as Long Beach and then turned around for the trek back. His goal was to complete 100 miles in 24 (non-stop) hours, and that rascal just about did it. His final tally, after a full 24 hours, was 80.3 miles, and he only stopped because his legs simply wouldn’t perform any longer. What a guy!

My sister Julianne drove down to Carona del Mar to run a stretch with Greg and his wife, Mallee (photo) on Saturday the 3rd. By this time Greg was advancing on pure determination and the positive thoughts he feeds on. Julianne was awed and greatly appreciative of the support of law enforcement, firefighters, and similar providers who accompanied him on foot or in support vehicles the entire way.

The purpose of the event was to highlight a fund-raising event called Operation Phoenix. Their website describes Operation Phoenix as “a CrossFit initiative that will raise the necessary funds to equip the entire United States Marine Corps with functional fitness equipment to increase combat preparedness, reduce injury, and strengthen unit cohesion. This will be accomplished through non-profit sales, corporate sponsorships, and individual donations. Every penny raised will go directly to America’s Fighting Force, the USMC.”

Again, from the website of Operation Phoenix, “CrossFit is the principal strength and conditioning program for many police academies and tactical operations teams, firefighters, Marines, Navy SEALs, military special operations units, champion martial artists, and hundreds of other elite and professional athletes worldwide.”

Among several postings to the blog of CrossFit Marina – Huntington Beach, CA, was this validation of the CrossFit ethic: 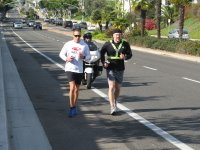 “The thing that stood out the most over the two days was his tenacity and positive outlook. Greg tried repeatedly to push himself beyond the limits his body was hitting, and he ultimately became incapable of moving on his own after 80.3 miles.”

Greg later acknowledged (source: a comment from the blog) that, while the goal was 100 miles in 24 hours, 80 miles (80%) conforms to CrossFit philosophy. Tyler (a contributor to blog) posted, “In Cross Fit we strive to preform at 80% capacity in any domain. He did that this past 24 hours.”

Watch Greg perform a CrossFit workout on YouTube. In the video, Greg rows 1 Kilometer, does 50 “thrusters” with a 45lb bar, and follows it all up with 30 pull-ups. All in less than 6 minutes!