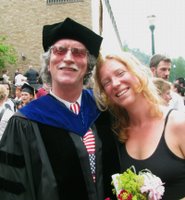 The atmosphere was joyous; many years of hard work culminated in Alicia receiving her masters in social work from Portland State—with honors, no less. A graduate degree, however, is much more than hours spent in classrooms and writing and reworking research papers.

Alicia’s degree track began shortly after receiving her bachelor’s degree from Butler University. Eager for more travel, she completed an intensive course and was certified to teach English as a foreign language and spent the better part of a year doing just that in the Czech Republic. In addition to the life-long friends she made there, an equally important discovery was the realization that teaching English, well, wasn’t as fulfilling as the relationships she had with her students. So, after returning to Oregon, she was accepted as an AmeriCorps volunteer and spent a year working with academically-challenged kids in Eugene. Their “classroom” was the forest, and the learning was bi-directional; a couple of crazies taught her how to “tree jump” (or some such name; you run full bore at an 8-10′ Douglas fir, leap for the top branches, and hang on for a wild ride to nowhere). Spending days together in the forest repairing trails, mending fences, and other thankless jobs, she listened to their stories, earned their respect by making fair but not always popular decisions and, more importantly, survived the year on double rations of empathy and a genuine love for that difficult age group. The experience, of course, was priceless and she parlayed the AmeriCorps adventure into a more extreme wilderness therapy position at Sage Walk.

The campers at Sage Walk were similar in age to the students at the Eugene Charter School, but their campus in the high desert east of La Pine, OR, was pure wilderness. Living in tepees or under the stars, these kids were often struggling with drug and alcohol dependency and generally lacked the confidence to bear the ordeal alone. Alicia and a partner worked a 2-week on/2-week off schedule, helping the kids deal with, and hopefully overcome, their addictions while living off the land. For many of these youth, it was profoundly unlike the lives they’d left; they became self-sufficient to some degree, had peer-counseling responsibilities, and quickly learned that they no longer were able to manipulate doting adults who indulged them with everything but good parenting.

One memorable story illustrates the responsible adult Alicia had become. A new camper defied the other 8 young women and 2 counselors by refusing to participate in breaking camp and trekking the 8 miles to their new site. I remember Alicia telling me that she resumed working on the small spoon she was carving from a block of madrone, and assured the wayward camper that they’d wait patiently for her to change her mind. It was something like 2 a.m. when the young woman realized they meant it. She and her fellow-campers moved camp in the moonlight, led by Burning Ember (the fitting camp name bestowed on Alicia by a thoughtful colleague).

The parent company of Sage Walk maintains a boarding academy for young women with learning disabilities in Bend, OR, and after a year of extreme, year-round camping, Alicia adapted to a new challenge by assuming the role of student-parent liaison at New Leaf Academy. The classrooms were again different but the task involved helping needy teens find their special strengths. In that task Alicia excels.

Her internships during graduate school pulled on all these experiences as she continued working with school-aged teens, both in after-school settings and as a school-to-home counselor. With her masters in social work degree completed, she’ll (finally) be salaried and work toward the completion of the final requirement for her therapist’s license: hundreds of hours of mentored field work that will eventually qualify her to see clients as part of a consolidated health network. Such an interesting journey, and fed by the synergy of her selfless passion to serve and by her clients’ gratitude, assuring Alicia that she repeatedly made the right decisions.

But all that is on hold for now. In August, Alicia will depart to Tampere, Finland, to conduct research as a Fulbright Scholar. This is one busy young woman who, in all her professional endeavors, ceaselessly finds time to recreate, socialize, and generally brighten the lives of all those lucky enough to associate with her. The theme of the commencement ceremony was “Social Justice and Hope.” Those fortunate enough to receive Alicia’s professional help benefit unequivocally from her high standards and sincere belief that there is hope that a positive outcome will be the result of her intervention.

We’re enormously proud of her accomplishments, and eagerly await to read about her future adventures on her blog from Finland < www.viani.us/av/blog >. Following graduation, we celebrated with fellow graduates for awhile, saw a live performance of LiveWire (Variety for the Ears, Vaudeville for the Mind), and then Sooney and Nick wimped out leaving Alicia and Josh to participate in the annual naked ride through Portland. Ah, youth.

Below is an article from PSU’s School of Social Work Spring Newsletter.

After graduating this year with her masters in social work, Alicia Viani will be traveling to Finland as a Fulbright scholar. She will be living in Tampere, Finland, and has enrolled in the University of Tampere’s International School of Social Sciences as a post graduate student where she will study Finnish and take one social work class per term. The rest of her time will be divided between Tampere and Helsinki with The Family Federation of Finland with whom she will be conducting a phenomenological research project that includes interviewing young women to collect narratives and reflections of their sexuality, especially regarding how their sexual identity has developed and been constructed internally and externally.

In addition to her studies and research, she looks forward to spending time drinking coffee with Finns (she hears they consume more coffee there than anywhere else in the world) and “sitting in saunas as often as possible.” Viani decided to apply for a Fulbright based upon her research focus while in the SSW’s M.S.W. Program. She knew that many of the socially progressive Northern European countries had concepts of sexual health that highlighted the psychological and included the cultivation of mental health in their holistic perspective of sexual health. “Professor Kevin Corcoran [illustrated with Alicia above] was the reason I decided to apply to Finland because he was very knowledgeable about how Finland proactively tries to construct health,” said Viani. “He has been ceaselessly available to provide contacts and offer guidance regarding the Fulbright process and beyond.” She also received guidance and support from Assistant Professor Ben Anderson-Nathe, Assistant Adjunct Professor Steve Berman, Field Instructor Kenan Ginsberg, and recently returned Fulbright scholar and Associate Professor Jim Nash.

“I would encourage other potential Fulbright scholars to not hesitate to apply!” said Viani. “It’s a lot of work, but the opportunity to study up on and clarify what it is that you’re passionate about is immensely useful. Also, it’s pretty incredible how the Fulbright committee encourages you through the extensive application process to make professional and personal connections.”