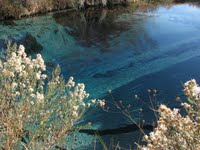 Perched on a spiny limb of one of many Mesquite trees characterizing this section of California’s Mojave desert, the black Phainopepla (silky-flycatcher family) greeted us with musical chatter and more than a little curiosity. After all, we were the first visitors this year to the Point of Rock springs at the Ash Meadows National Wildlife Refuge. Sooney spotted the place on the map and an interpretive ranger in Death Valley highly recommended a visit. This refuge is the home of the ever-popular Ash Meadows Amargosa Pupfish that serves as the poster child of the 25 endemic (found here and no where else) species living in and around the 87° water flowing in and out of turquoise ponds throughout the refuge. We were bummed because human soaking wasn’t permitted in this gorgeous setting; steaming crystal-clear water babbling along from one pool to the next. Sadly, I didn’t spot any big-horned sheep in the nearby hills, but I’m sure they spotted us. Maybe next time. 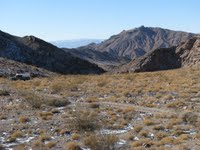 The best time to leave Death Valley heading east is around 2:30 p.m. At least, that’s when we drove out of the park and the scenery was dazzling. We’d spent the day exploring Echo Canyon, not far from the Furnace Creek Campground where we’d camped for 3 days. The 10-mile 4-wheel road through the canyon and eventually to the ruins of the Inyo Mine is pretty intimidating to most day trippers, and coupled with a destination at 4000′ on a cold December day, we pretty much had the place to ourselves. Once through the narrow canyon, the upper meadows greeted us with sunlight that warmed both us and our photographs. We can only imagine how lovely the region will be when the wildflowers awaken in the spring. 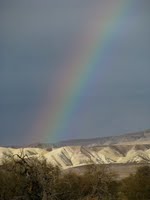 Our departure from Death Valley was motivated by yet another cold front bearing down from the northwest. We were fortunately prepared for chilly weather during our 3-day layover at Furnace Creek that included mild rains, a couple evenings around a toasty campfire with Bob and Barbara, and a gloriously full rainbow. Everything seemed to stop as we gazed at laser-like sunbeams illuminating distant hills framed by the rainbow. “Very unusual,” an interpretive ranger shared, “what a treat.”

Another treat was our accidental encounter with Sam, a retired trucker from Colorado, who serves as Marshall at the lowest golf course in the world. We’d been bicycling around the Furnace Creek Resort and ran into Sam just outside the snack bar. Beside confiding that they served the best burgers in the valley, Sam still couldn’t believe they actually paid him to do something he’d gladly pay THEM to do.

He shared a couple anecdotes about the ubiquitous coyotes that roam fearlessly throughout the park. Alas, they don’t adapt well to human lifestyles, including hot dogs tossed by ignorant guests. “One poor critter starved to death right outside the course restaurant waiting for his next dog. Right there,” Sam pointed. “Too bad he didn’t stick to eating the dates allowed to fall from the ancient trees on the property.

He went on to tell us about the coyote that seduced the manager’s wife’s real dog into a game of chase. The dog bolted after the coyote, his leash dragging behind since he’s yanked it from her hand. The wily coyote, who could easily outrun the doberman, occasionally slowed to let the dog catch up before taking off again. The dog was beside himself, and Sam knew the coyote was leading the poor sap into an ambush where he wouldn’t stand a chance against a pack of hungry coyotes. Sam saved the day (and maybe his career) by jumping into a golf cart and chased after the doberman who was chasing after that crafty coyote. Like in old western movies, Sam maneuvered the golf cart alongside the dog and slammed on the brakes with the dog’s leash caught beneath the wheels of the cart. He saved that dog’s life and, I kid you not, the manager’s wife walked by just then to confirm the story.

His own dog struggled as well, and during a lengthy illness Sam fed him steak and lobster figuring the dog was going to die. The rascal survived to the tune of $9000 in vet’s bills and refuses to eat anything now but steak and lobster. I’d like to bring my clubs on my next visit to Death Valley, and 78-year-old Sam said he’d spot me a couple strokes when we played. I think a bigger handicap will be concentrating on my next shot as we stroll together down the fairway.

Heading out of Death Valley, our next stop was Pahrump (that’s PAW-room), NV, not far across the California/Nevada state line and highly recommended for cheaper gas (over $4/gal in Furnace Creek). Along the way, we stopped for pie and coffee at the Amargosa Opera House and Café located at the appropriately-named Death Valley Junction (population 15). Owned for several decades by Marta Becket, a dancer and performer who’d begun her extensive career in the 20’s, the opera house was her final stage and she made a gallant effort to provide locals with highlights from her extensive career. The only problem was the modest population of Amargosa. So, in order to “fill the house” for her late-in-life productions, her husband painted hundreds of patrons on the walls; kings, queens, Shakespeare, and numerous other dignitaries. Really sweet. The luncheon staff at her café was really excited because Marta Becket was returning the next day. She’d broken a hip and was planning to convalesce in the adjoining Amargosa Hotel, another of her several enterprises in this tiny crossroads.

Plumped on pie, we pulled into Pahrump, and dutifully followed directions to the Casino West we’d learned from the café’s cook. Good idea, because it was slightly out of town, offered affordable and clean accommodations, and featured a beautifully landscaped interior courtyard with parking outside so vehicular exhaust wasn’t sucked in by the window heaters. The casino was characteristically smoky but we were starved and asked to be seated as far from the gaming tables as possible. The hostess looked around the packed restaurant, and seated us just inside the doorway and assured us, with a straight face, that “Smoke doesn’t go around corners.”

Whew! We dodged a bullet there, and are now safely settled in Pahrump.

View more of our photos of the 09_winterfling tour.