“Please identify yourself, and let us know if you’re a lifer,” the park volunteer kindly requested after we’d gathered for an early-morning birding walk. The only “lifers” I was familiar with were bad guys serving life-long terms in prison for crimes we don’t even want to know about. In birding circles, a lifer is one who lists all birds spotted throughout a lifetime, and there were some in this group who’d exceeded 700 different species. We’re clearly among experts, that is certain, and Sooney is in heaven. I’m sitting next to a gently-flowing stream that evidently rages during summer monsoon rains. All around me are tired willows dropping remnants of their summer foliage on piles of high-water debris; the call of some unidentified bird and a lonely cricket’s chirp blend nicely with the rustle of yet another dry leaf joining its fellows carpeting the silty bank.

Sooney and I weren’t sure what to expect when we’d left the wonderful Kartchner Caverns State Park, not far from Tucson, and drove the hour and a half to Patagonia Lake State Park. As we neared the Mexican border (Nogales is 20 miles farther south), the presence of Border Patrol vehicles became regularly visible. Any fear of meeting drug smugglers wandering along the same hiking trails as we are was alleviated by the friendly park ranger who’d been here for 8 years. “They don’t frequent this canyon,” he assured us. “There is, however, a fair amount of traffic over that ridge (where we’d just driven over) and now is when they’re actively trying to market their goods in time for Christmas.” Great. We’re in a safe zone out of Christmas shopping traffic and, like the other wonderful Arizona State parks we’ve visited on this journey, Patagonia Lake was not going to be the exception.

Most Arizona state parks offer electric hook-ups that eliminate the likelihood of annoying generators and permit small-timers like us to charge our laptop daily for the evening slide show. The atmosphere in these parks off-season closely resembles the demeanor of birders just about anywhere; guests are soft-spoken and respectful of others. The bathrooms are clean and feature hot showers that those of us in economy campers prefer over the sponge baths with water heated on our stove. What surprised us is that we’ve remained here 4 nights, and plan or returning again with our inflatable kayak. 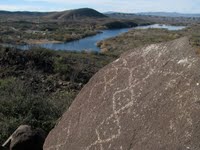 We began our final day meeting up with park volunteer Kimberly for a special hike to some nearby petroglyphs that are kept secret and only accessible with a park representative. She’s scheduled to lead a select group in a few weeks and invited us to tag along on her preliminary trek. Just meeting Kimberly and her husband, Rick, wouldn’t have happened had we not opted to layover for more than the typical 1-2 days. Good things happen. Our path covered much of the optimum winter birding habitat that popularizes Patagonia Lake and we meandered through a blend of mesquite, cottonwoods, and willows that bordered the slow-flowing Patagonia River. Once out of the river drainage and the obnoxious presence of range cattle, the environment changed back into the interesting blend of Mojave and Sonoran deserts that attracts many types of migratory birds. It didn’t hurt that once in the sunlight we switched vests, wooly caps, and gloves for sunglasses and visored caps. The scramble up to the petroglyphs was easy, and will be particularly beautiful in late march when the Ocotillo cacti bloom. There are thousands of these spiny plants in this lovely area, and with a little imagination one could easily be swimming along a sea bottom with botanical permutations of Ocotillo swaying to currents as they must have millions of years earlier as water plants. We surfaced near a pile of stark rock boulders, and were surprised by the quality and quantity of the petroglyphs, creations of ancient pueblans hundreds—perhaps thousands—of years earlier. They contrasted well with the morning light, and as we gazed from our lofty perch onto the man-made Patagonia Lake below, I wondered what the artists were thinking as they gazed upon a vastly different panorama. We observed clusters of birders, a peaceful campground with low-key winter campers and kayakers, and a few bass boats working the shoreline. All this apparently changes with the arrival of heat—speedboats and all the other toys. I later learned that some enthusiast hid a geo-cache target in these very rocks; the park ranger fortunately succeeded in having the website removed from the global network and hopefully preserved the sacredness of the site for others to enjoy as we did—privately and respectfully. Well, sorta.

My cell phone went off. The odd part was even having cell service; our only previous hot-spot was 4 trashcans from the visitor’s center about a 1/4 mile from our campsite. So, here we were, on top of an archeological site of some significance, and my damn cell is rumbling in my pocket. The caller was Ted, a social security interviewer who thoughtfully assisted me through a few questions he had with my application for benefits submitted online a couple days earlier. When we completed our business, I mentioned to Ted why we’d had limited cell service in previous attempts to connect. Interestingly, the combination of privacy, sacredness, and panorama, (not to mention a stellar cell signal), was like nature’s version of an office cubicle for finalizing retirement plans I’d begun at age 14. “After all, isn’t that what retirement’s all about,” Ted quipped after I told him where we were.

On the way down, we caught a glimpse of the reclusive Coatimundi (White-nosed Coati), an interesting mammal in the raccoon family (capable of climbing trees and rooting for edibles along waterways) that resembles a dog (he had the most Gooper-like face of any wild animal we’d seen). With his 2-foot-long tail proudly held vertically, the friendly critter strolled away into the river litter. 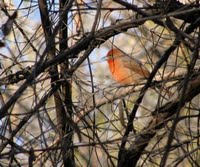 Kimberly departed for a meeting of other volunteers, and Sooney and I descended back into the stream-fed valley to look for birds. There are several species that winter here that are particularly coveted by birders. We happened to spot one (a rosy-colored Hepatic Tanager), and I took a random photograph of it through some brambles. It’s considerably easier to capture images of stationary objects, and my little Canon is outmatched when compared to cameras designed for action photography. Nevertheless, with its 10x optical lens, I’ve snagged quite a few images of birds that Sooney uses for identification questions with those more experienced (easily identified with expensive double-barreled Nikons and Leicas attached to shoulder harnesses where cameras used to be in travels past). We encountered a group walking up the path and Sooney explained her puzzling discovery. “It wasn’t a cardinal or a vermillion flycatcher and had a thicker, dark bill.” Everyone became really excited because that had yet to spot the wonderful Tanager and we saw it in its most northern range (it migrates as far south as central South America). What an unusual find! Another localized bird that attracts international visitors to just this spot is the Elegant Trogan that we dreamed of spotting. Many did while we were hiking in the hills; we didn’t and will simply have to try another time. On our final morning, Sooney participated in the annual Audubon Christmas bird count at Patagonia Lake. Led by park ornithologist and accompanied by 5 other hardy participants, they spent the better part of an hour and a half circling the entire lake identifying and counting every species of bird seen. Later in the day, her sister Carol in Philadelphia mentioned they were conducting the survey there too—in 3 feet of snow.

There must be an ethic adhered to by birders when listing a lifetime collection of sightings; I thought golf was a perfect metaphor for life because you penalize yourself for the slightest of infractions. Well, after one has correctly identified over 700 species of birds, it would make little sense to lie about the one that got away or was in the vicinity but not in your binoculars. Maybe that’s what’s proving to be so enjoyable being around folks like this. They require very little equipment and do most their recreating on foot—very, very slowly, either alone or with others. “Look, I think there’s a Yellow-rumped Warbler over there on that willow branch at about 3 o’clock,” and all lens simultaneously trained on the bird as would an array of parabolic telescopes lock onto a distant star or galaxy. “Yep, another Butter Butt,” someone confirmed and pencils dutifully added the sighting to a list—of the day, of the vacation, or of a life. Only a birder really cares.