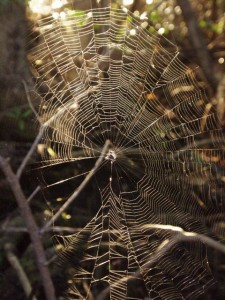 What started out and ended as a peaceful canoe ride was punctuated by a most remarkable event. The canoe with Jim and Chris was 20-30 yards away from the 5 other canoes hanging out in calm water near the mangroves. They were in somewhat deeper water when the sea suddenly began churning and boiling up directly beneath their canoe, nearly capsizing them.

Sooney and I had a clear view of the scene, and the diameter of the upheaval easily exceeded the length of their boat. As suddenly as it occurred, the now-muddy waters calmed and everyone looked to the our volunteer leader for an explanation. His lame excuse was that the same thing occurred a couple times previously and the resident marine ranger speculates it may have been bull sharks or large rays (both of which are bottom lovers) that were surprised and bolted.

After we returned to the visitor center, we cornered a couple rangers who corroborated the story and went so far as to speculate it might have been manatees. Very curious, indeed, as the only manatees we’d seen have been particularly slow moving, and come up regularly for air. This incident was far from gentle and, I suppose, we’ll never really know what happened. I’ve got to admit, however, that it did remind me of the mystery of the Loch Ness monster, but I digress.