Mare’s eggs (nostoc pruniforme) are a species of blue-green algae (cyanobacterium) that grow all over the world. Locally, they’re found near the headwaters of Spring Creek, located off Hwy. 97 in Klamath County that flows into the Williamson River at Collier State Park.

As we floated in the chilly, crystal-clear water, thousands of baseball-sized spheres of spongy bacteria contrasted with splotches of bright turquoise where the sandy bottom had not yet been populated by the algae. Further up the stream, that sandy bottom was peppered with small geysers of fresh water, bubbling silently in the shallows. Our kayak drafts at about 6″ and maneuvering around sunken logs, rocks, and small islets to the headwaters was a real challenge—and a perfect opportunity to observe some of Nature’s best. Along the shore, additional streams daylight from mysterious depths, their gentle gurgle not unlike that designed into traditional Japanese gardens. I speculate it’s all connected somehow to an underwater breach of Crater Lake, lying in the caldera of once massive Mt. Mazama, located a mere 20 miles to the north. But that’s just me. 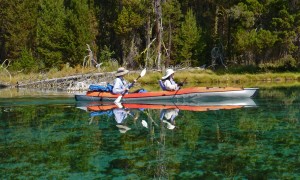 Spring “creek” is hardly a creek, however. Sure, its water eventually  flows into the Williamson River and further points south but I’d characterize it more as a small lake. There’s barely a current and it’s well over a couple hundred yards across in spots. One thing for sure, launching your boat from the day-use area at the headwaters is far nicer than putting in behind the Collier Logging Museum picnic area. The lower stretches of water are lined by residences and doesn’t come close to the pristine water higher up in the forest. Getting to the Spring Creek Day Use area requires driving north up Hwy. 97 about 4 miles past the Collier Logging Museum State Park. Just after a swing in the road with steep bluffs on the left side, there’s an unmarked gravel road heading west that runs along the top of the bluff to the Oux-kanee Skyline Viewpoint. Continue on a few more miles and you arrive at an abandoned campground and, shortly after, the parking area for the headwaters. We found that putting in here and kayaking down a mile or so before returning was far more exhilarating.

We had to clean out the wild flower gardens on the logs so children would not try to gather them and fall in the cold water. They were beautiful and the Indians used them as blinds from which to spear the big trout.
– photo caption by an unknown writer (from Collier Logging Museum website)

A good friend wrote a paper on the history of Spring Creek and informed me that the entire area was heavily logged around 1917. Camps were maintained on the shoreline and logs were floated out. Mosquitos were controlled by pouring kerosene along the shore, and who knows what else they introduced into the water. Years later, a creek restoration project was initiated, and fallen timber (serving as nursery trees and wonderful habitat for insects) were thought to be detrimental and summerly removed. To this day, the wonderful red-side trout spawn up stream but scientists are puzzled why their fry don’t remain.