The male Harrier hawk flew directly in front of our van and circled the marsh grasses a hundred yards away. In his talons was a small dead animal. He seemed to restrict his flight to a certain area adjacent to the gravel road on which we were parked, and our guide, Duncan Evered, prepared us for an extraordinary event.

Duncan has lived at the Malheur Wildlife Refuge Field Station for 17 years and currently serves as Station Co-director, head ornithologist, and part time rockologist. He explained that there was most likely a female Harrier (also referred to as a Marsh Hawk) sitting on a nest nearby and he hoped that, with any luck, we’d witness a remarkable feeding behavior. Indeed, a moment later, the female appeared out of nowhere and began flying synchronously with the male, about 5 feet below him. As Duncan predicted and with the precision of a trapeze move, the male dropped the meal while the female flipped, talons up, and grabbed the morsel mid-air. She glided low over the reeds and returned to the nest. The pass having been made, the male flew off for another tasty bit. I may have overstated the significance of this maneuver as it’s what these birds do; what was memorable is Duncan’s commentary and our having witnessed the event.

He also shared his considerable familiarity with the Great American Black Rail, probably the most common waterbird seen in the the refuge (hence its name, the Common Coot). They’re strong swimmers due to a web-like membrane between their long, lobed toes that can be employed on demand. When out of the water, the membrane folds back allowing them to walk, run, and even climb.

There’s a dark side to this ubiquitous resident of the refuge, however, and they can be aggressively territorial during breeding season. So much so that they’ll fight a foe to death, often with the assistance of other coots solicited to help corner its victim. If that’s not enough, they practice infanticide and will attack their own chicks when they beg for food. These attacks concentrate on weaker members of the hatchlings and ornithologists have observed them killing annoying offspring with a well-placed peck on the head. This is one bad-ass bird.

Our visit to Malheur began with our rendezvousing with the Reeves at Page Springs campground located on the Dunder Und Blitzen river, 3 miles from Frenchglen, OR. The story goes that an early military party was on a mission to eradicate native American Indians from the area. The weather was stormy and the spring runoff from nearby Steens Mountain was swift. They successfully forded the river and camped at what is now the state park. The commander, impressed by the thunder and lightning, applied his knowledge of German and named the river accordingly. The river was renamed by early settlers to Donner and Blitzen, as it appears on maps, although it’s simply called the “Blitzen” by locals. It provides irrigation for a hundred miles or so north to ranches and the massive Malheur refuge, and accompanied us on our mile-long walks south of the campground.

We had our bikes with us, and cycled the short distance from Page Springs to the “P” Ranch looking for the elusive Bobolink. No luck there, but during the 7 days in the area, Sooney identified over 90 birds, including an extremely unusual sighting of a Virginia Rail, 8 fluffy babies in tow. 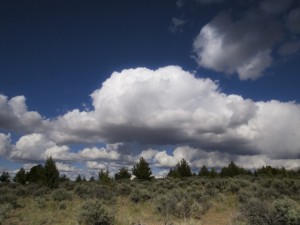 There’s a nature trail that leads up to the bluffs overlooking the campground and meanders through the lava fields along a dry creek bed to the fishermen’s parking lot. Weather in May is unpredictable, and I was treated to the extremes: sunny heat to blustery hail, all within minutes of each other. Characteristic of spring weather, the occasional squalls would blow through, interrupting a photo shoot with a pleasant respite beneath gnarly junipers. On the big screen were the magnificent cloud formations that painted the landscape with their unpredictable shadows. Big country, spring weather, and plenty of surprises.