I was first photographed with Lorraine in 1949 when I was the ring bearer in her wedding. I gave her the photo; it took her a minute to snag the faded ring pillow I carried, handily stored among her of displayed memorabilia. I was about 4 years old then and don’t recall subsequent visits until we got in touch last week. We had 64 years to catch up on and made the most of it. Sooney and I were in Southern California celebrating my 50th HS reunion event in La Cañada, and we were invited to lunch at her beautiful home in Pacific Palisades.

Since I’m the only remaining stateside Viani with ties to the Italian village of Villa Viani, the opportunity to reconnect with Lorraine was particularly important because she’s the last surviving link to my parents. As all descendants know, there are never enough questions we wished we’d asked parents and family about the family’s history. Alas, the stories cached in my memory consist of disconnected events, names, and locations. Couple that with hundreds of feet of inherited silent movies that complicate things even more by visually portraying events without an accompanying provenance. Perhaps I was remiss for not taking my parents to task and insisting on substantive details about these family sagas. Or, most likely, my recollections are merely versions of my parents story. And now we have Lorraine’s vignettes, including her recollection of my grandmother’s fabulous Chicken Paprikas. 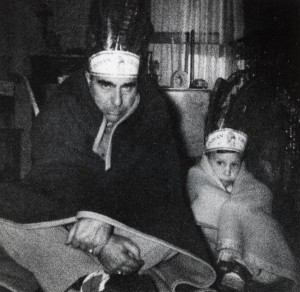 Her father, Angelo Pipilo, was my Godfather and a USC graduate in Pharmacology. A long-time friend of the Viani clan, Angelo was the owner of two businesses. The Alpine Drug store was on No. Broadway in Los Angeles, and was across the street from Little Joe’s restaurant. His other business was the Physician’s Prescription Pharmacy on Union street. It was later relocated to 5th and Olive street, caddy-corner from the Biltmore Hotel and across the street from Pershing Square. He was a very successful pharmacist and experimented in his lab at home at 2825 7th Ave. that led to his inventing the first calcium pill. He later sold the patent to Squib Pharmaceuticals. Lorraine recalled the terrible smell of “rotten” eggs that repulsed her—she wasn’t able to eat eggs for many years. He was also involved in the local Italian-American community and became dear friends with my parents. His secretary was UCLA grad Olga Metrovitsch (my mother’s sister) and she was in her late 20’s when the drama began. According to Lorraine, it was no secret that Olga adored Angelo (…and yet he remained faithful to his wife and family.) 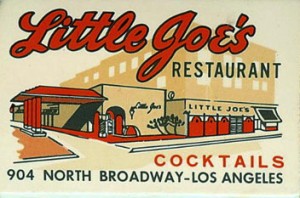 Physician’s Prescription Pharmacy was in the Philharmonic Auditorium on 5th & Olive, the home of the Los Angeles Civic Light Opera. As a child, Lorraine used to climb upstairs where she had access to matinee performances. This is the same Philharmonic where my sister, Julie, and I were introduced to light opera; Mary Martin & John Raitt (Bonnie’s dad) in “Annie Get Your Gun” (1957) and so many more. Not far away was “Little Joe’s Cafe” (904 No. Broadway), an Italian themed hangout of celebrities and local sports teams.

Angelo’s cousin bootlegged whiskey and stored it at his home. The mob raided the place and poisoned his dog who unsuccessfully protected the hooch. Angelo got the upper hand, however. He carried Cuban cigars in his store for the wealthy Chicago Mafia who wintered in LA. His then 2-year-old daughter, Lorraine, was playing with the cigars on the floor and had an “accident.” She recalled Angelo saying, “Hoocha (his nickname for her), what have you done?” He collected the soaked cigars, dried them in the sun, and replaced them for sale. Lorraine chuckled at the memory of mobsters, who ostensibly loved children, smoking cigars flavored with her personal essence.

When Angelo’s wife, Lillian, suddenly died of complications associated with appendicitis in October, 1943, Lorraine was 16. The tragedy of her death drained both husband and daughter, and her memory made it uncomfortable for them to remain in the house. They moved into the home of a relative living in Arcadia. Lorraine attended Arcadia HS for the year. They returned to the house on 7th, accompanied by long-time friend Ralph Sarlo’s beautiful daughter, Elvira Sarlo who, although only in her late teens, helped them with the transition back into their home without a wife and mother. It was about this time that the home movie made by the Vianis showed Olga (in her early 30’s), Lorraine (about 17), and Angelo joining Joe, Natalie and Bob & Alice Krock together at Big Pines County Park most likely winter, 1944.

Olga continued to work for Angelo and he depended greatly on her during this time. She had a history of respiratory problems, and as a teen spent some time in a sanitarium. The combination of her weak health and because she was in love with a widower who promised he wouldn’t marry until after his daughter’s wedding may well have led to her having some kind of a breakdown. She desperately needed to convalesce, but where? At that time (to the best of my knowledge), her sister, Natalie Viani was living in Wyvernwood Garden Apartments in what is now Boyle Heights, LA, and had 2 infant children (or a two-year-old with one on the way). Olga was 31, and we speculate that moving in with her mother and father was not an option because, according to Lorraine, Olga detested her father, Rista. Angelo invited her to live with them and work out of the house. Lorraine reluctantly agreed over the objection of her relatives, and Olga move in (c. 1945).

The women’s relationship worsened to a point where they took meals together but didn’t speak to each other. Lorraine admits that Olga made sincere efforts to be accepted but Lorraine didn’t want any part of it. She wanted her mom back, was finishing her schooling at Dorsey HS, and was responsible for all the cooking. Angelo gave her $20/week for food and expenses, and on that she made pasta fagioli that would serve 3 for a week and happily pocketed $5/week for herself.

The tension between Olga and Lorraine led to Angelo having a minor stroke (or some kind of breakdown) that forced Lorraine to have a change of attitude. She was unwilling to become a cripple to resentment and both she and Olga wanted Angelo to be happy. So the two women agreed to a reconciliation.
Note: I don’t know how long Olga continued to live in the household but, around 1949 (the year Lorraine & Micky married), Joe and Natalie Viani were renting a house on Kirkby Road in Glendale. There is a possibility that Olga lived with them for a time. 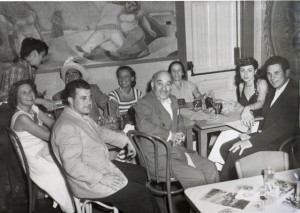 Shortly after graduating from Dorsey high school, Lorraine and Micky began dating. He was a Navy Vet and used his GI bill to attend USC. After graduating ’49, his brother convinced him to join him in the construction business. That proved to be wise and he was very successful. While the two were dating, there was an event in Palm Springs at the Doll House, a famous club in downtown Palm Springs that was the setting of a photo I found in the Viani archives. In addition to Lorraine and Micky, others Identified in the photo are Angelo, Olga, Natalie, Joe, and Ralph Sarlo and his wife, Josephine. It was their daughter, Elvira Sarlo, who lived with Angelo and Lorraine after they returned to the house on 7th street.

Micky and Lorraine married in 1949. Olga even helped Lorraine choose a wedding dress and wouldn’t allow her to consider anything less than a designer gown. After Lorraine and Micky departed to the Beverly Hills Hotel for their honeymoon, a family friend who was a guest at the wedding married Angelo and Olga at his daughter’s reception. Lorraine added that she “did” Olga’s hair for the wedding; little did she know that it was Olga’s wedding day as well. The next morning, Lorraine called home and Olga answered. She nervously passed the phone to her father who broke the news.

Always the entertainer, Angelo played Santa Claus annually to everyone’s delight, and in the spring he was often photographed wearing his Easter bonnet. One of the digitized film clips captures him in Palm Springs where Joe managed the local bowling alley.

Later, Angelo and Olga built a beautiful house at 1224 Journey’s End Dr. in La Cañada. The Viani family lived there while building their house on nearby Lasheart Dr. Angelo was an avid hunter, and had a Springer Spaniel named Freckles, who was bred with a thoroughbred spaniel. In the litter was the Viani’s puppy, Happy.

On Lorraine’s 23rd birthday, June 26, 1952, she and Micky were invited by Angelo & Olga to celebrate over dinner. Shortly before departing, Angelo called to say that he wasn’t feeling well and that Lorraine should dine without him. The next morning, Olga called Lorraine and said, “Go to the hospital because your father is dying.” Lorraine was stunned both at the news and the manner in which it was delivered. When she arrived, Angelo was in a coma attributed to a ruptured intestine. Some family members speculated that he had been poisoned. An autopsy was never performed. Lorraine asked where the physician, a personal friend, was and learned he was in the chapel praying! Angelo died the next day, June 28, 1952.

After a short while, Alpine Pharmacy was sold and the Physicians Prescription Pharmacy was taken over by a personal friend, James A. Bennett (who, as a pharmacist) may have worked for Angelo. Natalie worked for Jim for a time when Julie and Nick were in elementary school.

Lorraine and her husband of 62 years, Micky, were very successful in the construction business. They owned 5 boats (one a 51′ sailer) and participated in the “Trans-Pac” to Hawaii 3 times. She’s the former president (and is currently active) in the SoCal chapter of the Assistance League, is active in the Yacht club auxiliary, and continues to guide school programs at the Getty. We aspire to have her health, disposition, and sense of philanthropy when we’re 86!