Balikpapan is a port town located on the southeast coast of Indonesian Borneo (Kalimantan Timur). In 1977, Sooney and I accepted a teaching position at the Pasir Ridge K-8 school, part of the Union Oil of California production facility built a few years earlier on a hill overlooking the bay. The campus was named Pasir Ridge (incorporating the Indonesian word for sand, pasir) and the school was built and contracted out to ISS (International School Service) to encourage expatriate manager-level employees to live abroad with their children in an extremely remote location.  The school had roughly 100 students and a teaching staff of 10, and with a teaching ratio of 10:1 we think back on how sweet it was.

Our lives were consumed with our jobs and recreation—running, squash, swimming, bowling, softball leagues, even petanque (the French version of bocce). Our meals were prepared by an experienced Indonesian woman, and our apartment was maintained by live-in maids. Bromeliads and orchids decorated our apartment’s balconies and we’d wind down after a busy day sipping iced beer in our locally-crafted rattan furniture and watch tankers navigate the narrow straits of Balikpapan. Even better, a not-infrequent thundershower would amble past, the evening’s equatorial colors shimmering off torrential rains.

Yea, life was good and we stayed there for five years, growing professionally and as a family. Alicia was born in April of our fourth year, and we remained one additional year with the help of a pembantu who carried our infant on her hip in a batik selendang (a form of baby sling). During school recess, Sooney would walk the couple hundred yards home, nurse Alicia, and return to her classroom with time to spare. By and large, our decision to leave Los Angeles was wise, we made life-long international friends, and we look back on those five years with satisfaction.

The Indonesian oil conglomerate, Pertamina Indonesia, prohibited women from holding positions in the oil industry, so most expat wives had a lot of time on their hands. A few exceptions come to mind, however, because one American couple, both geologists, worked out of their home. This was rare, and we were exempt from that archaic mandate because Indonesian women (as well as men) were often teachers and that was the basis on which this particular policy was based. As many of the expatriate wives were educated, we encouraged them to participate in school activities and we became socially involved with many. Their substantial incomes went a long way in Indonesian culture, and collecting local artifacts became a popular hobby; vendors went from door-to-door, plying antiquities from carts with makeshift bicycle wheels and a compelling sing-song call. Items available for sale varied from wayang puppets, gamalon orchestra brass instruments, textiles representing every region of the 2,500 mile archipelago comprising Indonesia, and ceramics. 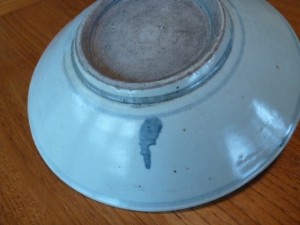 I became interested in ceramic plates that surfaced from points unknown and ended up in Balikpapan. These plates were crude, functional (we use ours regularly), and were crafted in China and what is now Vietnam. In her book, The folk Pottery in South-East Asia, anthropologist Dawn F. Rooney wrote, “Several names have been associated with this type of ware. All are misleading. The most common are ‘Hong Kong’ or ‘Shanghai’ ware or ‘Kitchen Ch’ing’. The first 2 probably derived from the idea that (they were) made in Guangdon Province, but (they were) also made at Dehua Kilns in Fujian Province. The third name, Kitchen Ch’ing, is based on use and proposed dating. Generally, “blue and white tableware” seems an acceptable compromise as a name.” The unglazed ring on the inside is evidence of mass production. To conserve space in the kiln, a wax resist was applied before glazing whereby plates could be stacked on top of one another for firing; the foot of one plate fitting perfectly into the unglazed ring of another. Sand flecks on the base, which adhered during firing, are common.

How these plates and other ceramics ended up in Balikpapan is a mystery. Most likely they were mass produced on the asian continent and shipped to distant ports to exchange for local products and spices. The fact is that hundreds of these vessels sank in the turbulent straits separating the thousands of islands comprising the Indonesian archipelago, and most likely the cargoes were salvaged and bartered at the local level. It’s safe to assume that many items were counterfeited over the years and, through decades of use, attained the patina of the real deal.

While their provenance is vague, what endeared me to these items is the motif—usually a hastily executed indistinguishable Chinese characters that was either brushed on or a pattern applied with soaked leather stamps cut to a desired shape. I also thought it pretty cool that we would be eating on tableware that might be a couple hundred years old. And they were affordable.

By the early 80’s, these plates (and other interesting Chinese bowls & dishes) became collectible and “art” shops replaced the door-to-door venders. One particular shop became a favorite destination on weekends, and I never knew what the proprietor’s agents would locate on their buying forays into the interior of Borneo. Over the years, we collected many indigenous artifacts: beautifully executed Dayak sleeping mats & baskets, embroidered and woven fabrics, and myriad jars and other ceramics displayed in our home. Without question the items that have emerged as the enduring connection to those five wonderful years are the plates we collected and continue to use daily. What was once a collection of 13 plates is now seven. I thought it fitting to document the survivors for posterity.