Seconds after the Trislander accelerated its 3 powerful engines, we were pressed into our seat backs and lifted off the tarmac of Balikpapan’s International Airport for our flight into Borneo’s interior. The plane is especially designed for short takeoffs and landings and was perfectly suited for the ridiculously short runway at our destination, a remote missionary outpost. After a couple hours flying over a sea of old growth forest characterizing this immense island, we spied our runway on a barren plateau surrounded by terrifying bluffs descending into mist-shrouded shadows of the forest canopy. The pilot did an exciting fly-by over the landing strip to both provide me a great photo opportunity and to successfully frighten grazing Water Buffalo off the grass meadow. After a steep descent, he leveled out and threw the engines into an abrupt reverse thrust that allowed us to veer away from the precipice and taxi to the Dayak longhouse serving as a terminal.

We were greeted by members of the small community who made short work of removing the provisions from the small plane’s cargo area. Everything was loaded onto the backs of several short, stocky Kenyan Dayaks, the indigenous people of the region, and they silently disappeared somewhere into the forest. Our pilot, the mail pouch replacing me as co-pilot, waved us a toothy smile and began his solo flight back to Balikpapan, our home from 1977-82.

While “being in the right place at the right time” is an overused cliché, we actually were. My wife and I were on winter break from our teaching assignment at a small K-8 international school contracted by Union Oil of California and had access to all the amenities extended to the expatriate staff and their wives. Indonesian law prohibited women from working in the oil industry and many found interesting ways to entertain themselves besides shopping in town for bounty surfaced from asian shipwrecks. The drilling manager’s wife was herself a pilot and befriended the Filipino crew that flew shuttles into the interior of Kalimantan Timor, the south-eastern section of Borneo governed by Indonesia. Since there was room, she arranged for Sooney and me to join the flight, one-way, and we would then trek several days to the Mahakam River and catch a boat back to the coast. Once there, we’d grab local transportation back to our cozy apartment atop a ridge overlooking the Indonesian Oil Conglomerate Pertamina oil terminal in the Bay of Balikpapan.

Our first couple of nights were spent with the missionaries, and we shared communal meals in the long houses common to Dayak communities. These were well-constructed from bamboo and rattan and were, well, long. Many families shared a single roof and at night would roll out beautifully woven mats onto the pliable bamboo floor. During the day, the mats were stowed and cooking and weaving were activities performed primarily by women. The men were hunter/gatherers and treated the forest as their dearest friend. While hunting and trapping provided most of their protein, domestic chickens and a pig or two lived conveniently beneath the houses, quickly consuming kitchen wastes intentionally dropped through the slats. We observed a symbiotic relationship between the missionaries and the Dayaks; the former provided education and well-being to the community while respecting the traditional Animistic culture prevalent throughout Kalimantan. Fundamentally a territorial people, the Dayaks fiercely protected their tribe’s hunting boundaries, and their buildings were built on the bodies of enemies captured and summarily executed following battle. The bodies of their victims were buried in holes sunk for the center poles of the long houses to ward off evil spirits and the heads displayed as battle trophies. While these construction practices have gradually been replaced with more conventional concrete foundations, smoke-enameled skulls continued to gather dust in in the rattan recesses of the roofs. 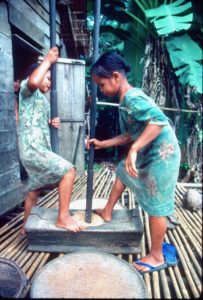 Our trip to the mighty Mahakam River followed a well-used path and we plied it leisurely, passing rice fields, avoiding wooden carts pulled by oxen loaded with rattan, and chatting with locals winnowing and pounding rice on the decks of their simple dwellings. Our packs were light because our meals were arranged to be taken with local teachers. In addition to snacks and water, we treasured our mosquito nets that protected us while overnighting in one-room schoolhouses. On one occasion, we slept in a government clinic and our bed consisted of the surgery gurney with me on top and Sooney comfortably on the bamboo floor below. In addition to mosquitos, the nets protected us from geckos and centipedes that would occasionally fall from the coarse ceilings. Before retiring, we played Cat’s Cradle and practiced our language skills with the children. It was also gratifying to lighten our packs by leaving quantities of donated tennis balls in exchange for the howls of laughter accompanying those pickup stickball games. 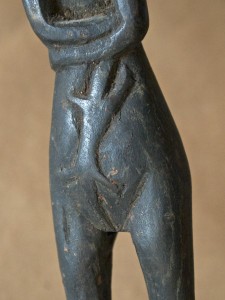 An interesting novelty along our path were the occasional wooden statues planted by Dayaks as protection from misfortune. Some were carved solely to bring blessings on events; others represented a woman in labor. In dire circumstances, Dayak shamans attempted to appease the spirits by scraping a small piece of wood from the effigy corresponding to the approximate location of the malady. This was then steeped into a tea and consumed by the patient. Other statues were placed in auspicious places by the faithful—hunters, for example, used charms to attract game to traps. Our mantra was “take photographs, leave statues” for fear of winding up on the wrong side of a Dayak blow gun. Yep, they hunt birds and small game with poison darts—with astounding accuracy. Never, however, did we ever fear for our lives unless you include mosquito infected areas. Oh, and that lovely yellow snake slithering underfoot that I learned, moments later, could have paralyzed me in minutes—were it not calmed by the trail charms. 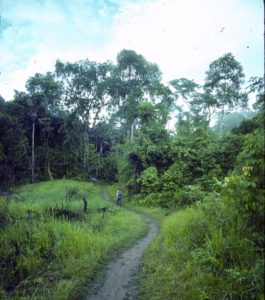 Finally reaching the river, we arranged transportation on traditional long boats used for hauling rattan to the coast. These boats are powered by ancient 2-stroke engines and we were grateful to be upwind from the monotonous cadence of their throaty exhaust. Our boat-mates were rarely traveling far and so we had plenty of opportunities to repeat dialog in what we found to be a rather easy language to pick up. Some stretches of the river narrowed and white egrets would take flight but only for short distances and settle ahead of us. We’d show up, they’d fly ahead, as if in a game. Canoes carved from felled logs served as short-distance transportation for shore villagers and the open-air conversations between our skipper and the oarsmen were noisy and refreshing distractions from the boring din of the engine.

It’s been 40 years since we began our overseas teaching adventures. After the five years in Indonesia, we taught in Kobe, Japan for another five. By then our daughter, Alicia, was in third grade and we found Ashland a good place to complete our 35 years as educators. It was a wonderful career choice and a couple of Dayak statues in our living room remind me how charmed we’ve been.