After nearly a couple weeks of exploring mid- to high elevation ranch land and both Pacific and Caribbean rainforests, we’re traveling over some high mountains on a whim. Our original plan was to return to San José, the capital, and then drive to Palo Verde Biological Research Station (and some seriously HOT weather for a change). Our travel organizer suggested that we travel to the Guanacaste region via the mountain route and overnight at the infamous Arenal Volcano in La Fortuna. It received its reputation for nearly always being shrouded in clouds. We apparently have accommodations at a hotel with the best views of clouds in the region.

Our stay in the the lowlands on the Caribbean side of the divide centered around the small town of Puerto Viejo de Saraquipí. Our intent was to spend the entire time at the La Selva Biological Research Station 5 km. south of town. They couldn’t accommodate us for all 4 nights, so we opted to stay at the more posh Selva Verde Lodge that has been around for years. It’s a significant destination for Rhode Scholar trips (formerly Elder Hostel) and we found the rooms and service pleasant. Following a restful night, we rose at dawn to check out the birds and hired a local guide with the key to the forests across the the Rio Saraquipí. Without the key to the suspension bridge (that comes with the price of a guide), guests are limited to the hotel grounds on the highway side of the river. Birding the Selva Verde grounds was great, but having access to the undeveloped forests across the river took us to the next level.

Based on that experience, we arranged for transportation the following day to the Tirimbina Reserve that’s another 12 km. down the road. Had we known about this low-key place and its cozy bungalows we might have stayed there instead of Selva Verde. What really set it apart from the former is a far superior set of trails at the end of their MUCH longer suspension bridge. We really enjoyed the experience and learned that Tirimbina also offers a special “Chocolate” tour to its guests that combines the forest with a comprehensive overview of growing cacao and how that’s converted into chocolate. We settled for the free coffee and may return some day.

After a couple days we moved 15 km. to the La Selva Biological Research Station that is run by OTS (Organization for Tropical Studies). This is a companion facility to the Wilson Biological Research Station we visited while at Las Alturas and OTS’s other facility in Palo Verde where we’ll stay in a couple days. Being around bright college kids and their instructors living and breathing science is invigorating. We had access to the entire facility and Sooney mentioned it must have resembled what Darwin felt when he first visited the Gallapagos Islands. Critters of all shapes and sizes wandered around with the assurance they’d be respected as expected.

Upon arriving to our new home for the next couple of days, we settled into lodgings located a kilometer away from the cafeteria. We’d get to know that path quite well but the first time, roller bags in tow, was unremarkable. After the requisite shower, we walked back to the dining hall and grabbed a tray full of fresh fruit and the requisite rice & beans. A moment later, we were joined by a couple who’d arrived a day earlier and really knew the drill. Ron & Nancy are published authors who compile video articles and post them on YouTube. Their focus for this visit were insects, and we enjoyed their commentary during our after-dinner walk through the pitch-black forest back to our bunks. 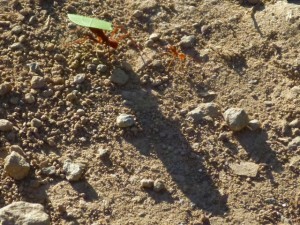 They pointed out colonies of leaf-cutter ants along the journey and posted a terrific video explaining much of what we saw. We observed several caravans returning to their colonies with 1-2 cm. pieces of plant debris in tow. While unusual in daylight, these evening processions featured THOUSANDS of ants, trudging along beaten paths cleared of every bit of jungle debris. They’d appear out of nowhere, cross our path (or parallel it), and then disappear back into the forest. Throughout the 20-minute walk, always on the alert for venomous snakes, we were repeatedly distracted by pixy-like glow flies that competed with the shiny sparkle of insects, frogs, and other critter’s eyes reflecting back into our headlamps. Seeing these magical occurrences is always exciting, and by staying at a research facility where knowledgable people who know the stories behind these events are sharing meals with us is priceless.

Another resident scientist named John Smiley retired from a career with the University of California. He and his wife, Kim, are living at La Selva for 6 months while he pursues his passion for jumping beetles. In fact, he isolated one formerly unknown subspecies and may some day have his name integrated into a scientific one. His wife, however, doesn’t do beetles; she prefers volunteering because it allows her the freedom to stay home and knit all day if she wants. But that isn’t often as she usually spends 5-6 hours a day in the museum she created featuring the restored remains of road kill that she restores as skin samples. She can’t stand seeing dead animal remains wasted, and has amassed quite a number of skeletons of animals researchers have found in the forest. Monkeys do tumble from trees now and then, and healed fractures show that not all falls are fatal. This particular skeleton also showed signs of advanced arthritis and worn teeth suggesting it was an older adult when it died. When the hide warrants it, she stuffs ’em with polyester fill so visitors and local school children can handle them. She has quite a reputation for stopping vehicles abruptly in order to scrape buzzard-ravaged “road kill” into buckets for inclusion into her museum. It was interesting handling the stuffed remains of animals we’d only observed and/or photographed (or wished we had like the beautiful skin of an ocelot—the dwarf leopard). It’s not like she spent her career as a taxidermist; her training consisted of a local community class she took while employed as a outdoor education teacher in Irvine, CA. The rest is self taught and her legacy will surely educate visitors after they depart.

Meanwhile, Sooney has identified almost 200 species of birds on this trip. The list will continue to grow as we’ve two more unique biological regions to visit before returning home. Here are the birds ID’d in the Puerto Viejo de Saraquipí region: