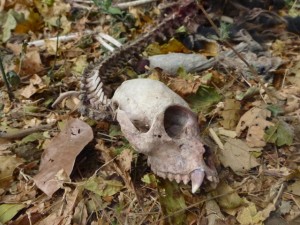 Our first walk in this dry, coastal lowland and what do we see on the road but a monkey skeleton. I immediately though of Kim (see our last post) and her “dead kill” museum. Because these research stations we’ve been staying at are administered by the same organization, there’s a chance the staff here will freeze the remains and deliver a surprise to Kim via some inter-office courier. No matter where you wander in this forlorn region, there are new sights unfolding everywhere. An expansive wetland area maintained by the National Park system sprawls for hundreds of acres directly across from our bleak dorm room. Seeing me climb into the upper level of a rickety bunk bed is really painful. Not that I can’t do it, but then maneuvering beneath the mosquito net is another thing. The heat is intense but a steady (warm) breeze moves the air around. Reaffirming my suspicion that I’m a charmed Italian reincarnated from an illustrious former life, a Dutch tour leader handed me a cold Imperial (the local beer of choice) a moment ago. My first in a week, and delicious to the last drop.

The drive from Arenal volcano took forever—not necessarily due to the road conditions but the mere lack of them. We had to circumvent a lake the size of Rhode Island simply to connect with a road heading west. After about 4 hours, we arrived at the sign directing us to Palo Verde National Park. About 2 minutes later, the pavement ended and we spent another hour on some of the worst road surface we’d experienced the entire trip. Thank goodness we’re traveling in the dry season—rain would have made the 25 km. impassable. Arriving at dusk, we headed directly to the cafeteria and feasted, as usual. Fresh fruit, beans & rice, and platefuls of salads, fresh tomatoes and cukes. Yum!

The refreshing breeze that’s blessed our entire visit to Palo Verde National Park accompanied our morning adventure on the Rio Tempisque looking for Crocodiles and water birds. While a beautiful day for inhaling outboard motor fumes, it wasn’t particularly auspicious birding except for the Boat-billed Heron, a new bird for us. The dock was only 5 km. from the research station so we walked back and saw several new birds. It’s truly been that kind of trip: regardless of where we’ve stayed (Alturas, Carara, La Selva, Arenal, and now Palo Verde) or the elevation (from low coastal, through the wet midlands, and into the upper stratosphere reaching 11,000′ at one point), we’ve seen new birds right and left. A marvelous experience regardless of our having barely missed seeing the other 75% of the country’s 870 identified species. Our curiosity for scientific information was fulfilled in a conversation with a visiting Costa Rican microbiologist the morning before we departed. His specialty is anti-venom serum that is produced locally and is readily available to all CR citizens due to their nation-wide health care. This is especially important to those in the lower economic levels who commonly work in agriculture where the highly venomous Fer-de-Lance snake resides. In La Selva, one of the security guards has been bitten twice and with immediate medical attention he was back on the job the following day. This is not the case in all Latin American countries, we learned. The cost of producing the serum is dear but subsidized by the government due to its importance. Other countries, e.g. Ecuador, have the serum but administer is differently and without the success of CR. Mexico is attempting to make the serum and provide it world-wide and is butting heads with the FDA for distribution in the United States. While we were in Costa Rica, there was an election and one of the candidates is suspected of succumbing to pressure from the International Monetary Fund (and their influence on pharmaceutical companies) and he is attempting to reduce the quality of CR’s national health care. As it stands, the best doctors and equipment are in public hospitals, not private, and patients of all economical means are cared for equally. In this recent election, it is hoped there will be a stop to the momentum to marginalize the health system. It sounds like a battle we’ve experienced recently in the US. 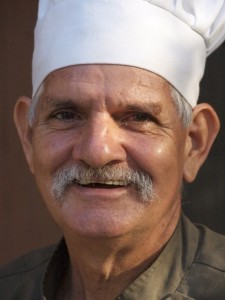 Our 3 days at this facility will be the third and final OTS biological research station we’ve visited in our 3-week visit. They have presented us a version of Costa Rica that aligns nicely with a travel style we’re accustomed to. The 1-hour of bad road connecting us with our scheduled air-con cruiser back to the capitol, San José, is merely one additional Costa Rican experience that some travelers will never experience. Lucky us. While not many of our accommodations have exceeded 2-stars, they’ve been clean and our overall impression exceeds any rating imaginable. Interactions with Costa Rican residents have been, by far, the most enjoyable part of our visit. Rather than be isolated from the local level, our trip embraced the valued input that only a knowledgeable resident can provide. Where else could one expect Chef Raphiello to meet us each morning at the dining hall with hot coffee and a hot tip of where to see a favorite bird, reptile, or monkey. I think these critters have become accustomed to the friendly smile beneath that starched white hat. And for a good reason. Adiós, Costa Rica y pura vida.

Following are the the bird (and critter) lists for this section of the journey (totals for the trip appear at the end):

City Park in Bagaces (en-route to a taxi stand for the shuttle back to San José) House Sparrow, Rock Pigeon