At the southern end of the long range of hills and mountains that straddle the borders of India (Assam), Bangladesh, and Burma (Myanmar), traditional Khami Chin women wove breast-cover fabrics for use in ritual-dance during important ceremonies. These rectangular fabrics, known locally as akhin required considerable technical and artistic skill and feature densely patterned designs that are usually geometric.

Akhin fabrics are woven on backstrap looms as single-sided supplemental-weft textiles. They typically used handspun cotton combined with fine-spun silk yarns in the weft patterning, especially in the two narrow bands that run in the warp direction of almost all Khami akhins. In some cases, beads or glass buttons added more embellishment along edges. What characterizes the finest pieces, generally made by older and experienced weavers, is patterning so fine as to provoke real awe at the weaver’s technical prowess, concentration, and sheer patience. This is no accident. In the older, traditional Khami Chin culture, as in many South East Asian “tribal” cultures, women gained much status and respect through their weaving skills.

Many akhin feature an unusual weaving technique called “false embroidery,” which adds yet another layer of visual and technical appeal. In this complicated technique, supplemental weft yarns (usually silk) are worked into the fabric on the loom using a porcupine quill. They are wrapped around both weft and warp yarns in a diagonal direction. The result is a subtly raised and jewel-like appearance in those patterns where it is employed and are not visible on the reverse side of the weaving. This differs from “true” embroidery by being done during the weaving process, not on a completed textile. Embroidery is the embellishment of the ground fabric by sewing of an additional yarn into a completed textile. In rare instances, Chin weavers inserted floral, animal, and even human motifs. 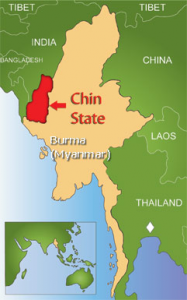 The Khami Chin are one of 50 related groups or clams known collectively as the “Chin.” The Chin, along with related Naga and Burman peoples, migrated down into their current locations from northerly origins in eastern Tibet and southwest China, in the first millennium. All belong to the Tibeto-Burman branch of the Sino-Tibetan languages family. The Burmans went on to become the dominant majority group residing on the plains of Burma, adopting Buddhism and creating a number of large kingdoms along the way. The more isolated Chin and Naga retained “archaic-animist” religious practices for which these textiles played a role. Half of all Chin live in india, half in Burma, with scattered smaller numbers in Bangladesh.

Chin (and Naga) traditional cultures and arts generally survived into the mid-late 19th or even early 20th century, but quickly eroded from that point due to the forces of modernization, missionary work, etc., as has happened the world over. For that reason, these fabrics are not generally worn as intended—unmarried women traditionally adorned breast covers while married women went topless. Today, when circumstances warrant their use, the breast cover is worn outside a commercially made blouse or shirt. In recent years efforts by the United Nations, numerous NGOs and commercial parties have led to a rekindling of these weaving traditions as handicraft-souvenir production. As a result, a small but growing number of Chin women are creating works of beauty and earn much-needed money from it.

Source: notes adapted from those provided by J. Barker, our friend and accomplished ethnic and tribal art collector.