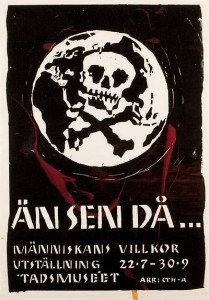 The poster in our collection is titled Än sen då … (So What?) and is a silk screen printed by the artist, Christian Kajanus, in 1968. The poster was created in association with an exhibition at the City Museum in Stockholm that focused on the world’s human condition: environmental degradation, population growth, resource utilization and fairness. The exhibition was made mainly by Mats Reneland, Mats Henriksson and Ivar Fernemo, all architecture students at Chalmers in Gothenburg, Sweden. The Än sen då … exhibit was first displayed at the City Library in Gothenburg in May, 1968. I obtained the poster toward the end of my academic year spent at the University of Uppsala in Sweden.

AFFISCHERNA 1967-1979 (The posters 1967-1979) is an Internet exhibition displaying Swedish alternative poster art from 1967 to 1979, an important part of our 20th century cultural history. Håkan Agnsäter collaborated with Lasse Pettersson during the spring and summer of 2007 and, by October 14th, the exhibition premiered on the Internet. Since then, over 50,000 registered visitors from as many as 67 different countries have viewed the exhibition.

After visiting the site, visitors may view the ENTIRE online collection separated into categories. On the left of the site is a drop-down menu URVAL (“select”) that displays all the categories included in the exhibit. Translated from Swedish, the categories are: May 1st, Film, NLF movement, The People in the Picture – Cultural Front, Feminist Movement, Flyers and Advertising, Environmentalism (Musikrörelsen – our poster), Music Movement, Politics and Demonstrations, Political Art, Theater, Tour Posters, Exhibitions, Election Posters, Misc.

Håkan Agnsäter started collecting posters in the early 70s when he was a drummer in the band Solen Skiner (The sun is shining). While on tour around Sweden, he saved each and every poster announcing their concerts and soon began collecting other posters. In preparation for this exhibit (AFFISCHERNA 1967-1979 – The posters 1967-1979) he wanted to supplement the approximately 100 posters he had collected so far with posters from other collectors. He contacted old friends, musicians and artists in the quest for more original posters from the alternative music movement, the political movement, the environmental-, womens lib- and the FNL-movements, and more. His goal was to present a broader picture of what happened within poster art during this time, a period characterized by playfulness, humor, impudence and commitment.

Many of the posters are directed against the imperialism and commercialism of the West. Several others deal with solidarity and the spirit of community. Some only display information about coming music festivals or demonstrations, a kind of SMS or Facebook message of the times.

There is also a publication commemorating the event.  The book contains about 220 photographed posters and interview with the artists. It’s divided into chapters Alternative Music Movement, Solidarity at home, International Solidarity, Women’s Struggle and Environmentalism.