We’re back into nature after a week in Austin—that’s not to suggest Austin doesn’t have its share of nature. Quite the opposite, but I’ll get into that later. It’s just that hiking or cycling behind Sooney has become such fun. She personifies Fishing for Birds, and approaches her sport with consummate skill. As an angler would work a stream, she walks silently down a path, ever so slowly, pausing at almost imperceptible movement in nearby foliage. Suddenly, she raises her binoculars to a nearby oak as if responding to a trout striking one’s fly. She scans the area, using the bird’s song to help identify it—her knowledge of bird types and their songs is vast. Small birds find safety in dense shrubs, and the ever elusive warblers hop around with an eye on us and the other on food. When birding in Texas, we’ve also learned to to keep an eye on where we’re standing—a basking rattlesnake or mound of fire ants can ruin a good time in a hurry.

It’s my assertion that anyone who is a birder would be a fine angler. And vice-versa. It’s all about the prey. And, of course, the demeanor of the stalker. Trout live in protected areas that provide food in a timely fashion. So do birds. Chilling in the cold backwash of a large rock is perfect habitat for a trout, and our recent search for the Golden-cheeked Warbler in Balcones Canyonlands National Wildlife Refuge found it gobbling up insects in a particularly bountiful oak. And it wasn’t alone. Dining in that same tree were 6 other species of birds. “If there’s food, they’ll be there.” Fish? Birds? There’s hardly a difference. Fish gather when there’s a hatch of insects, salmon flies falling silently into the water. Suddenly, a small ripple indicates a fish surfaced for a tasty meal. I don’t think it’s a reach to say that fish rising in a quiet pool is theoretically comparable to the sound of a bird’s call. 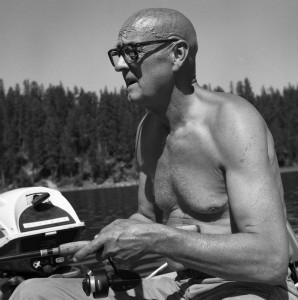 It shouldn’t come as a surprise that Sooney birds like a fisher since she comes from a family full of ’em. Be it her brother wading up a stream near his home in Montana or her father spinning plugs on Whitefish Lake, stalking game runs in her blood and she’s come into her own as an exceptional birder. That explains her sighting 11 new lifetime birds over the past 5 weeks. Oh, by the way, we’ve traveled roughly 3,000 miles through 2 time zones and 7 states along the way. Colorado’ll be #8.

My last post found me gushing over the incredible beauty of Big Bend National Park, and the gallery of photos justifies my enthusiasm. We’ve learned, however, that Texas is not only huge but gracious in its offerings. A day’s drive from Big Bend found us near Del Rio, TX, at the Amistad International Recreation Area that consists of the US portion of the International Amistad Reservoir on the border to Mexico. The area offered our first look at the scissor-tailed flycatcher, a bird we’d only seen in Florida. We were beside ourselves (until they became so common a week or two later that we relegated them to ho-hum birds). The same can’t be said about the Yellow-breasted Chat or the Scaled Quail, both of which were spotted near our campground.

We were set to arrive in Austin in a few days for the 45th reunion of my Peace Corps training group, so we limited our initial visit to a single night in South Llano River State Park, a lovely birding and cycling environment. Sooney explored the area earlier and we returned on our bikes the half-mile to a shaded spot along the river that runs through the park. “There, right over the lip of that bank,” she whispered. We crept slowly to the edge and there were a nesting pair of Green Kingfishers, posing on the limb of an overhanging tree. She just knows—and loves to share.

Texas parks have much to offer, and their tidiness can loosely be associated with Lady Bird Johnson. Johnson was a lifelong advocate for beautifying the nation’s cities and highways (“Where flowers bloom, so does hope”) and the Highway Beautification Act was informally known as Lady Bird’s Bill. Signs along the road proclaim “Don’t Mess With Texas.” Lady Bird was a gentle person who outlived her husband by 34 years, and we learned how important she was to the state of Texas as he was in his single term to the state of our nation. On her 70th birthday, she and actress Helen Hayes founded the National Wildflower Research Center west of Austin, devoted to preserving and reintroducing native plants in planned landscapes. In 1994, the center was officially renamed the Lady Bird Johnson Wildflower Center, in honor of Johnson who had raised $10 million for the facility. She was also involved in the Town Lake Beautification Project in downtown Austin. A lake of significant size, created by damming a section of the Colorado River (Austin’s got one, too), its shoreline was rapidly eroding, attributed in part to the wakes of power boats. Lady Bird spearheaded efforts to restrict boating to those with electric motors. It was on one of those that our reunion group enjoyed a sunset cruise beneath the Congress St. Bridge where mostly female, pregnant Mexican free-tailed bats migrate North to give birth. As the setting sun perfectly illuminated downtown Austin’s gorgeous skyline, an estimated 750,000 bats departed their nests to consume nearly ⅔ of their body weight in insects. The city also recently finished the final boardwalk that completed a 10 mile cycling and biking hiking path around what is now named Lady Bird Lake in her honor.

Sightings along this leg of the journey:

En-route to (and at) Deerskin Ranch

* Life birds in this posting: 7