With Alicia’s bag still still somewhere in Amsterdam, there’s been a pall hovering over our arrival to Bavaria, the southernmost region of Germany. Considered the gateway to the Austrian alps farther south, Bavaria’s major city, Munich, features many characteristics found in more mountainous regions. I’ve seen more than one fellow sporting lederhosen during our visits to “biergarten”, and a local diet of sausage, sauerkraut, and tasty beer has somewhat diverted our frustration about KLM’s screwup. In fact, were you to add pretzels and cigarettes to that diet, you’d pretty much characterize typical fare we’ve observed so far. The first four we can deal with but tobacco smoke drapes the city like a dark cloud. It’s surprising indeed for so progressive a country, and discarded buttes have tainted an otherwise enjoyable return to the EU after 8 years.

We’ve recovered from the expected jet-lag quite well, and only awakened somewhere between 2 & 4 a.m. this morning. Although we’re lodging a mere 10-minute walk from the central train station, Munich is relatively quiet for a city of 5 million. Our arrival was smooth; from the airport, we jumped onto the S8 train that efficiently plies the 40-minute ride to town and purchased a multi-day metro pass that will get us anywhere we want within reason.

Our inaugural adventure was to the Englischer Garten, allegedly the largest city park in the world. Approximately 910 wooded acres and covered with myriad hiking trails, we started well to the north and accessed the park through a spacious cemetery that immediately stood apart from the what we were accustomed to. It wasn’t the head stones that caught our attention (although one stunning monolith identifying an entombed architect MUST have been designed by the occupant’s tenant). What impressed us were manicured hedges approximately 5’ high that demarcated each plot into its own private space. In addition, not a plastic ornament could be seen and flowering plants were often integrated into each space and flourished.

Entering the English Garden, we meandered along well-maintained biking/hiking paths although some were set aside for walkers and off-leash dogs and their attentive owners. More than one shallow creek flows adjacent to the paths, and at one point a swing hung suspended a foot above the water’s surface. (Yea, it would have been fun but we chose not to.) Birdlife flourished and a spirited Great Spotted Woodpecker provided us a lingering look (Sooney saw on in Finland several years ago so it doesn’t qualify as a “life” bird).

About half way through our walk, we came to a large lake with the obligatory ducks, boat rental, and Biergarten. Actually more than beer because most patrons were cleaning plates of sausages, french fries and, of course, beer. Beer in BIG mugs. Our refreshment consisted of my “Dunkel” beer (a darker, ale-like brew) and Alicia chose wine. While my beer was pulled from a tap, the server pointed her to the glasses and the bottle with a “help yourself” smile. Self-serve wine was another surprise and nobody appeared to abuse it. 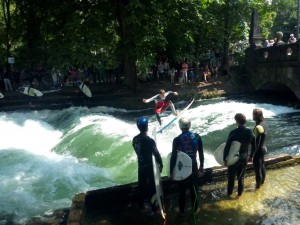 We continued our walk, and the closer we got to town the more visitors we encountered. Some even in horse-drawn carts. The similarity to New York’s Central Park was noted although it dwarfs in comparison to the garden’s 1.4 sq. miles. At the southernmost border of the park is “Munich Residenz” and its surrounding gardens. We’d heard about the surfing community riding waves in the 30’ wide source of the parks gentle creeks. Gentle the surf wasn’t however, and the “wave” was enjoyed by a dozen or so riders of varied skills and a hundred spectators enjoying the perfect weather and unusual entertainment. There was a unspoken code of entering the wave, one-by-one, riding it for a spell, and dropping out for the next in line. The queue rarely exceeded 2 riders per side and they slipped (or jumped) in without much fanfare. We saw some good riders, both men & women, and one guy really got our attention by performing 360° turns in the narrow space. He was justifiably rewarded by his peers, waiting patiently for their ride, who drummed their approval on their short, fiberglass boards.

After a spell, we continued our walk toward the multifaceted Residence House and happened onto a photo shoot of some gymnasts juxtaposed against the glass roofline of what appeared to be a botanical enclosure. It was most likely for an apparel ad because before he took off his shirt it had a tag dangling from the collar. His stunt was remarkable and spoke volumes to his athleticism and strength. But also to the public’s interconnection with these massive structures. Regardless of where we turned, residents were using the space as if their own. Alicia pointed out how comfortable folks looked, privately playing bocce or simply eating their lunches on the shadowed stairs of colossal buildings. Or reconstructions of buildings as most were destroyed by extensive allied bombing. Unlike ultra-modern Frankfurt, Munich city planners agreed to rebuild the city as it looked before the war. 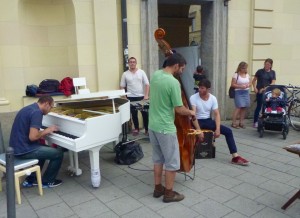 It was getting close to nap time so we grabbed some soup on our walk back to the hotel. Not without some fun, however. Busking is a lucrative business in the crowded pedestrian-only thoroughfares and we were thoroughly entertained. We wandered by a terrific jazz jazz combo (complete with a white grand piano with a broken leg), enjoyed a comedian working a crowded cafe by brazenly messing with pedestrians as they walked by, and were amazed by the “statue” of a gold miner whose cup magically produced a never-ending flow of water. It was only when he took a break that I observed him disconnecting the tube up his sleeve connected to his stool in the catch basin where a battery-powered recirculating pump kept the water flowing. Very clever and enormously popular as evidenced by the coins in his mine.

Not your conventional walk in the park by any means. And this was day one!