The Alaska Marine Ferry system provides transportation to several cities up and down the state’s “Inland Passage”. Locals refer to it as the “South-east”, whereas everything north of Skagway is simply “The North”. All ferry terminals except the route’s most northern (Haines & Skagway) and southern (Prince Rupert) are accessible only by boat. This is the fourth leg of the marine section of our journey and, like the first three, it has been fascinating both on and off the vessel. My naive ignorance when booking our trip 4 months earlier was that ferries were like trains or busses; you learn how to read the schedule and simply hop on and off at random places on a map. I shouldn’t have been surprised at 1:45 am boardings because southbound Amtrak trains don’t arrive in southern Oregon until the middle of the night as well. I’ve also learned that it’s not uncommon to be stranded (not necessarily a bad thing) in a town for 3-4 days because of a limited number of ferries and the economic significance of certain ports. With the oil and timber industries having tanked, tourism is now paired with fishing as major sources of revenue, and you don’t catch salmon from a ferry. Big ticket tourist destinations maintain scheduling priority, and we’ve isolating the charm in being stranded. 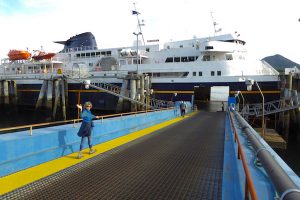 The vessels are as inconsistent as the lines running them. The Black Ball ferry from Port Angeles, WA, to Victoria, BC, is a model of efficiency. Everything from checking in, to loading, to customs and, 90 minutes later, disembarking into the very center of Victoria with the Empress Hotel overseeing the whole process is remarkable. Farther north, the BC Ferry from Port Hardy to Prince Rupert is really first class; a new boat, attendants in starchy uniforms, and prime rib in the buffet. I don’t know about the ship the Northern Expedition replaced, but it takes a brute to power through the high seas comprising the Queen Charlotte Sound. A gentle brute, to be true. In the words of a Canadian citizen working for the American Alaska Marine Ferries sailing north from Prince Rupert, the Canadian ferries’ budgets are what the Alaskan ferries dream about. Nevertheless, the Marine Line’s ferry MV (Motor Vessel) Matanuska, built in 1963 and running 2 roundtrips per week, has completed over 3,000 trips connecting the more remote locations in southeast Alaska. Interestingly, the BC ferry Coho (our ride from Port Angeles to Victoria), is the predecessor of the Matanuska. The latter is a clone of the Coho with the exception of a couple decks being added to provide staterooms for the long Alaskan sectors. (Our Wrangell > Petersburg > Sitka > Juneau sailing lasted 27 hours including layovers.) Plenty of time for my fascinating 30 minutes with the ship’s Purser and, with only 162 passengers aboard (of the 492 capacity), she had time to brag. MV Matanuska features a fully-featured cafeteria in the stern, a semi-featured lounge mid-ship, observation deck in the bow, and 105 staterooms that sleep nearly 250 passengers. In addition, there’s an outdoor walking/exercise deck all the way around the ship. At periodic ports of call, we’re able to hop on and off, sometimes for the 45 minutes it takes to load and unload vehicles, others for 3 hours (delays attributed to tidal fluctuations). These longer visits have fortunately been around mealtimes affording us unexpected visits to Ketchikan and Sitka.

Our first Alaskan destination was Wrangell, that included a 3-hr. layover in Ketchikan. It was dinner time and we enjoyed the mile walk to the Oceanview restaurant that featured an outdoor terrace where seaplanes competed for attention with eagles fishing the bay. That was followed by another 6 hours on board with us unloading at 11:45pm. Finally dark. Unusual for Alaska in summer, but dark nonetheless. We were a caravan of 4 RV’s and were supposed to park for the night at the city park. Well, we missed it and ended up in the city’s RV park 5 miles farther down the road. No problem as we hooked up, slept well, and awakened to another adventure. With no pressing needs in town, we stretched our legs on the 2-mile Rainbow Falls trail that was entirely “paved” in pressure-treated lumber, steps included. Many steps. We then proceeded on forest roads to Earl West Cove for 3 days of camping, kayaking, yoga and music. Oh, yea, and fishing. Again tides came into play after I first caught a Dolly Varden and then snagged two lures at high tide. No problem. 4 hours later the water level dropped 15’ and I easily retrieved my lures from the exposed rocks. Lesson learned. Our inflatable kayak provided ample access to a massive cove, replete with inlets, islands, dolphins and seals. Sea birds were abundant (see below) and in situations where creeks flowed into the cove we spotted mink and otter. We even got stuck at the confluence of Salamander Creek where we’d stopped for a break and were left stuck by the receding tide. Lesson learned #2.

On day 3 at Earl West, our companions departed and while Sooney practiced Yoga I hopped on my bike to find a safe place to test our bear spray canisters. I was paying careful attention to avoid tire-damaging rocks and spooked a covey of Blue Grouse. Actually they spooked me. One flew into a nearby tree and froze, effectively blended into the foliage. I dismounted and stalked him as if hunting, but hunting for photos is less lethal and I do it far better than fishing. After a lengthy visit with the bird, I proceeded to a windy knoll and fired off a blast of cayenne pepper spray. Maybe even some mace thrown in for good measure. As per instructions, I remained upwind and pity the poor critter on whom I use this stuff. Gag! 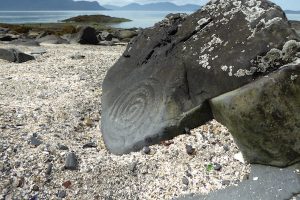 We had a 6 pm ferry to catch in downtown Wrangell, so we stowed our gear the following morning and reunited with our camping buddies at Petroglyph beach. It’s unknown who carved these interesting impressions, but of the 88 allegedly hidden in the area, we located several, a few with the assistance of Phyllis, a local who collects things. She interrupted her search for small shells and pointed out a few, interspersed with a running history of the great fire that wiped out much of downtown Wrangell over 50 years ago. Another living treasure was Ruby, the owner of Wrangell’s music store who was accompanying visiting family to the beach. While she preferred Branson, MO, for its fiddling festival, she never gave up on Wrangell and is slowly paring down the inventory of her store. Her great-grandkids appeared more interested in slugs but we enjoyed Ruby’s telling how a brave woman knelt and confronted the advancing flames with prayer. Downtown was built on pilings, and they were burning furiously. Suddenly, the winds shifted and both she and many of the structures were saved. We learned that the custom then was to relocate the destroyed parts of town to another part of the beach—why not just beyond those weird carvings up the coast? There the debris lies, painfully visible at low tide, and it remains an interesting source of stuff for collectors like Phyllis.

After 4 days ashore in Wrangell, we boarded our old pal MV Matanuska after it had completed an entire roundtrip to Juneau and back to Prince Rupert before returning to Wrangell for its second time that week. Our 6pm departure allowed us a 3-hour stop in Ketchikan where a team of little league baseball players and their coaches boarded en-route to Sitka for a weekend tournament. You’re making a strong commitment when a “road trip” includes an 18-hour overnight ferry trip. But 10-year-olds? The kids were nevertheless well-disciplined and a couple captains let their teammates in morning stretching. One of the coaches filled us in on his job as a container crane operator. Based in Ketchikan, he’s responsible for loading those semi-truck sized storage units onto barges, each containing 70,000 pounds, much of it frozen fish. Each barge can hold upwards to 700 containers and we saw several traveling south throughout our journey. Doing quick math has each load of Alaskan seafood per barge weighing in at around 24,500 TONS. And this guy’s job was to make sure everything is loaded properly, is balanced, and all done in a timely fashion. There is so much demand for his services that he sacrificed 30 hours of overtime to spend the weekend with his team. What a guy, and what a responsibility! When loaded, these rectangular, multi-storied structures are quilt-like in appearance, often topped off with a variety of vehicles for variety. One barge passed us with a U-haul truck atop a stack of orange and blue.

The final six hours of this leg or our journey followed a surreal visit with an old friend from our Japan days. Our 3-hour layover in Sitka had us disembarking around dinner time at a terminal located 7 miles from town. Locally operated shuttles provided us transportation to town where we grabbed a bite. On a whim over thick clam chowder, we Googled a friend (Alicia’s 2nd grade teacher) and scored. In less than 10 minutes, she scooped us up for a reunion of colleagues at Canadian Academy in Kobe, Japan, where we both taught. In those situations it’s OK to drop as many names as possible, and we had 30 years of catching up to do. With a brother 3 hours north of us in Eugene, we anticipate a longer visit.

Leaving the Sitka straits for our final push into Juneau, a crewman was dutifully manning the bow looking for rogue logs and random vessels. In addition, it was his responsibility to drop the front anchor in an emergency. Glassy water and an uncanny stillness allowed us to chat despite his position on a lower deck. He was friendly and probably bored. Suddenly, he pointed to the starboard into a stand of spruce. “Look! A flamingo,” be blurted, clearly excited at seeing another variety of bird besides Bald Eagles and Ravens. While more likely an egret, we’ll keep you posted in the event a flamingo does appear.