We’ve been living in Ashland for 28 years and hadn’t yet visited Summer Lake. It was time. Located west of Hwy. 395 running between Burns and Lakeview, we approached it from Hwy. 97 and added a bunch of miles onto our new Subaru during the journey. Our traveling companions were Barbara Massey and Becky Snow, both adventurers eager to see the flora, fauna, and geology of what was new territory to 3 of us. Barbara, in her 93 years on the planet, has seen nearly everything and never tires for more.

Our route took us through Rocky Point and we stopped at Petric Park for a brief comfort stop. The park is memorable for both Sooney’s inadvertent swim years earlier while climbing out of a tippy kayak and for the wonderful sighting of an American Bittern shortly before the dunking. This visit was different: fabulous weather highlighted fields of wild iris nearby, and a cute Common Grackle caught my attention splashing in the shallows of the boat ramp. Petric Park is notable as the takeout point after having floated the Wood River. The final ½ watery mile to the boat ramp follows a channel separating boaters from Klamath Falls’s huge Agency Lake and the Wood River Wetlands.

It’s a mere ¼ mile from Petric Park to the Wetlands parking area and, from there, we continued on foot down Dike Road, a narrow path bordered by a watery corridor on one side and marshy shallows of Agency Lake on the other. It was really birdy and our “brief” visit took up the better part of an hour. On another visit we’ll launch our inflatable kayak and ply the wetlands. But our Summer Lake beckoned so we carried on.

We took the Chiloquin Bypass to Hwy. 97 north and took Hwy. 31 east to Silver Lake. Along the route is the Klamath Wildlife Refuge Headquarters that warranted a stop if for no other reason that none of us had ever visited the place. The ranger was very accommodating and even gave Sooney an envelope containing rattlesnake eggs. (She fell for that hook, line, and sinker, her expression priceless when the rubber banded paperclip inside the envelope released.) Outside, a pair of Evening Grosbeaks were chowing down on seeds in a nearby Ponderosa Pine. 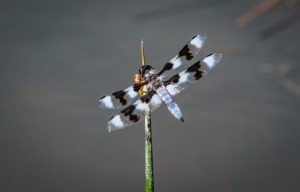 We arrived in the late afternoon and checked into The Lodge at Summer Lake Lodge. It’s conveniently located across the street from the Summer Lake Wildlife Refuge and we enjoyed a remarkable 8-mile drive through the refuge on the one-way gravel road. Well into our self-guided tour, the setting sun warmed our surroundings as only dusk can but there we were, miles away from our cottage’s kitchen and the dinner we’d prepared. There are several primitive campsites in the reserve and we’ll attempt to return again for a lengthier visit.

When checking in, Barbara and I learned about the fabulous waffles served in the lodge, so it was terribly disappointing the following morning to learn there was an hour-long wait to get into the place. Mind you, this is a town of about 15 buildings, but being Saturday we struck out. So, after a bowl of granola and a short revisit to the section of the Refuge we’d hurried through, we took off to the Malheur Field station where Barbara rented a house for a couple nights. It took us the better part of a day to cover the 150 miles, passing through Christmas Valley and Riley en-route. The Field Station was built years earlier and is pretty run down. It nevertheless provided us the base for our birding exploration, and the unoccupied staff house sheltered us from swarms of mosquitos and the impending rain. Before settling in, we just had to visit the headquarters for the Malheur National Wildlife Refuge to see first-hand any damage after its occupation by the those outlaws, the Bundy bunch. We learned that 1.5 million dollars was spent restoring the headquarters to its former condition before the takeover. We learned that the Headquarters building was remodeled and, fortunately, none of the artifacts in the museum were tampered with. By and large, the wildlife was unaffected although formerly accessible roads were no longer open to vehicles, making it tough to get around.

The high point of our weekend was driving the length of Center Patrol road that follows the Donner und Blitzen River and parallels Hwy. 205 to French Glen. Since it was raining and really buggy, we spent the major part of the day in our comfortable car, grateful for clean windows, and stopped for wildlife and landmarks—narration provided by the CD obtained at the headquarters. The road ends at the P Ranch, not far from Page Springs Campground that warranted a visit looking for the Virginia Rail reportedly in camp. The final miles or so passes through a section called Bobolink corridor, named for the elusive bird that travels from mid-South America to this refuge for enthusiasts like us. We parked adjacent to its favorite habitat of tall grasslands on either side of the road and waited. Not long, actually for Sooney spotted a dark speck in a distant tree. A moment later, the Bobolink flew right toward us with a clear intention to land. Alas, another vehicle approached (one of 5 all day!), completely unaware of this “life” bird and interrupted a potentially epic encounter. Alas. 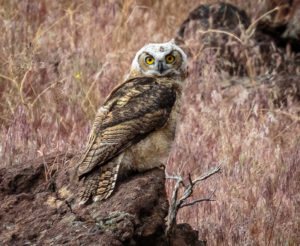 By then the rains had blown over and a Kodachrome sunset accompanied us along Hwy. 205 to the small community of Diamond where we shared a family-styled meal. The servings were huge and Barbara happily filled a take-out box for her dinner the following night. Aside from the food (and company, of course) a remarkable event occurred outside during the short wait for dinner. There, perched on the remnants of a dilapidated building was a Great Horned Owl giving me a glance now and then. Hoping to get a better photo opportunity, I spurned formations of Kamikaze mosquitoes and bushwhacked through rain-soaked grasses to a spot behind the building. What I wasn’t expecting was another owl: this one a fledgeling whose gray coloring blended into the rubble. It flushed, scaring both me and my companion, the hotel’s three-legged dog, and flew to a nearby mound where it posed, preening its downey splendor.

Our route home the following morning passed through Burns. I’d picked up an annoying screw wreaking havoc with our car’s warning lights. Les Schwab fixed that in about as much time as it took to order chocolate shakes at a nearby diner. Tire fixed and fortified with the breakfast of champions, we headed west on Hwy. 20 and, at the infamous truck stop called Riley, headed south on Hwy. 395 to Lakeview. That stretch of highway deserves a revisit for several reasons: fields of obsidian right along the highway, a clean rest stop across the street from a clueless Kill Dear sitting on a rocky nest 6’ from the highway, and massive Abert Lake that was full due to an excessive snow pack. (Sections of the alkaline lake become seasonally dry and provide an interesting panorama featuring a barren surface.)

Once through Lakeview, our homing instinct navigated our route that included a lunch stop at wonderful Sprague River Park Day Use Area Barbara pulled out of her phenomenal collection of neat things. The next neat thing was home, 742 miles, one flat, and a couple Bobolinks later—and lots of photos to illustrate the trip (click any image in this post to view the gallery).