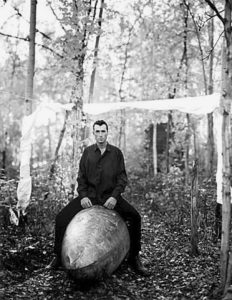 The other day I happened onto a sale and a stunning 16×20” black & white photograph caught my eye. It was on the ground, leaning unceremoniously against a box covered with toiletries, and was protected by a cracked framing glass that seemed redundant as there was no frame in sight. I learned from the seller that it was a gift, taken by a famous Alaskan photographer, and its subject was a fellow sitting upon a float plane’s spare tank—long ago abandoned in a leafy forest. The quality of the print was unmistakably first rate, and its sharpness suggested it was taken with a large format camera. So it’s hanging in my office now and there’s a story associated with it.

The photographer’s name is Kate Wool and she taught photography for 17 years at the University of Alaska, Fairbanks. She has switched exclusively to digital photography for a number of reasons, and still maintains an online gallery of  “film” projects  on her website.

She thoughtfully responded to my email inquiring about the photograph after I saw it on her site, and confirmed my suspicion that it was indeed taken with an 8 x 10” large format camera. As for the shoot, she wrote, “The story is simple but there is one. The fuel tank is an aviation fuel tank that lived in the yard of an old landlord. I lived in his cabin, behind his house in Fairbanks Alaska, and that tank was in the yard. I have scenes I see every day and therefore seeing this scene of yellow fall leaves (can’t see ‘em in the B&W photo) and tank, I wanted to photograph someone on it (and had in the past many times, including a pregnant woman).

The title of the piece, “Phuel Tank,” is a play on words due to the composition of the subject, a local musician still living in Alaska, sitting astride the tank in a manner than has phallic implications. She added that the photo has been in numerous local/statewide exhibits and in one International Artist Exchange in 2004 (Alaska~Netherlands) at the Markiezenhof, a couple hours outside of Amsterdam.

I enjoyed getting her prompt response to my correspondence and it validated my intuition. Learning about the process of art photograph is fascinating, and I periodically post information about items I have collected over the years. There is so much art, lovingly created, that sadly loses its provenance. But when hung for others to enjoy, that story is secondary to the pleasure it hopefully imparts.