Years ago, my good friend Brian Russell would regularly drop by Friday afternoons with an armful of vinyl records, many still encased in their original shrinkwrap. We’d pull ’em out, one at a time, and devour the liner notes—gatefold jackets were especially fun since there were often photos published with first editions. We’d then gently set the discs onto my Acoustic Research turntable, jack the volume on the vacuum tube amp, and savor every nuance of fabulous 70’s music blasting out of huge Marantz speakers. Brian had an encyclopedic memory for musical trivia and put it to good use volunteering at Pasadena City College’s community radio station, KPPC. He co-hosted a contemporary folk/country/rock show and new releases were regularly contributed by local record shops. With only soon-to-be classic albums in mind, he’d drop a chunk of his measly paycheck each week at Poobah Records and shared the best with me. Those were great times.

When our local chapter of OLLI (Osher Lifelong Learning Institute) offered the fall term class “Hands On Radio: KSKQ FM Community Radio” it provided me a way to revisit those wonderful Fridays from a different perspective. The class was well organized with a session each Wednesday afternoon devoted to a variety of topics: the history, logistics, legal issues, and program development of volunteer-driven community radio. In addition, 2 sessions were held at the station on Hersey St. in Ashland’s industrial park: one to introduce us to the facility by recording a community service announcement, and the second to actually go live on the air with a show of our own. My project partner, Corinne Vieville, and I produced a scripted show we’d thrown together that was designed to introduce the listening audience to the music of my daughter, Alicia. (Note: there actually WAS a listener and s/he expressed favorable comments via Alicia’s website.)

The concept of the show was developed a week earlier when Corinne heard me inquire about the possibility of broadcasting live music from the tiny studio. Alicia and her musical partner, Mark Karwan, will be visiting Ashland in late December and a live interview broadcast would be a neat way to publicize the show. Corinne mulled the idea around and thought that our project might include a short phone interview with Alicia coupled with two of her songs. That would easily fill the 10 minutes we were allocated and give us both the experience of presenting live.

Topic established, we brainstormed a storyboard of what we felt an audience would like to hear and how we’d present it. Corinne took the roll of narrater and I would be interviewed about the featured artist, Alicia. After consulting with her, we agreed that her original song Sandpapered Hills would be fitting because of its visual portrayal of the town she grew up in, especially now with autumn leaves producing their magic. A challenge arose when Corinne asked if Alicia could call the studio during our show for a live interview. Considering it  would air on a Wednesday afternoon when Alicia would be at work, I offered to record a FaceTime conversation on my Mac. The interview was conducted the Monday before our show, edited using the open-source software, Audacity, and all the parts saved in iTunes. Preceding each file with a number proved to be a blessing because they played sequentially and that eliminated the possibility of errors. 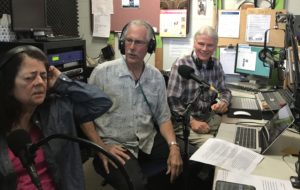 On our broadcast day, Sooney dropped me off at the studio where I met with Corinne and her guide-dog, Tulsa. She was excited and Tulsa simply gushed love. As if waiting for an audition, we nervously listened to a couple classmates doing their show. Things got a little dicey when, out through the studio monitor came a confident voice lamenting the arrival of gray pubic hairs in the garden. Their show was titled A Laugh On Us: A Hubris Slant on Navigating Life as a Mature Woman and raised an eyebrow or two among the listeners in the small studio’s lobby. Then came a station break and we swapped places with the wise sages on aging and settled into the 10′ square studio that was 80% buttons, switches, speakers and microphones. There were turntables, digital music selectors, and a funky oder from the sound-dampening carpet all over the place. It was, however, a special sanctuary to the scores of good folks who commit to a regular show; same time, same station. Many of them for years. What remarkable dedication—and all voluntary. With us in the studio was Ralph, a whiz with the controls who is comfortable with the title “sound engineer” although he acknowledged his role was more that of an operator. The real engineers were responsible for raising the towers on nearby hills and installing the translators that permitted our voices to be heard in Medford on another frequency (94.1 FM).

Our show went well and I’ve provided a link should you wish to hear an abridged version. Part of my learning process included dealing with the massive files created by these recordings and, when archiving our show, I was forced to edit the two songs we played in their entirety on Wednesday. Both songs are linked below (unedited) for your pleasure.

For additional information on this talented duo (including some recent recordings of Alicia & Mark), visit their website at aliciaviani.com. 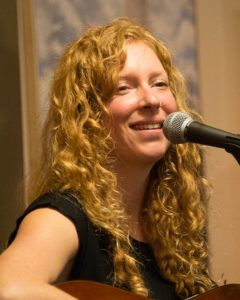 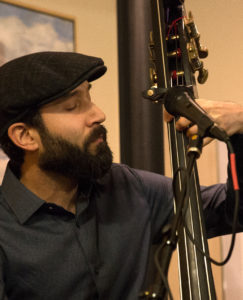