Cumberland Knob is a couple days north of Asheville and it was getting late. We’d already covered over 200 miles on the Blue Ridge Parkway and had plenty of daylight; there wasn’t going to be any hurrying on this drive-of-a-lifetime. And what a drive it is—no trucks, no billboards, and breathtaking scenery around every bend. It is windy but for someone raised with the Angeles Crest Highway in his backyard or, closer to Ashland, anyone accustomed to driving the Greensprings Hwy. learns mighty quickly that a windy road is simply a good reason to slow down and enjoy the views. And slow it was on the well-maintained 2-lane highway that plies the smooth ridges for 470 miles from mid-Virginia to the Great Smoky Mountains National Park in North Carolina. We only covered a mere 390 miles and culminated our journey in Asheville; 4 glorious days spent sharing the road with the occasional cyclist, motorcycle, and a Porsche Club way back on day one. We did see other travelers but there were stretches where we wouldn’t encounter another car for what seemed hours. (And when a speeder caught up with us, we just pulled over and looked for Warblers in the tall hardwoods in varying stages of leafing out). 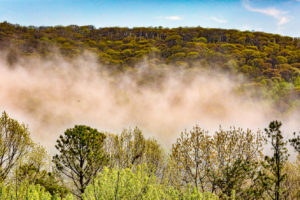 At the end of each day’s drive we’d let our phones recommend accommodations and that generally proved satisfactory. This particular evening we made plans to overnight at a Bed and Breakfast just off the Parkway in Gaylax (Gay-lax as in laxative) and made plans with Margo, the host, to arrive at 5:30. That gave us time for a short late-afternoon hike in the hills near Cumberland Gap. The birding was so-so (we did spot a Field Sparrow that was a new bird for us) but the highlight was the arrival of many species of wild flowers. In addition to Trilliums and Wild Iris, a low leafy ground cover caught our attention and a couple “mountain folk” we met on the trail explained that it was Gaylax, a plant favored by florists because of its lasting qualities when used in floral arrangements. They went on to add that carloads (the train kind) of Gaylax were shipped all over the US in the past, and it was that legacy for which the city was named. In addition to luxuriating at The Doctor’s Inn, we felt compelled to walk off our massive breakfast along part of the converted rails-to-trail winding along the New River for 57 miles. Early morning birding is usually better and Sooney ID’d nearly 30 species during our couple-hour stroll. I’ve compiled a gallery of east-coast birds for your viewing pleasure.

48 years ago about a hundred young adults (and one elderly former nun) gathered in Pepeekeo, HI, as newly sworn-in members of the Peace Corps. Asheville proved to be a wonderful location for the 36 who were able to attend this mid-cycle reunion in anticipation of our 50th in Ashland, OR. After enjoying Washington DC and our leisurely drive through the rhododendrons and azalea-lined stretches of hardwood forests characterizing the southern section of the Blue Ridge Parkway, Sooney and I got into the socializing big time and spent an equal amount of time in the woods and parks comprising much of Asheville. 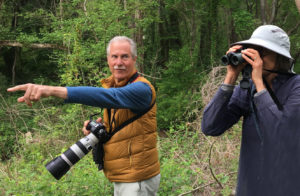 There’s an Audubon chapter there, and we joined them on their first-Saturday walk at Beaver Lake that coincided with the beginning of the eastern-flyway’s spring migration. Birds from as far away as South America travel north, some passing through allowing for a lucky glimpse while others nest in suitable habitat and are more predictable. Birding with guides is always interesting; they know when and where the birds are and often ID ’em solely on the birds’ songs. We enjoy doing this together, and Sooney has already identified nearly 600 species of birds since retiring 10 years ago. A couple years ago I discovered as much fondness for taking wildlife portraits as I did in my early twenties photographing friends, and generally wander a step or two behind Sooney, cradling my long lens as if it was a child while scanning the canopy to a soundtrack of sweet bird calls. The downside of packing a telephoto are the occasions when a panorama beacons to be captured; thankfully the ever-present iPhone fills the bill. 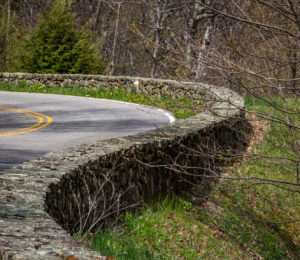 After 4 days, several group meals, and just enough touristy stuff under our belts, we bee-lined it back to Virginia for a couple days driving the Skyline Drive through Shenandoah National Park. This section of the highway was often bordered not by Rhodies and Azaleas but miles of low stone walls crafted in the 30’s by the CCC (Civilian Conservation Corps). Our last night was in Front Royal, VA, and we belatedly made visual connections with the Continental Congress we’d researched in anticipation of this trip. Throughout our journey there were monuments, museums, and memorials dedicated to the plight of the colonists settling in (and protecting) these same towns 250 years earlier. In addition to the statues and signage, we’d spot an ancient-looking building and wonder, “What stories do you suppose those walls could tell?”

Our final morning in Front Royal was spent, as you might expect, wandering along the mighty Shenandoah River flowing north along with its feathery companions. Huge sycamore trees had visible seed balls with leaves still leafing out and several species of Warblers and the gorgeous Orioles (both the Baltimore and the Orchard) were spotted looking for bugs and other tasty delights. We made it back to our motel right at check-out time, tossed our luggage into our tiny rental car, and headed to town for a final bite. 3-hours later we were in the Regan National Airport just outside Washington, DC, and ‘knockers and camera were finally retired. Probably best since our home in Ashland is peaking in spring glory. I’ve also scheduled a golfing getaway with some buddies and will be aspiring for a different kind of birdie—the one-under-par variety.