In So. Oregon’s nearby Cascade-Siskiyou National Monument free-range grazing has been the bane of monument supporters. Primarily due to the imbalance between rancher’s subsidized grazing fees compared to the repair of stream-bed and erosion damage associated with cattle. I was, therefore, a bit conflicted when we recently visited the Zumwalt Prairie Preserve in NE Oregon and smack dab in the middle of cattle country. The Zumwalt Preserve is the largest remaining areas of Pacific Northwest bunchgrass prairie in North America. And it’s flourishing, thanks to the cattle. There, I said it.

During the 3-days drive across the state, Sooney read aloud Marcy Houle’s book, The Prairie Keepers (Secrets of the Grasslands. Written in the mid-1990’s, the author confirmed the importance of cattle in the prairie’s overall health. The Zumwalt prairie is roughly 200 sq. miles area of un-tilled grassland largely owned by ranching families. It lays like a massive island locked in on 3 sides by mountains; its fourth border to the east plunges down into the cavernous Snake River gorge (comparable in depth to Arizona’s Grand Canyon). National forest land touches the northern section and the Wallowa Mountains and the Eagle Cap Wilderness flanks it on the south. To the west and north is “Palouse” country with unbelievably productive soil that has been an agricultural goldmine for centuries. Within that island are 51 sq. miles managed by the Nature Conversancy. The Conservancy’s mission reads: “To support and advance conservation across the larger Zumwalt Prairie, while also providing high quality and diverse habitat for native species on the Preserve. The Conservancy aspires to achieve and sustain conservation values in the context of sustainable livestock grazing as the predominant economic land use across this privately-owned landscape.” 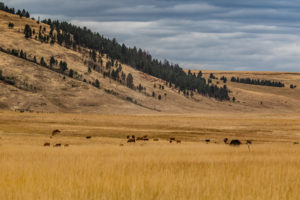 When grazing is done with a TOP priority given to the native vegetation and the ecological capability of the resource, ranchers routinely rotate their animals to different grazing areas to sustain their pastures. By cross-fencing their properties and creating stock ponds that protect natural stream banks, water resources are also protected. More significant to the health of the prairie is that cattle are “primary” grazers (as are elk, bison and caribou). These animals can eat low-quality forage and in doing so allow grasses and plants to sprout regrowth forage. “Secondary” grazers (deer, antelope, sage grouse and the ubiquitous Belding’s squirrel) depend on high-quality regrowth with its tender, juicy shoots. These squirrels commonly hibernate for 8 months, so come springtime they awaken with a voracious appetite. As the rodents multiply, the buteo-family of birds (Red-tail, Ferruginous, and Swainson’s hawks) have a more-than-abundant food source and coexist in close proximity with other members of their families. The ranchers love ’em because they keep down the rodent population. By the end of summer the cattle are trucked to their winter pastures, the wildflowers mostly have retreated, the Belding’s Squirrel has hibernated and, their food source gone, the buteos move on. During our visit in early-September, we saw the same two Red-tail hawks on two separate occasions: on our arrival and as we departed.

In addition to the potential birding and sheer grandness of the landscape, another reason for getting outta town was Rachel & Christopher’s wedding celebration encompassing the better part of a week of camping. Our intention was to camp with friends at the Zumwalt Prairie’s rather dark Buckhorn Campground. As it turned out, availability (and weather) compelled us to park our 5 rigs in the Hell’s Canyon Overlook parking lot. Good call. It was truly magic; multi-colored sunsets didn’t hurt a bit, and singing together with our band—on the rim of the canyon, no less—was epic. After a few days processing information gleaned from Marcy’s book, we headed west on a narrow, (nearly) single-track road (Dutton Road that morphs into Camp Creek Rd.) that dropped us just outside Imnaha, OR. From there, we boogied straight to Joseph for our 100-fold gathering of friends.

Being early-arriving guests, we spent the first couple nights camping at Wallowa State Campground in the primitive sites backing onto Wallowa River. The Kokanee Salmon were running up river to their spawning grounds, spiking the dark green water with bright red spawning gear. An American Dipper joined me one afternoon, s/he working far harder than me, bouncing around from rock to rock and dancing to some unknown drummer. Now and again, the Dipper would, well, dip and often come up with a tasty morsel. Most importantly, there wasn’t a hint of the forest fire smoke that had followed us north from the burning fields of Southern Oregon. Hallelujah!

After a couple nights on the southern section of Wallowa Lake, we repositioned our wagons to the wedding venue’s overflow parking area. It backed into a lower stretch of Wallowa Creek and hosted a resident Great Horned Owl, and a Pileated Woodpecker was another predictable visitor. Note: A week later we were visiting Sooney’s brother Jon way up in NW Montana where we saw a Woody binging on serviceberry fruits with the agility of a Chickadee.

The festivities began mid-week with a grill-friendly potluck. That was rightfully followed with a Friday night hors d’oeuvres & cocktails, and a wonderful Saturday game/musical day garnished with appetizers, cocktails, barbecue dinner, and music well into the night. And that was for starters. Anyone who hasn’t participated in a silent disco dance party is in store for a real surprise. You control the sound, the channel (up to 3 DJ’d dance tracks) and your moves. From the dance platform, other guests were seen wearing the ubiquitous headphones slightly higher on their ears to allow for conversation. At any given point, a mere wink, drop of the headphones, and one was back into the solitary company of the dance. One of those not tuned in commented what a trip it was hearing everybody singing the chorus to the Temptations hit—”Papa was a rolling stone, wherever he laid his head was his home”— in a cappella.

The following morning, we dutifully arose and, donning our requisite “best” garments, gathered at the venue for a 9am ceremony that included a heartfull (and heart tossing) event. Marty & Terry previously collected over a hundred “heart rocks” from the Oregon Coast and each guest was asked to toss their gifted rock into the Wallowa River with a loving wish for the newlyweds. That was followed with yummy Mimosas, a lovely latin-flavored brunch, and more bocce and beer. We were part of a remarkable extended-family gathering, and graciously wined and dined far more of each than we was accustomed to. Damn, but those Karlins know how to party.

We departed late Sunday afternoon and were en-route to Spokane when we happened onto Chief Timmothy State Park, a camping island around which the Snake river flows. After a night of harmonizing with a couple of Great Horned Owls, we plied Hwy. 195 on a seemingly-endless journey, up, down, and through a forest of sheared wheat fields comprising the Palouse. Scooping up sister Carol (Sooney’s elder) at the Spokane Airport, we proceeded northward and arrived at brother Jon’s (Sooney’s younger) at dusk. Yaak, Montana, is located 32 miles north on the Yaak River road that intersects with Hwy. 2 out of Bonner’s Ferry towards Troy, MT. Over the next several days, Carol ID’d several life birds and everyone relished the opportunity to re-tell family stories with the usual twist. And that’s just for starters.