A glorious autumn in Ashland delayed our departure for Tucson and our long-anticipated visit with brother Phil. Of course, a journey of this enormity wouldn’t be complete without visits with other friends and more than one wildlife refuge that kept us smiling with a wild variety of photo subjects.

Our first couple nights were at a new destination: Colusa-Sacramento River State Recreation Area CG in downtown Colusa. On several visits to family in Stockton (and pals in the bay areas) we’d seen a stand of buttes 20 miles east of I-5 that piqued our curiosity. Now we know. They were part of a wonderful birding adventure to new territory for us. While purchasing our day pass to the Gray Lodge Wildlife Area, the salesperson at the hunting supply store suggested we visit the Colusa National Wildlife Refuge first. Literally a 5-minute drive out of town heading south on Hwy. 20, this proved to be a wonderful opportunity to view a wide variety of birds. The predominate species was the Snow Geese, but Greater White-fronted Geese (called a “Specklebelly” by local hunters) and Northern Pintails and Coots happily shared the wetlands.

After hanging out on a viewing platform with hundreds of Pintails (and one Eurasian Wigeon), we proceeded on the 3-mile auto tour (being reminded rather impolitely that the signs requiring visitors to remain in their cars were posted for morons like me). I begged forgiveness and we drove on to wonderful sightings (of shorebirds,) More ducks, a Peregrine falcon with a bulging crop, and 3 species of hawks (N. Harrier, Red-shouldered and Red-tail). At the end of the loop was a Black-crowned Night Heron rookery and they were perfectly content to ignore us.

Eager to walk a bit, we returned to the parking area and strolled down a trail along a canal hoping to see an owl. A couple of friendly birders were snacking beneath a Turkey Vulture hanging out on some cottonwood branches, and we learned from them that nearby Gray Lodge Wildlife Area was really spectacular in the afternoon. Even better, walking along trails within the refuge was encouraged. Off we went and soon realized that our destination was in the shadow of those buttes we’d seen from I-5 so many times.

We arrived in the late afternoon and our first activity was a short walk to a multi-terraced viewing platform that offered a remarkable panorama of perfect conditions for migratory wildlife. Fall colors were peaking (we were, after all, in California and enjoyed a double autumn). Ponds were everywhere, separated from our view by stands of tules and grasses. Remarkably, the surfaces of nearly every pond was a shimmery white caused by several thousand Snow Geese yakking up a storm. 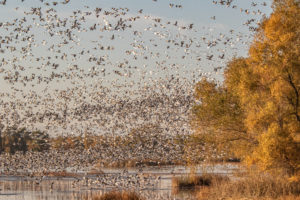 This area is protected from hunters but in the distance I heard the deep, throaty discharge of a shotgun. In an instant, thousands of the thousands of geese rose as if one and filled the sky with a breathtaking display of movement and sound. Birds were sweeping this way and that way, literally filling the sky so that in places there were momentary dark patches against the warmth of the setting sun. Never have I seen such an enormous display of sight and sounds. I was reminded of the grandly orchestrated fireworks finale we enjoy every 4th of July. The geese filled the sky and rose, dove, passed along the horizon left and right without any sense of landing. But eventually land they did, back into the same ponds, and calming cackles were all we heard as we continued on our walk.

The hiking path was laid out like a Venn Diagram and the trail intersected with the auto tour. Losing good exposure light was a concern along with an abundance of annoying insects, so we continued our exploration of the vast area in our truck. Nothing compared to our earlier encounter with the Snow Geese, but that’s not to say they weren’t around. As we finished our tour, a nearly full moon was rising and a loose formation of geese silently passed in front as if on cue.

The drive back to our campground in Colusa was along the western side of the buttes, and they were beautifully illuminated by the moon. We really didn’t have any idea where we were and depended entirely on the robotic voice of our phones, passing miles of almond orchards, all laid out in rectangular quadrants that had us turning right, and then left, and then right and so one. At one junction, I spotted a bright light emanating from an irrigation canal beside the road. Backing up to check it out, a fellow was stumbling out of the ditch, spitting dirt and complaining, “Now that turn was a bit sharper than I remember.” His motorcycle was a mess but discovering his phone had cell service he convinced us his aches, pains, and mechanical problems were nothing his brothers couldn’t resolve. So off we drove with his sincere thanks and assurance all would be just fine.

Our drive the next day was a short one to Merced to visit Peter and Lee Clark, friends from our Arlington days in Pasadena. That was a good time, and we love connecting with them whenever possible to remind ourselves what a good time it was. We arrived earlier than we’d expected and opted to visit nearby Merced National Wildlife Refuge. It appeared in healthy condition compared to our previous two refuge visits perhaps due to its smaller size, attention given to noxious weeds, more native plants and a greater diversity of birds. In addition to the ubiquitous snow geese was the friendly honk of a couple dozen Sandhill Cranes among the hundreds. We liked the place so much that we returned with Peter & Lee for a second auto tour and had a memorable visit with a Northern Harrier perched on some reeds just off the road. It’s fun to share our favorite travel activities with friends, and they may just become another set of birding buddies with whom we may share our next 25 years.