Pulling a trailer on Hwy. 99 is stressful. Trucks scream by on the left and vehicles calmly merging into my (slower) lane often require braking. The 3-hour drive from Merced to Bakersfield was no exception. All 4 eyes and my rear trailer camera were on alert. Making matters worse, most of the highway is strewn with litter and the dry, dusty conditions exacerbated air quality. We persevered with help from our recirculating air conditioning and a great audio book. At the end of that thankfully short day we overnighted at the Orange Grove RV Park, a short distance south of Bakersfield and recommended by other Ashland travelers. It met our needs for a roadside sleepover: it was clean, affordable, had power, water, and wifi, and was right on the highway for a quick getaway. A heavy crop of oranges hung from the numerous trees landscaping the park but were not ready for picking. A few Mockingbirds flew among them, a Black Phoebe waited patiently on the hurricane fence by the pool, and we agreed that springtime would be profoundly different with flowers and citrus fragrances perfuming the air. In no time we were rested and that was good because the next day was a doozie.

Our destination was Anza Borrego State Park just outside Borrego Springs, CA. We’d decided to avoid pulling our trailer on LA freeways whenever possible, but Hwy. 99 through Lancaster, Palmdale, Indio, and eventually Salton City wasn’t any less stressful. But LA it wasn’t and as we headed south toward Palmdale, we could see the Angeles Crest Highway winding down the San Gabriel Mountains. A pang of nostalgia hit us both when we realized it was on the other side of that range that we spent our youth. The Crest Hwy. originates in La Cañada, my childhood home town, and I spent many enjoyable days exploring the granite hideaways on my motorcycle.

With the San Gabriels framing the expansive Mojave dessert, my mind wandered to one of my first jobs as a Junior Camp Counselor at Clear Creek Camp, a Los Angeles Unified School District camp an hour from my home. I was probably around 13-years-old and spent 2 one-week-long session hanging out with the campers. At nights I bunked with the kids freeing the staff counselors with some well-deserved time off. Daytime activities included swimming, archery, and nature hikes looping out and about the camp. At the end of my 2 sessions I met with the head counselors for an evaluation and was stunned to learn I’d been graded something resembling “needs improvement” in a couple of categories. I don’t remember what they were, but am guessing maturity was one. I was crushed and, even worse, embarrassed by the tears that appeared. It’s funny how your deep memory plays games with one’s preoccupied mind. Long, monotonous drives are particularly vulnerable, especially while driving highways bordered on one or both sides by massive solar farms.

We arrived late in the afternoon and were grateful for having reserved site #90 online. It was pure luck to find that the site backed up to an expansive desert panorama. Palm Canyon Campground is barely a mile outside the small community of Borrego Springs, and while there is an RV loop featuring power and sewer hookups, we opted for the dry camping section farther into the canyon that was considerably more private and dark. The stars blazed above and there were bathrooms and a token-fed shower system nearby. We saved a couple quarters by heating up our solar shower during the day and bathing in the shower stalls. 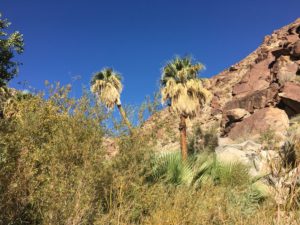 We spent our first morning exploring our canyon, and the early morning light and wildlife was lovely. The 1½ mile trail included some stretches in river washes, and triggered a memory from years past of playing in the hills above Altadena. In the early 60’s after graduating from St. Francis High School, I attended Los Angeles State College and commuted on my Lambretta motor scooter to save money. During one term my parents traveled for 6-months on a sabbatical leave and Phil Miller moved in with his dog, Fred. We enjoyed exploring the local hills and would run Fred while we leaped from rock to rock down the dry river beds. Pushing 75 years old as of this writing, that memory generated a chuckle as I now refrain from climbing a fucking ladder much less jumping off boulders. Ah, youth.

A windy dirt road into Coyote Canyon had us fording 3 streams until a formidable climb up a really rocky incline changed our minds about driving to Sheep Canyon. It wasn’t that our truck couldn’t make it but the trailer hitch interfered with our high clearance axels. Lesson learned for future 4-wheeling it. The weather was delightful and we finished the day photographing the metal sculptures in town commissioned by a wealthy land owner who wanted his legacy to include art installations in the desert. The artist is Ricardo Breceda who really went to work, and nearly a 130 of them are scattered in the playa surrounding town. The sculptures were inspired by creatures that roamed this same desert and include prehistoric animals, fanciful dinosaurs, and a 350-foot-long fanciful serpent.

As we approached a fabulous 20′ high scorpion, there were a couple women our age searching for something inside the structure. I waited a bit, patiently composing a photo against the deep blue sky that didn’t include them—or the idling truck nearby with their menfolk inside. They were persistent, however, so Sooney and I chatted them up and and refreshed our memory about geocaching. They had a phone app that provided clues where a hidden treasure (cache) resided. Somewhere in that statue was was a cache and they were going to find it, be damned. After reaching deep into places I’d never think of doing, one of them exhaled a satisfying “Ah-ha,” and extracted her arm holding a small tin box. It was a magnetic key holder that was repurposed for the geocache crowd, and inside was a die, some trinkets, a foreign coin and the all-important log on a tattered and multiple-folded piece of paper. After dutifully entering their names and the date, they re-hid the cache. Some folks add new trinkets and, sadly, some baddies, called Muggles, trash the treasure. The word muggle was adopted from the Harry Potter series of books, used to describe someone as non-magical. We must have missed that chapter on one of our travels.

After a day of significant rain, we again ventured out; this time to Fonts Point that overlooks the expansive “badlands” covering 15 x 20 miles and is appropriately named. You don’t want to get lost in there. From the overlook, bathed in late afternoon light, the view was surreal and we imagined what it would be to wander into one of those drainages. The next day we actually did get to explore the badlands, but from another visitor destination called “The Slot.”

We were en-route to the Sonny Bono National Wildlife Refuge on the Salton Sea (yes, after Sonny and Cher fame). Later in life (before losing it by skiing into a tree), Sonny became the congressman for a massive section of south-central California and the refuge was named in his honor. The Slot is an accessible ½ mile trail through a section of the Badlands that were, in some cases, quite narrow. The walls of the sandstone were smoothed by earlier flash floods and strata of ancient sea beds were displayed as if growth rings on a felled tree. The path was quiet and we had a private visitation with a friendly Rock Wren and a couple Ravens that stood in as sentinels above us.

This visit to Borrego Springs comprised the most consecutive nights we’d spent in our trailer in one spot, and all systems were go throughout our stay. Our departure day had us on the road for most of the day, destination Tucson and dear friend Phil Miller, and extraordinarily heavy rain didn’t make the drive fun. We nonetheless arrived at Phil’s beautiful home in the Picture Rocks section of Tucson in the dark—another situation we’ve agreed to avoid in subsequent travels. Entertaining us along I-8 was the stunningly clean desert and an audiobook of Trevor Noah reading us his autobiography, “Born a Crime.”