Following that freak storm down in Madera Canyon, we were ready for some normalcy and returned to Señor Miller’s for just that. Parked in his lovely front yard, we savored the fragrance and vitality of the Sonoran desert’s response to a monsoon-like rainfall. He thoughtfully dialed in some blue skies in the 70’s just for us.

En-route to Phil’s, we visited nearby Sweetwater Wetlands to check out the wildlife. Sweetwater is a water treatment facility, an urban wildlife habitat, and an outdoor classroom operated by the city of Tucson. In addition to birds, we had a close encounter with a Javelina (also known as a Collared Peccary) and wisely kept a safe distance from their sharp front hooves. Phil showed an interest in walking the nicely-laid out trails and returned with us for another shot at some new birds. While not a particularly rare sighting, he shared my excitement getting into portrait range to a Common Gallinule; we’ll make a birder out of him yet!

For some reason, my early years collecting postage stamps (thank you, Mom) seems a fitting metaphor for my current hobby of “collecting” bird species. But it’s more than simply filling a space in a stamp album. While visiting the Gray Wolf Area outside Colusa, Sooney and I spotted a Gallinule that was a considerable distance away. Later, at Sweetwater, Phil and I had a lengthy visit with the same species and it was particularly enjoyable to share the experience with him.   By no means was the Gray Wolf sighting demoted in its importance—it has been joined by yet another occurrence, this one a photo memory.

As we return to favorite photo destinations, it’s fun reliving a former photo shoot. In fact, quality time spent with a particular species often becomes the benchmark moment for that location. When revisiting a place (e.g. Madera Canyon) on this trip, I recalled with fondness the exact place where I’d seen (and photographed) a Hammond’s Flycatcher as it paused in an Alligator Juniper tree. Thankfully, my ticker is still pumping enough juice into my noggin to allow me those memorable moments.

Our dear friends and colleagues from Canadian Academy, Dave and Sumiko, live in Prescott, north of Phoenix, and we coordinated a camporee at Catalina State Park in Tucson. Located about an hour across town from Phil’s, its location is unusual in that it’s sandwiched between 2 distinctly different environments: a magnificent range of peaks on one side and a huge strip mall across the Oracle Highway on the other. We had no difficulty distancing ourselves from the congestion nearby, and walked the designated “birding” trail a couple times with different experiences. We were 15-minutes into our first walk and saw a cluster of trees filled with sparrows, yellow-rumps, a cardinal, and Verdins. All were flitting in and out and clearly enjoying a variety of juicy berries. Not far away was a Ladder-backed Woodpecker, its bright-red topknot a blur as it dissected a stump in search of insects. This small section of desert forest was alive with motion and sound.

The following day, hoping for more of the same, we experienced absolute silence. Suddenly, a Cooper’s Hawk strafed us—barely 10 feet over our heads—with an obvious warning shot that we were in its territory. It landed within binocular’s range and squawked a bit before flying to nearby tree. We approached slowly and the handsome bird posed for several minutes before moving on. Cooper’s Hawks feed on smaller birds, and it’s possible that its presence shut down the feeding frenzy we’d observed the day before. Perhaps more salient is the validation of our intent to remain in one campsite long enough to revisit favorite areas. Our “birding” trail experiences were equally valuable and significantly different.

Dave and Sumiko joined us for that second loop along the trail, and the snails pace we keep allowed us to catch up. The following day, Phil joined us and we checked out the “nature” trail. It’s our contention that birds (and wildlife in general) don’t read signs and would most likely appear on both trails. Not so, and due to a completely different food source and habitat we’d seen the previous day. With one exception: a Greater Roadrunner that’s always fun to watch. The closer we got to the creek that, we spotted a Coatimundi lounging in the crotch of a Mesquite Tree, its ringed tail cascading below the adorable animal as if an afterthought. This was a fitting closure to our visit with Phil as he’d never seen a Coatimundi in the wild.

We laid over an additional day to spend with Dave and Sumiko, and that meant covering more highway than usual in order to make it back to Ashland in time for some engagements. We made it home in four days, with books-on-tape and favorite podcasts keeping us entertained. 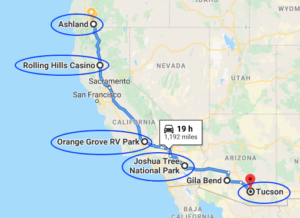 Our route home consisted of a lovely one-nighter at Cottonwood Campground in Joshua Tree National Park (Indio), an in-and-out of the Orange Grove RV park (Bakersfield) where we stocked up on ripe oranges, and a long day on I-5 to the Rolling Hills Casino (Corning) for our final night. That left an additional 4-hour slug through Shasta and the Siskiyou summit, and fortunately an earlier snowfall had melted making conditions far better. Earlier in the day, however, heavy rain near Redding caused more than one accident so I tightened my knuckles on the wheel while Sooney filled me in with all the gory details. We’ve grown to enjoy plugging along in the slow lane with everyone (basically 18-wheelers) zipping by for whatever reason.

We began our trip listening to a book titled Nomadland, by Jessica Bruder, that explores the dilemma of older Americans traveling the country like “nomads” in search of employment. Seasonal jobs with Amazon are common, and the book goes into considerable depth how many economically-challenged adults are living in vans (often in creative ways) near Amazon distribution centers where they fill orders for minimum wage and struggle to get along. It wouldn’t surprise me that there’s a correlation between those jobs and the huge percentage of truck traffic plying our interstate highways. MANY are Amazon Prime vehicles, and due to the extremely expensive cost of warehouse facilities, Amazon has structured its guaranteed 2-day delivery promise by funneling merchandise into these distribution centers. The goods (much of it crap from China) are then dumped  directly into trucks for delivery to fulfillment centers. In doing so, Amazon has repurposed our Interstates into more affordable warehouses on wheels.

Thankfully, they cared very little about a little pickup with an even littler travel trailer noodling along in the slow lane. We’re safely home and looking forward to a trip to Florida in barely a month. Yikes!