While sitting around a smokey campfire alongside Lemolo Lake, a number of thoughts erupted that provoked some interesting conversation. It was a strange experience,  a flow of consciousness seemingly connected although vastly disjointed. During the 3 days hanging out with friends and enjoying our new hard-shelled kayaks, there was plenty of down time to make some notes and see what comes of it.

Years earlier I was admonished for tossing orange peels out the window of my car. My intention was to both to discard the fruit skins while adding compost to the forest. Sadly, my contribution was incompatible with the indigenous plants we were driving through, and I was busted. Sure, orange peels will eventually decompose, but their shriveled remains look a lot like trash. For a long time. I probably responded with a meek, “I never thought about it like that.”

A friend related an experience in South-east Asia where an expat tossed a can into a ditch littered with other cans and garbage. When asked why he did that, he replied, “What’s the difference? There already is trash (the indigenous landscape) so I’m not contributing to the problem.”

An anecdote from the early 60’s comes to mind where 2 brothers were driving and, you guessed it, the younger brother tossed a soda can onto the shoulder of the road. The older brother came to a stop, put the car in reverse and, returning to the site of the crime, placed the evidence into his vehicle’s trash bag. A gentle, but impactful, admonishment followed when he reminded his brother, “I don’t do that.” The embarrassed younger brother honestly admitted, “I didn’t even think about it.”

Perhaps intoxicated by the campfire’s smoke, it seemed clear to me that there’s a kinship between the guy knowingly adding a can onto an already cluttered road in Indonesia, between the younger brother unconsciously relieving the car of ½ an ounce of aluminum, or me carelessly cluttering the indigenous environment through which we were driving. Apparently none of us had yet developed adult values about how to contribute to the health of the natural world. 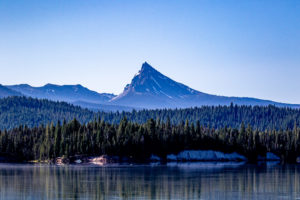 Lemolo Lake is in the Umpqua National Forest, maybe 10 miles from Diamond Lake, and lies in the shadow of mighty Mt. Thielsen. One morning I grabbed my camera and went looking for birds along the road around the lake. It wasn’t too long before I came came upon an aluminum can—a fresh one by the look of the bright Pepsi emblem on it. My attention was piqued in a weird way because I’m accustomed to seeing beer bottles and cans along roadways. Not pop. I’d always assumed that anyone stupid enough to drink and drive had at least enough sensibility to discard the evidence on board. Out it goes. But to toss a Pepsi can, with a bounty of 10¢ no less, makes absolutely no sense. The jerk would most likely fall into the “I didn’t even think about it” category.

Fast forward to the Racial Pandemic. Nearly 2 months following the murder of George Floyd, protests continue to pound down the fact that for 400 years slaves and Black,  Indigenous, and People of Color (BIPOC) have been treated as second-class citizens. That became even more salient when an article in a recent (7/7/20) NY Times suggested that people are becoming afraid and historically “didn’t even think of it (racism).” The article adds that they’re afraid our country’s falling apart and fearful of what we’re leaving our kids and future generations.

Even worse is the debacle our current administration has created mismanaging this Covid Pandemic. I read their strategy as an attempt to discredit media attacks about the government’s abysmal management of this global scourge as a diversionary strategy to foment the sensibilities of those opposing the protesters and to discredit the fundamental sensibilities of those protesting. Weird, huh?

A pitcher for the Washington (DC) Nationals declared he would NOT be joining his team for the abbreviated season due to start in a couple weeks—if it starts at all. His reasoning is insightful: “We haven’t done anything that other countries do to bring sports back. Sports are like the reward of a functioning society.” I don’t see sports reappearing for a long time.

At some point we all need to accept responsibility for past digressions, and pull our heads out of the sand. For too long we, the white privileged, had  acquiesced inequality with a generic “I didn’t even think of it.” I’ll admit that I haven’t (and probably never will) watch the George Floyd murder video but that doesn’t diminish the impact the event has had on me. It’s hopeful that more and more people are waking up and paying attention. Is it because they’re finally afraid of what they see around them? Perhaps. Or is it the result of what Sooney read somewhere: “We were punished and sent to our rooms to think about what we did wrong.”