We purchased our Escape21 travel trailer over a year ago with the intention of using it as temporary lodging when hosting public land. That opportunity has not yet been offered although we have spent over 70 nights in our rig. Recently, we took a short road trip that had us parked in Alicia’s driveway for 4 nights that provided us time to catch up in real time and a couple days on the water (Dillon Falls and Hosmer Lake). We followed that with 5 nights in the Summer Lake Wildlife preserve. That visit was particularly illuminating (not only by the full mood that cast vivid shadows as we wandered about at night) but by our opportunity to familiarize ourselves with the surroundings. Fortunately, we arrived a couple weeks before the opening of duck hunting season and strongly suggest that prospective visitors perform due diligence when planning a fall trip.

The length of our stay validated my desire to camp in a place long enough to really get to know it. 5 days may not seem like a particularly long visit, but on two occasions we were able to share special bird species with friends who stopped by for a night each.

The first was a Sora. From the Ana Creek Campground where we dispersed camped, we walked east about a half-mile on the dike road early one morning with the light a warm Kodachrome peach. We continued until we could see the large willow tree that’s the landmark of the next campground in he distance. On the right side of the road are reeds that are especially suited for American Bitterns. On one walk, we startled 6 birds at different times. Generally, it’s quite an event to see even ONE!

Further up the path is a more spacious lagoon featuring a water depth measuring post, and on 3 separate days we saw a pair of Soras treading lightly on the dense algae, ripping it up in search of insects. We took both our visiting friends there on consecutive days and were successful each time. An additional highlight was a Black-crowned Night-Heron partially hidden in the reeds on the far side of the pond.

On our way back to the campground is a solitary Russian Olive tree standing sentinel alongside the dike. This tree, as well as others in the area, was in full berry mode and we observed many species of birds gorging on the fruit. From a distance we saw the unmistakable silhouette of a Great-horned Owl resting after a night of hunting. Farther up the road, Sooney spotted a Virginia Rail prowling about, probing for munchies. We saw what we think is the same bird at about the same area of the canal on a previous day, reinforcing the privilege of familiarizing ourselves with our environment. 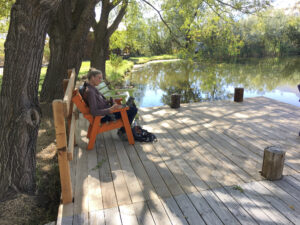 Another interesting sighting was at the Summer Lake Lodge where Sooney was piggy-backing on their WIFI for an OLLI zoom session. On the far side of the pond were several Russian Olive trees, and a couple male Wood Ducks were flying up to berry clusters and eating them right off the tree. A couple Mallard ducks weren’t so well endowed, and managed to get their snack by flying up to the berry cluster, whacking it off, and then tumbling unceremoniously back into the pond with a splash. Although a remarkable adaptation, the style points were unanimously awarded to the Wood Duck.

On our final day we opted to explore nearby hotspots, and headed out early toward Fort Rock. An easy 30-minute drive from our campsite in the Refuge, we took Hwy. 31 nearly to Silver Lake and suggest turning on Picture Lane toward Fort Rock. From there, it’s a short distance along a dusty road to the State Park. From that intersection, we continued 8.3 miles farther to the Cabin Lake Forest Service Station. Rather than park there (and walk through the deserted collection of weatherbeaten structures), we recommend continuing an additional .2 miles to the entry of some dispersed camping options. Turning left into that dirt road—and keeping left—will take you to the rear entrance of the Service Station and where the birding blinds are located. 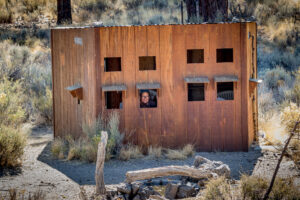 The East Cascade Audubon Society maintains the two blinds, and they were wonderful. Water is available nearby and the birds take turns flocking to the moisture. In a relatively short time we saw a predominance of White-crowned Sparrows and all three Nuthatches (Pygmy, White and Red-breasted). Every now and then, other birds would drop by: a Clark’s Nutcracker, Red Crossbills, and both male & female White-headed Woodpeckers. Toss in a variety of other Sparrows and Chickadees and you can imagine how much fun it was. (Another birder we met said he’d seen a Williamson’s Sapsucker but we weren’t that fortunate). While checking out the road to the rear entrance, we passed a hunters campsite that we hope to use during a subsequent visit. The only issue is how to seal our trailer from the micro-fine dust that penetrated everything.