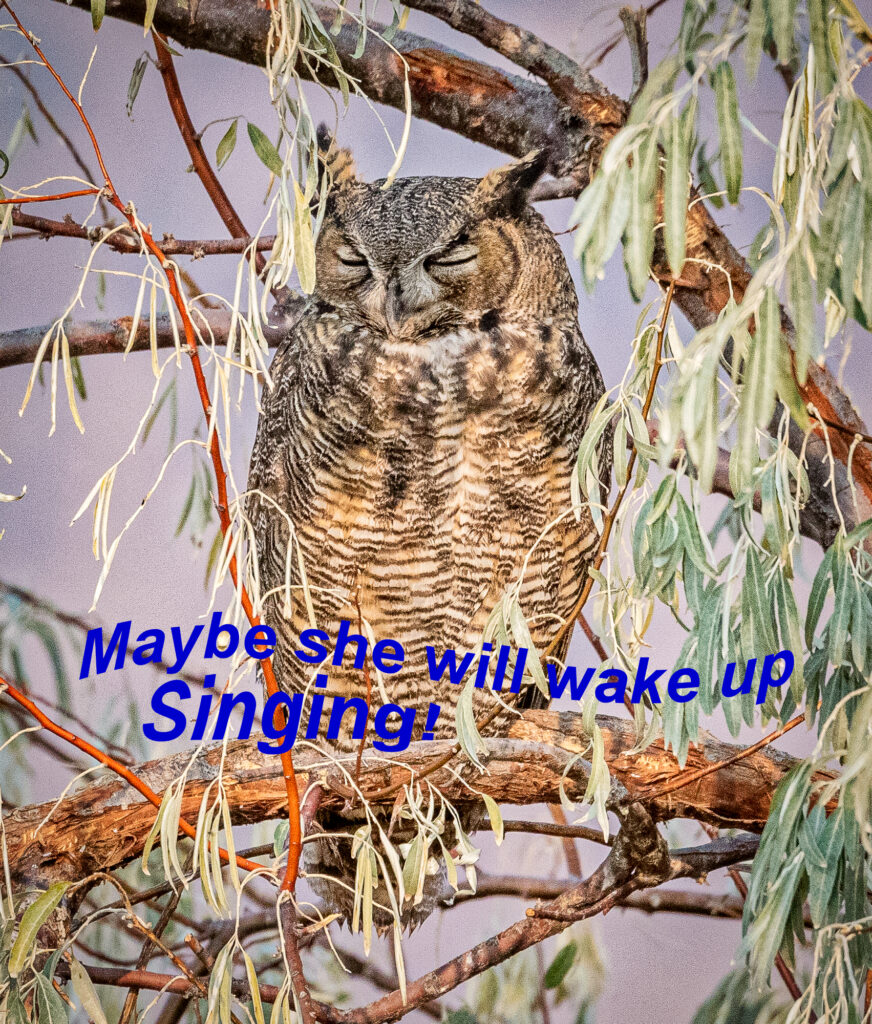 Visual and literary art have a long-standing relationship, and drawing poetic inspiration from art is called “Ekphrasis.” The form’s major goal is speculating or expanding on the original art’s meaning. My attempt at ekphrasis is a bit more like imagining, “What if…?”

Sometimes a line from a poem can hold its own in isolation from the poem itself. The poet, Richard Aiken (also a painter and photographer), wrote an ekphrastic poem, Dots Everywhere, quite possibly his reaction to the creation of an image or painting of his own. In it is a line I paraphrased for this piece: “Maybe we will wake up singing.”

This Great-horned Owl was photographed during our recent visit to Summer Lake Wildlife Refuge. In its original form, we see the slumbering owl, captured in early morning light, and ostensibly resting from a night of hunting.

My adding a literary component to this photograph was inspired by my study of Corita Kent, both a visual and literary artist from the 60’s. She collaborated with poet, Joseph Pintauro, on several books, and on one of the dust jackets is quoted: “The purpose of art is to alert people to the things they might have missed.”

Corita made an art of combining word and color to create images, and it was poetry upon which her creations were focused. A poem, freed from the confines of a book, is integrated with the colors, the design, and the image; all important elements of her art.

The birthday of a dear friend provided me the opportunity to illustrate a card with more than a significant photo (the significance being that we shared the sighting of this owl in the Refuge). Photoshop has long been the tool of choice with graphic designers in the advertising world, and the overlay technique was a simple solution for me to create my own attempt at ekphrasis. And a fitting tribute to dear Barbara it is.