As regular visitors to Oregon’s wild outdoors, it’s not unusual to spot the graceful Northern Harrier swooping up, down, and around rural grasslands and fields in search of prey. Almost playing in the wind, the graceful Harrier rides the gusts and then veers into a dive with the keen eye of a hunter. Many times the bird disappears out of binocular range, and other times simply settles into tall grasses to a nest, a rest or, even better, a meal. It’s always a pleasure to watch the Harrier fly, and even more fun to catch one in the camera’s viewfinder. What goes on in those remote high grasses has always been a mystery due to their secretive nature.

On our most recent visit to Summer Lake Wildlife Area (about 100 miles southeast of Bend, OR), we got a front row seat to actually see what brings those birds down to earth. A male Northern Harrier—colloquially known as a “Grey Ghost” due to its coloring—was hunting near our campsite. We were in the process of breaking camp, and Sooney, my wife and birding mentor, was alerted by a noisy commotion outside our trailer.

Across the canal, barely 30′ from where we were standing, a male Harrier had attacked a female Blue-winged Teal duck and was drowning it in the shallow water. Moments earlier, this nutrient-rich water was resplendent with, in addition to the Blue-winged Teals, a pair of Cinnamon Teals, Willets, Black-necked Stilts, Least Sandpipers, and a couple Coots. All were peacefully going about their business and then WHAM! Sooney heard undisputed alarm/warning cries and all our attention focused on the Harrier and the hapless duck.

The Harrier’s method of killing appeared rather straightforward: sit on your victim’s head until they succumb. To its credit, the female Teal gave the smallish hawk a bit of a fight—struggling to the surface for air a few times—but powerful downstrokes by the raptor forced the duck down and in about 10 minutes it was all over.

Meanwhile, the ducks and other critters that were frequenting that stretch of water had split with the exception of a couple of Coots and a lone female Blue-winged Teal, an apparent companion of the victim. She swam back and forth in the now-calm water, no more than 5′ from the attack. The Teal was audibly grieving, emitting a fragile, almost plaintive, call while holding a vigil for her fallen companion. In time she, too, disappeared.

Before dismemberment could begin, the duck needed to be beached. This was quite a task as the Teal was waterlogged and, by now, considerably heavier than the Harrier. Nevertheless, through a combination of several lifts of its prey, the cadaver was successfully transferred to the shore where the butchering began. Methodically, the hawk began removing feathers with a pull, then spit, routine that soon resulted in a feathery mess reminiscent of wildlife kills we’ve seen elsewhere; a pile of feathers and little else. 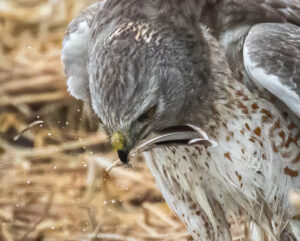 We connected with a birding expert in Malheur later during this journey, and I inquired about the method of killing by various raptors. A bite to the cervical vertebrae is a falcon characteristic. They even have a notched beak to do the job. But this Harrier never demonstrated that behavior and patiently waited for the poor duck to drown. Sooney noted when looking at the photographs that there wasn’t any apparent emotion expressed throughout the act. Just an occasional scan of the area to make sure wily Coyote hadn’t been alerted by the bedlam moments earlier.

A good 45-minutes into the feast—the moist entrails were last, as if swallowing large, juicy worms—the satiated hawk began the process of moving the carcass to a secure cache. Its cargo now considerably lighter, the hawk, through a succession of lifts, drag, lifts, and more dragging, successfully moved what was left of the bird into some nearby clump grass. Its meal partially hidden from sight, the bird paused momentarily to appraise his efforts and, apparently satisfied, flew off, talons heavy with attached viscera.

We excitedly reflected back on some of the more poignant moments during the past hour. Never having seen a Harrier kill prey, we speculated how common an occurrence this was. Clearly, the hawk was in charge and demonstrated what appeared to be a textbook dispatch in the refuge. Another colloquial name for the Harrier is a “Marsh Hawk,” and the behavior we’d just witnessed fully supports that moniker.

But there was more! Moments later, the Gray Ghost flew back to the cache accompanied by the female Harrier, a darker beauty with the characteristic owl-like face. We surmised his intent was to show her where he’d hidden the meat. In retrospect, we’d just witnessed a once-in-a-lifetime demonstration of a predator/prey interaction and the epilogue that followed will simply remain conjecture.

From a documentation perspective, there was sound data. Attached to digital photographs is the date and time a photo was taken. From beginning to end the entire process, comprising more than 1,500 shutter clicks, was captured in a little under an hour! My only regret was not asking Sooney to fetch my tripod and stool as holding that heavy camera began to wear on me.

The remainder of our trip, while not nearly as dramatic,  consisted of a couple nights camping at the Malheur Field Station that was highlighted by a Great Horned Owl nest with 3 sad-eyed puff-balls in the nest. That was followed by 4 nights at beautiful Page Springs featuring yet another Great Horned Owl nest, this time with 2 fledges. Throughout the week, Sooney tallied over 100 species and quite a number of them have been added to the gallery accompanying this dispatch. It’s hard to believe that after processing the hundreds of photographs taken during the week, we’ve switched gears and are preparing for our long-awaited 4-week pelagic birding adventure in Alaska. Stay tuned.

Here’s a link to the sobirds.us site where I maintain a searchable database of wildlife photos.